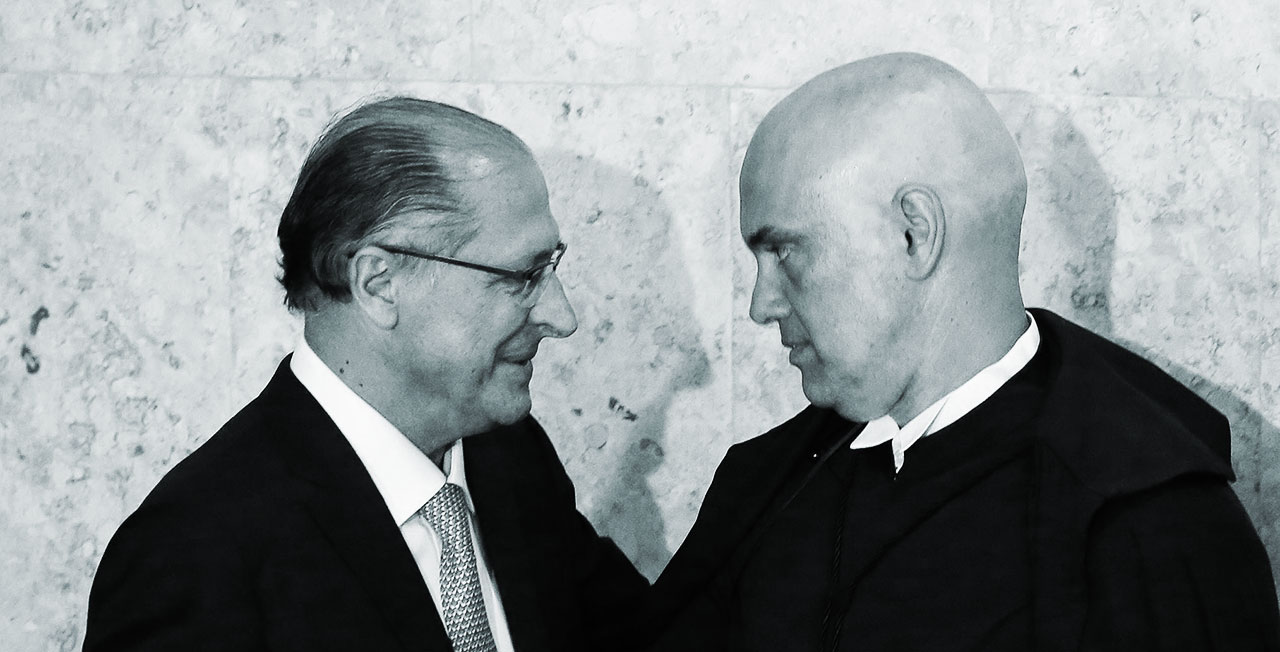 The Protection Of Geraldo Alckmin

In the words of a prominent Brasil-based journalist in June 2013: “There is an unwritten understanding amongst foreign correspondents that the US wants PSDB in power”

This did not go unnoticed, with Winter already notorious for alleged censorship, while working for Reuters in Brasil, of PSDB involvement in the Petrobras corruption scheme [the so called ‘podemos tirar se achar melhor’ (we can take this out if you think its better) scandal], and having also ghost-written PSDB grandee and US-backed former President Fernando Henrique Cardoso’s autobiography.

Founded in 1988 by Mario Covas and other dissidents from PMDB, PSDB is literally translated as the Social Democratic Party of Brasil, though actually conservative in practice. PSDB has been called less a political party, more a group of rich white men who want to be President. Last winning a Presidential election in 1998, with ample US Government and Wall Street support, which was quickly followed by a grave economic crisis and IMF bailout, in the words of a prominent Brasil-based journalist in June 2013: “There is an unwritten understanding amongst foreign correspondents that the US wants PSDB in power”. Though defeated at the polls, they came to power again in 2016, as part of Michel Temer’s post-coup administration, with Aloysio Nunes the US State Department’s effective point man during that process.

Again a Presidential hopeful, though lagging in the polls, Geraldo Alckmin had just spent a symbolic 24 hours in the crosshairs of Lava Jato, the very anti-corruption operation that Winter, his employer, and its patronage network of aligned journalists have spent the past 4 years promoting internationally, as if the key to the country’s future.

Each time a PSDB politician is publicly connected to Lava Jato, even fleetingly, local and Anglo corporate media stooges alike laud this as an example of the operation’s impartiality, dismissing accusations of bias, and usually falling silent when, almost without exception, the cases against them are dropped or permanently shelved, no matter what material evidence is in prosecutor’s possession.

Lava Jato has been accused of being a politically motivated operation since the beginning, and these early suspicions are becoming irrefutable fact. To illustrate this, Alckmin’s case, involving massive systemic corruption of the very type the operation was ostensibly designed to combat – rather than the flimsy “triplex apartment” and “undetermined acts” case which saw Lula convicted – was removed from the jurisdiction of the Lava Jato task force, and moved to that of a local electoral court, where it will certainly die.

Beaten by Lula in 2006, and traditionally portrayed as a centrist moderate by Anglo media, Alckmin is a supporter of Opus Dei, and authorized the use of tear gas and rubber bullets against high school students during their occupations of 2015.

In June 2013, Alckmin was also answerable for the Military Police repression, including firing of rubber bullets and tear gas on journalists, which turned protests against fare hikes into a national wave of demonstrations that moved rightward, gained the support of Globo and threatened the very survival of a President (Rousseff) who just one month prior had enjoyed around 70% approval. In then São Paulo Mayor Fernando Haddad’s own words “we will never know” if Alckmin himself gave the order to fire on journalists.

Alckmin likes to portray himself as a depoliticized technocrat and an efficient manager. In 2014/5 São Paulo suffered from it’s worst water crisis in recent history. Though suffering drought, local hydric engineers pointed out that during 20 years of PSDB state governments in São Paulo, during which Alckmin served as Vice Governor from 1995-2001, and Governor from 2001-2006 and 2011-present, the population of the São Paulo metropolitan area grew by 6 million but nothing was done to expand water system capacity. Instead, the PSDB governments partially privatized the state water company, SABESP, which instead of investing in infrastructure re-routed profits to the New York Stock Exchange. The results of this catastrophic management error were seen when the population in large swathes of the São Paulo metropolitan region were forced to ration water. At the time, he was further criticized for prioritizing agriculture and industry, in particular sugar cane crops for ethanol production,  over domestic consumers in poor neighborhoods.

During the course of his governorship, Alckmin has been implicated in several cases of corruption. When a whistleblower in Seimens released material evidence proving that bribes were paid to Alckmin’s government to win public infrastructure contracts for the train system, and when the French corporation Alston admitted that it had bribed officials close to Alckmin to win the contract for expanding the metro system, neither case went to court. The total amount of bribes uncovered in these two cases was R$425 million. The specific allegations against Alckmin that were uncovered as part of the Lava Jato investigation are based primarily on three plea bargain testimonies and allege that his 2010 Governor’s campaign organization received R$10 million in illegal contributions from Odebrecht construction company. In removing this case from the Lava Jato investigation and bumping it down to an electoral court in São Paulo, where it will be heard in secrecy, and where the vast majority of judges are supporters of the PSDB party, it is clear that the risk of Alckmin being banned from running for president this year is over.

Alckmin’s treatment compared to the politically-motivated prosecution of former President Lula, and their respective depictions by those representing powerful vested interests, such as Winter, or organisations in collaboration with them such as Transparency International (whose main sources of funding are Shell, the UK and US Governments), are frankly ridiculous, and should be widely denounced.

Even the Guardian’s Jonathan Watts, whose first post-coup headline lauded the profoundly corrupt Michel Temer as “the man who could fix Brazil”, has now publicly expressed skepticism about Lava Jato’s neutrality and that of Brasil’s justice system as a whole.

However, the symbolic spectacle of Lula’s arrest sated an atavistic conservative bloodlust, one which had been stirred up over the decades in a media-led character assasination, even spreading to his depiction as the devil himself to evangelical congregations. There’s no coincidence there – neopentecostalism was itself exported to Latin America since the 1970s, envisaged as a societal & cultural balwark to counter what the US (Nixon envoy Nelson Rockefeller on his 1969 visit) had identified as “National Security Threat” of left-wing Catholic Liberation Theology, which itself was one of the foundations of Lula’s Workers Party (PT), and one that helped bring about the end of Military rule. With those old US-backed regimes removed from power, a US-led “War on Corruption”, beginning in 2002, was, in their own words, a solution to the “National Security Challenge” of democratisation in Latin America. Three Presidents later, in 2017, the US Attorney General Kenneth Blanco publicly boasted about the Department of Justice’s informal involvement in an operation that resulted in imprisonment of the leading 2018 candidate, a transnational collaboration which breached Brasil’s sovereignty and constitution.

Now nearing its end, Operation Lava Jato has so far resolutely failed to bring about its stated objective of eliminating systemic corruption, yet delivered on manipulating Brazilian politics, tearing up its constitution and ransacking its democracy, to the benefit of local elites and foreign capital. Like a proxy belligerent in a civil war, and having decimated the economy as collateral damage, Lava Jato is morally dead, and so should be the credibility of anyone still maintaining public faith in it.

With the left’s electoral front runner in jail (though still standing), and in second place fascist Jair Bolsonaro (now threatened with prison), who has in the past said he would call a Military Coup on his first day in office, these oligarchies at home and abroad need an Alckmin. No matter how authoritarian the country continues to shift, they need him, or someone like him because he represents their interests and protects their privileges, but is also the closest they have to a candidate whose victory could be made to look like democratic business as usual.

For these interests, an imagined second round runoff between Alckmin (or Marina Silva, Henrique Meirelles, Joaquim Barbosa or another Wall Street endorsed runner) and Bolsonaro, with the left having no choice but to vote for the former to keep out a fascist candidate – akin to what has twice happened in France – may be considered an ideal outcome.

For those ends, they will protect Geraldo Alckmin at all costs.

Main image: Geraldo Alckmin and Alexandre de Moraes, his former São Paulo security secretary, post-coup justice minister and now the Temer-appointed Supreme Court Judge who replaced Teori Zavascki following his death in an unexplained aviation accident. De Moraes was one of the 6 to 5 on the Supreme Court who voted against habeus corpus for former President Lula, condemning him to prison.