UPDATE 3/10/17: Jair Bolsonaro has been prosecuted and fined R$50,000 for his racial slur against Quilombola communities.

A campaign has been launched to urge George Washington University to cancel Bolsonaro’s scheduled appearance.

On Monday the Clube Hebráica of Rio de Janeiro, a social and sports club for members of Rio’s Jewish community, hosted a speech by former Military federal congressman and 2018 Presidential Candidate, Jair Bolsonaro.

Bolsonaro has been described by Pulitzer Prize-winner Glenn Greenwald as “the most misogynistic, hateful official in the democratic world“. He once told a female colleague in Congress that she was not pretty enough to deserve raping. He has remarked that feminists are good for only one thing – oral sex. He has a long history of homophobic outbursts and peddling prejudice and hatred against LBGT communities. He dedicated his vote to impeach President Dilma Rousseff last year to the colonel who ran the torture centre where she was held as a political prisoner of Brazil’s military dictatorship in the 1970s. Racist Bolsonaro is on record as pro-torture, and that tens of thousands should be killed for Brazil to function.

According to some polls he is currently the most popular candidate amongst Brazil’s wealthiest 5% for next year’s Presidential election.

In his speech yesterday to about 300 of the most well-to-do members of Rio’s Jewish community, Far-Right Bolsonaro ranted against the allowing of Syrian refugees into Brazil, and said that if he becomes President he will abolish indigenous reservations, that Quilombolas (descendants of escaped slaves) are obese Africans who want to live off the government, and remarked that he has five children, but that he screwed up once, and one of them was born a girl. He was roundly applauded.

Any public/covert international support or legitimisation of Bolsonaro and his candidacy should be given maximum scrutiny over the next 18 months.

Federal deputy Jair Bolsonaro (PSC-RJ) gave a speech at the Clube Hebráica, in Rio’s South Zone, on Monday (03/04). While 100 people protested outside, another 300 crowded the auditorium. According to Estadão, the presidential candidate promised that he will end all Indigenous reserves and Quilombola (African Slave-Descended) communities in the country if elected in 2018.

“You can be sure that if I get there (Presidency), I will not give money to NGOs. If it is up to me, every citizen will have a firearm in the house. We will not have one centimetre demarcated for Indigenous reservations or Quilombolas.”

In February, in Paraíba, Bolsonaro suggested giving rifles to farmers “like a Business Card” to use against the MST Landless Workers Movement.

The deputy said that Indigenous and Quilombola reserves disrupt the economy: “Where there is indigenous land, there is wealth beneath it. We have to change that.” He claimed to have visited a “Quilombo”, and returned with the following insight: “The slightest Afro-descendant there weighed seven arrobas (An old unit of measurement mainly used for Livestock). They do not do anything. I do not think they even serve to procreate any more. More than R$1 billion a year is spent on them”.

The presidential candidate did not spare refugees either: “We can not open the door for everyone,” he said. But he was not averse to all foreigners: “Has anyone ever seen a Japanese beggar? It’s a race that has a sense of shame.”

Demonstrators were gathered outside, brought out by youth movements from the Jewish community. They held banners and shouted slogans such as: “Jews and Zionists do not support Fascists.” “Whoever allows torture has forgotted the Shoa.” “For life and for peace, torture no more.” A group of women chanted, “He supports rape.” (in reference to his rape threat and remarks in Congress against Congresswoman Maria de Rosario).

Currently in fourth place for voting intention for 2018 Presidential election, with 9% according to Datafolha, the Congressman has generated division in the Jewish community. The president of the club in Rio, Luiz Mairovitch, invited Bolsonaro after he was barred from a similar event at Sao Paulo’s Clube Hebráica.

At the beginning of his speech, the deputy spoke of his reputation: “I’m not good, no. But the others are very bad. They smear me so much and I still keep rising in the polls. “ 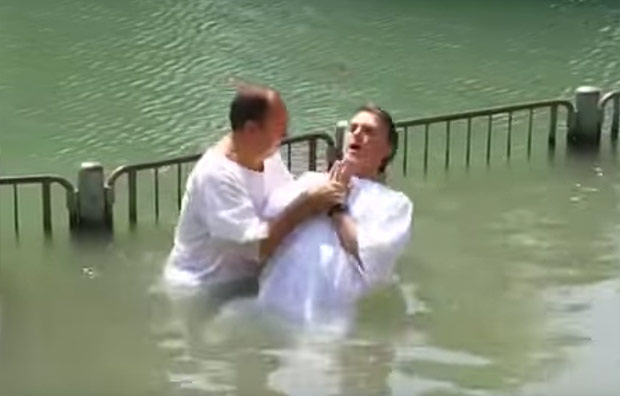