Dilma Rousseff won in the closest and most turbulent Presidential Election since 1989 because the people get to vote, not the markets. The majority of these are people whose quality of life has improved over the last 12 years and who simply trust the party which delivered that improvement to continue their work – no mystery in that, but the story of this election contained some unique elements.

As the figures above demonstrate, while PT lost only around 800k of their 2010 vote, PSDB look to have benefitted significantly both from the drop in abstentions, blank/null votes, and very possibly first time voters. Although voting is obligatory in Brasil, voters do have the option of entering blank, null votes at the voting machine, or to officially abstain.

Media language of ‘razor thin’ margins, and ‘country divided’, as if unique, are wide of the mark, when the voter balance is comparable to that of the United States and many other countries.

During the campaign, sluggish economic performance was somewhat overstated, fear emerged of impending crisis, and the Economist & Wall Street Journal had consistently attacked Rousseff for two years. Thus the subsequent results of speculation on Brasil’s stocks and currency did not themselves reflect anything but noise, inherited assumptions about coming policy.

One of the biggest falsehoods during the campaign was that Brasil “won nothing” from the commodities boom under former PT President Lula. During this period Brasil went from IMF debtor to world bank creditor with over $375bn USD in foreign reserves. Its economic reality changed entirely.

That is not to say that Rousseff’s direction of the economy has been faultless. Early in her first mandate Brasil’s traditionally high interest rates were forced down in an attempt to stoke investment. But Brasil was still gathering it’s strength after the 2008 global financial crisis and sitting on a hangover of artificial stimulus that exploded GDP growth to 7.5% on 2010. Rousseff made a calculated gamble that Brasil could use the coming slump to make an interest rate correction with the expectation of lower inflationary pressure from dropping demand. Interest rate drops would then allow businesses to carry lower cost and invest in vitally needed productivity boosting. But it didn’t work out like that, Brasil’s stubbornly low unemployment kept demand for goods and services high and instead of stoking investment Rousseff stoked inflation.

Although 2010’s freak growth was used to trumpet PT’s economic success, it became an albatross with which Rousseff’s own record was attacked. Yet nobody is in any disagreement that Dilma does need a more accomplished new finance minister, and few tears will be shed at the imminent exit of Guido Mantega.

Rousseff, beyond the traditionally hostile media landscape in Brasil, had an unprecedented set of new challenges to contend with during her first mandate. The mass protests of June 2013, which she tried to turn to her advantage using public demands for health & education, and a frightened political establishment, to vote through a proposal for royalties from pre-sal oil to fund massive increases in budgets for these departments. She also tried, but was prevented by Congress, to force through a plebiscite for political reform, another principal demand of protesters, and one which remains a possibility. Many of the far left PSOL & PSTU, involved in organising some of the original protests, eventually came to support Dilma Rousseff at the ballots when faced with the alternative.

Around the same time, after Edward Snowden’s NSA revelations broke, revealing Brasil to be not just a bystander, but a principal target of US surveillance, Rousseff defiantly addressed the UN General Assembly. At other times she has referred to a concerted international mediatic and geo-political campaign against Brasil, and her government.

An explosion of social media memes, many originating in the US, and attacking the country’s international image & reputation, were shared enthusiastically by opposition supporters in hope of swinging the election rightward, with once enthusiastically-received mega events, the FIFA World Cup and Olympics becoming weaponised, and foreign NGOs such as Greenpeace & Amnesty active in the organisation of further demonstrations.

Perceived clamour for a change, any change, to refresh government & institutions was certainly stronger than 2010 or 2006, but at the end it remained predominantly amongst those who had never supported PT candidates. Yet some high profile figures such as musician and former culture minister under Lula, Gilberto Gil, and his long time collaborator Caetano Veloso, came out initially in support of PSB candidate Marina Silva in the first round, and this reflected a popular, if not majority, mood that some kind of change would be healthy for democracy. They and many others returned to supporting Dilma in the second round.

Observers outside might wonder how such a seemingly unpopular leader could be re-elected, and this would be based on a couple of misconceptions; namely that the mass protests were directed at her or her government, when in actual fact they began against the poor provision of state services, were amplified tenfold following brutality by state Military Police and gradually evolved into general disquiet with the political system. Only later, and internationally, were these protests seen as “Anti-Dilma”. Prior to the June 2013 protests her approval stood at 79%, and she was considered on course for a relatively easy re-election.

Often concerns about state government responsibilities such as public security, and currently the water supply, are projected onto the President by opposition, and this election was no different.

Change did occur however at State level in many parts of the country, and in Congress which is now considered the most conservative since the Dictatorship era, dominated by Ruralists with a significant religious element.

Not the kind of change that most of those on the streets in June 2013 wanted.

Following the death of Eduardo Campos, and even prior, international press, informed both by the lens of Brasil’s connected English-speaking elite and often their own self-interest, hyped the candidature of Marina Silva until Rousseff went ahead, followed by a return to stories that reduced Brazilian democracy to gimmicks.

Marina’s camp described the late surge towards Dilma, masking her own definite fall, as “marketeers stealing your vote” and referred almost constantly to the “lies” of her opposition. Yet, the growing distrust of Silva’s widespread foreign endorsement reached a crescendo when her twitter account, in an English exchange with Hollywood actor Mark Ruffalo appeared to misrepresent her position on marriage equality, and as a result, he withdrew his support. The bigger question was why her campaign, for the presidency of 200 million, was soliciting the support of foreign celebrities in the first place.

Sanctified by the world media, she ended up, in effect, a stalking horse – splitting some of the centre-left vote off to the third-way where it was comfortable, without the negative baggage of PSDB, only to fall behind Neves in the first round, despite there having even been talk of him withdrawing.

But her eventual shift to overtly support PSDB/Neves ended any credibility for the new politics she claimed to represent, and left plans for her own Rede Sustentabilidade party in some disarray.

Aécio Neves lost because he failed to present a platform of specific policies with a clear vision for change. What could have been an easy win with a clear set of focussed & priced policies for improving Brasil’s public services ended up looking more like someone waiting in line. Rousseff had already indicated they will take the steps necessary to restore the tripod of growth – fiscal responsibility laws, inflation targeting and a floating currency – after strategic mistakes made in 2011, and PSDB simply did not convince that they would do better with the economy. Voters were faced with a choice of a party they were tired of, and one they didn’t trust, and many didn’t want to risk progress, for example in education, social programmes, and commitments to civil rights, over an admitted economic misjudgement.

Corruption is an issue but most understand that the problem is systemic and not party-political. The Mensalão scandal began under PSDB, so beating the drum of anti-corruption does not have a tremendous impact on a skeptical electorate.

Their support will remain regardless but many will not be comfortable with any shift to left that they still need to make if they are ever to return power. Neves failed to bridge the gap between the need to continue with reducing inequality and appealing to Brazil’s right that are horrified by recent social changes.

In the words of one observer: “PSDB is less party, more a group of politicians who want to be President.”

It is wrong to dismiss this election as simply a divide between rich and poor, but that divide does exist, as does a significant one between Brasil’s North East & South East, but neither of these things explain the result. However, as has happened elsewhere, there is apparent danger of descent towards such an impasse that the losing side do not accept democratic results.

There is an outright distrust, a hatred of the workers party by a minority of Brazilians. This minority dismiss social programmes such as Bolsa Familia and Minha Casa Minha Vida, as means of autocratic control, as if the poorer segments of society voting in their own interests is unfair. This extends to an unpleasant anti-democratic prejudice towards voters from the poorer North East. Meanwhile PT are incessantly portrayed as the party of corruption despite being demonstrably less so than their main competitors, all of this occurring in a parallel universe where they want to turn Brazil into “another Cuba or Venezuela”. But many PSDB voters were simply fed up with slow progress reforming Brasil’s institutions and public services and were comfortable enough with democracy to vote for a change of government.

Many Brazilians are also uncomfortable with the institutionalisation of the pork barrel PMDB as the continual kingmaker in Brazilian elections. Much of the blame for this is to be laid at the PT’s door as initially in 2002 the PT planned to form a government without the PMDB but changed their mind to strengthen their policy platform, the rest is history. Unfortunately Brasil’s medias’ severe bias against the PT creates an environment where the party are constantly campaigning. If Brasil’s media want a serious debate about policy and the country’s future they need to stop framing the PT as a kind of fifth column and start treating them like a political party with policies they disagree with.

The only way Brazil could ever even remotely resemble Venezuela, however unlikely, is through this polarisation and hostility diminishing faith in democratic process, and this is why a country of such size and diversity requires pragmatists like Rousseff to prevent that happening.

Veja magazine’s blatant attempt to swing the election by publishing unsubstantiated allegations as their cover story 48 hours before the election was subject to censure from the electoral court, and they will likely face further repercussions – while a rumour spread via whatsapp & social media on election day itself, that PT were responsible for the murder and cover up of Petrobras witness Youssef, was by far the low point of an election which dismayed as much as it thrilled.

Brasil deserves a better opposition, one that can challenge constructively, one that doesn’t need to rely on hysteria about the phantom threat of communism in order to rally support. In this lies a significant danger and media such as Veja & Globo have a duty to the country to halt their promotion of these divisions.

If this election has demonstrated anything it is that while Brasil is a healthy, noisy democracy, it remains a young and developing one. 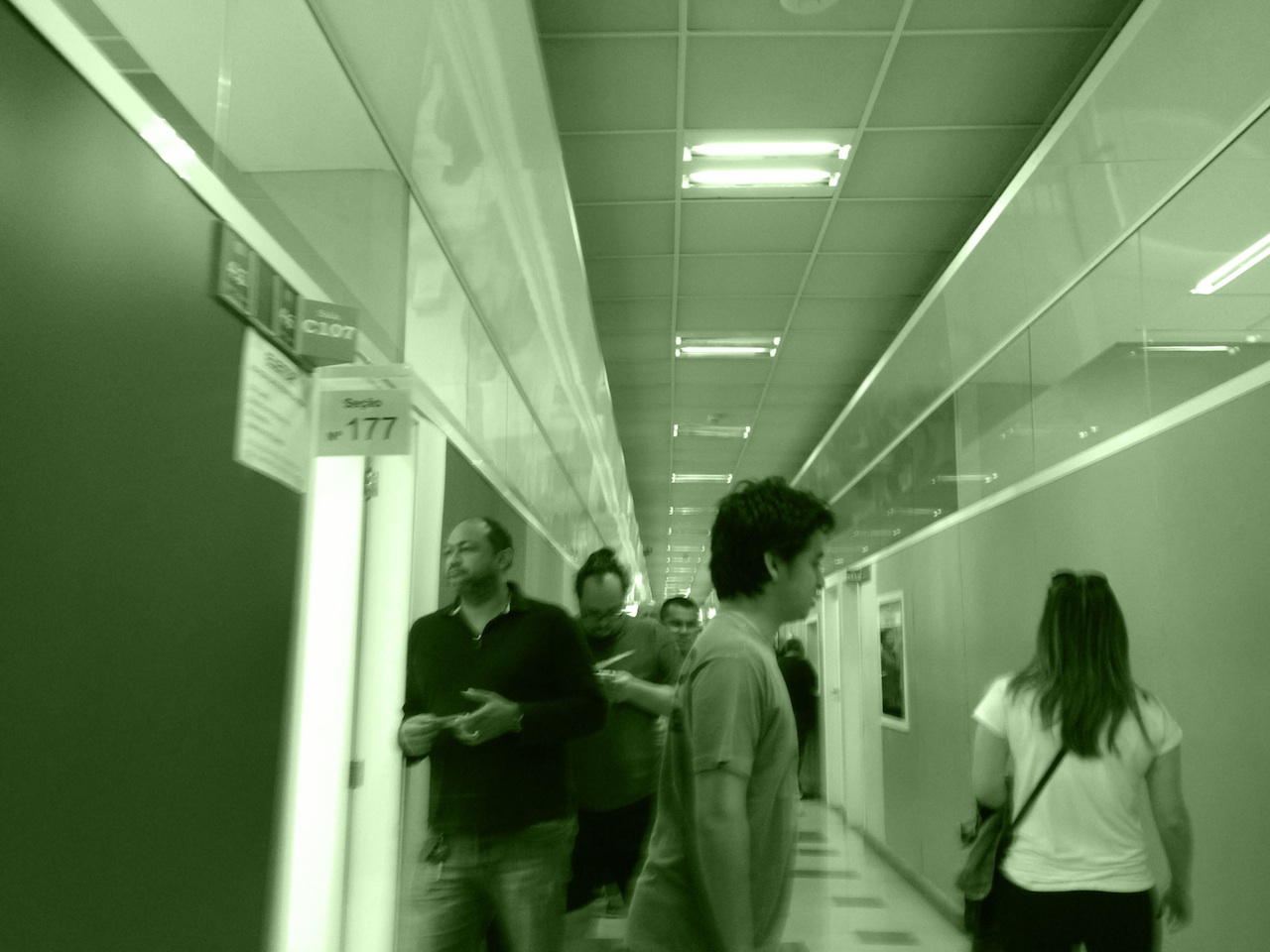