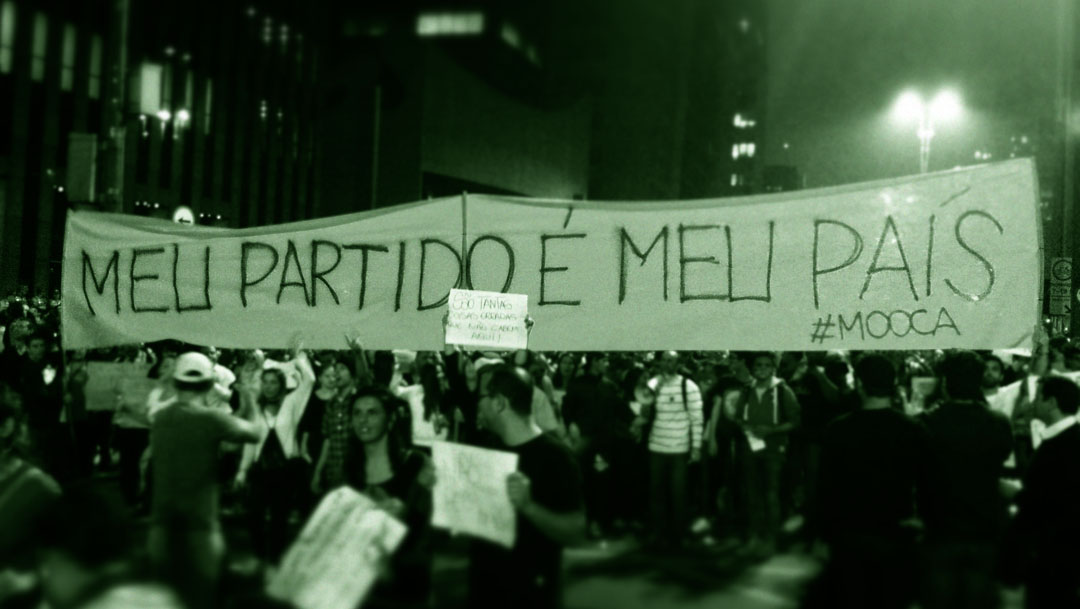 A curious phenomenon is occurring in Brasil. Since June last year, a considerable number of protesters who have taken to the streets against the World Cup, the government, Cuban doctors, the price of the subway / bus or to support anti-corruption protests, are not leftist students or even troublemakers; these are people who belong to the economic, social and cultural elite of the country.

Many are reportedly from the political right and go to the streets in a revolt of the privileged, because they feel threatened by social and distributive policies of Lula and Dilma, are bothered by the presence in the airports of “bus station people” – as epitomized one lady in the queue at Guarulhos.

These citizens often extremely prejudiced, and chant anti-communist slogans as if we were still in midst of the the Cold War. They manifest hatred and anger toward the ex-president Lula and “petralhas”, a term coined by one of their ideologues in the press.

The PT express all that they abhor – the social promiscuity of “Class C or D”, their rise into spaces of mass consumption and the risk that their representation in policy or social movements will become even more hegemonic for the balance of power. To them, they ascribe the evils of Brasil.

Lula is a “bus station” guy, but became a powerful and charismatic leader, with perhaps the most faithful electorate since Getúlio Vargas. The hatred and contempt that his name arouses in elite sectors is directly proportional to their electoral success and public.

There is an electoral movement at this moment, which is a conservative union of “all against Lula and Dilma.”. After the last defeat of opposition candidates, the persistent PT expansion and the consequent weakening of the opposition parties led DEM and PSDB to the ropes. Today they desperately try to occupy the space that was stolen from them by what they call “populism” and hold in contempt “lulo-petismo”.

One of the main misconceptions is pointing only at PT, when the current government is actually formed by a precarious alliances and a broad arc that goes from the center-right to center-left. PT are substituted for the whole coalition, without presenting an alternative political and economic project, which is not a formula already experienced in the past. The opposition parties also seek new leadership to forge a substitute for Lula and Dilma, as in the case of the neophyte Eduardo Campos and Marina Silva.

The social and political movement which emerged from the so-called “June 2013” and now agitates against hosting the World Cup and other things, was still understood very little by observers and politicians themselves.

What began as a protest of the poor against rising rates of buses and trains, gained political space along the middle class, frightened, in turn, of proletarianization. This is your classical phantom in all periods of social mobility or crisis, which pushes for conservative positions.

What became apparent since then was the failure of political representation and, as many have said, the inability to negotiate solutions by traditional institutional channels, such as Congress or the judiciary.

Systematic violence in recent demonstrations against holding the World Cup and also ticket prices in Rio are not just symptoms of the “urban chaos”, as some try to explain. In part maybe, but not only.

The aggressive expansion of social and political participation is linked, in part, to something I pointed out in a previous article entitled “Fire Alarm”: the difficulty of societies current consumption, in a global crisis, to give voice and effective representation not to the consumer, but to the citizen. A Flip side to this is brutalization and political violence.

The death of a photographer in Rio was a deranged anti-democratic act by those who want to see the circus burn; certain mixed groups, suspected of infiltration by provocateurs, Rio militias and the Police.

The background is this year’s elections, not the World Cup or spending on infrastructure.

There is a paradoxical union between conservative forces and extreme left in this scenario. The boys of PSoL, the PSTU and Black Blocs on the left, victims of that disease diagnosed long ago by famous Russian author, Lenin, inspired – understand – by reading Freud.

The “childhood disease of leftism” is a slur of the right, yet a right which also takes to the streets in a revolt of the privileged, a particular and curious phenomenon of present-day Brasil.

The violence that spreads dangerously and takes increasingly political orders in the country, has many faces. Some are masked and belong to Black Blocs, others are people who decry the violence, but they are complacent to the extent that they characterize the protests and the riots as an inevitable effect of public policy.

Playboys and Black Blocs think that, if united, they will never be defeated.

We’ll see in October, at the polls.

Reinaldo Lobo is a psychoanalyst and journalist.