This week, embattled Brazilian President Dilma Rousseff invited correspondents from large global media organisations, some of which her administration had previously snubbed, to a special press conference to address International Media about the plot to anti-democratically oust her.

This coincided with such a shift in international narrative towards tacit, personal support for Rousseff, and a perception of a Coup in progress, that Vice President/Presidential hopeful Michel Temer was said to be “Furious” about.

Plutocratic Brazilian media, effectively unanimous in support of Rousseff’s ouster, reacted with horror, and went on to cast aspersions on the credibility of foreign correspondents and even Pulitzer Prize winning Glenn Greenwald of the Intercept, who had provided some of the very best clarity in English on Brazil’s situation.

This comes off the back of many years when every negative foreign article on PT or Rousseff was lauded breathlessly by the same Brazilian media which now complained about international depictions of a Coup in progress.

As a result of articles like this, some even suggested that journalists were being “paid by PT” for not supporting impeachment of Dilma Rousseff, in some kind of “Leftist conspiracy”. (Editors: Welcome…)

Following the 2014 Election, and as the move towards some kind of Soft Coup developed, Brasil Wire’s general hypothesis was that western editorial mindsets regarding Brazil had seemed to visibly shift, coinciding with the development of the BRICS project, from generally positive under Lula and the early years of Dilma’s administration, arriving at almost a blanket negative during 2013 which some in Brazil even considered a kind of propaganda campaign. Brazil’s independent, non-aligned foreign policy was also criticised with more intensity, and this of course also coincided with revelations that Brazil was viewed more as enemy than ally by North Atlantic powers.

One of the reasons Brasil Wire was set up (with absolutely no outside support) was so that apparent master narratives could be scrutinised, and the hope was that it could help professional journalists move outside the echo chamber. What became very clear, very early on, is that there would be little or no support for such a project from the media, with some even warning Brasil Wire of “risks” and encouraging it to stay away from Politics.

Giving readers a peek behind the curtain wasn’t very popular. Who knew.

To be very clear, it was never seriously suggested there was some kind of shadowy “Media Conspiracy”. What Brasil Wire and others pointed out was, for example, that The Economist, Reuters and Bloomberg were positionally Anti-PT, and much of foreign media perspective was also then drawn from the headlines and skew of Brazil’s extremely conservative plutocratic media, especially in regard to corruption stories.

This perspective was later echoed elsewhere.

The other key observation was that the physical closeness of correspondents, especially those parachuted in at that time without prior knowledge of the country, could have led to very uniform election coverage. There was also a question mark over outreach from “Pro-Business” Think Tanks and Foundations in the United States to journalists working in Brazil, which can be reasonably expected to impact editorially.

Add all of that together and there’s your narrative. 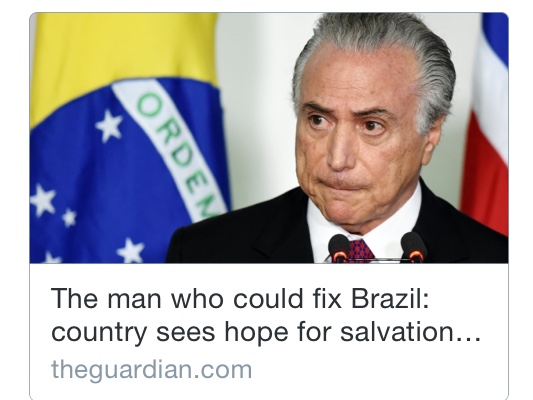 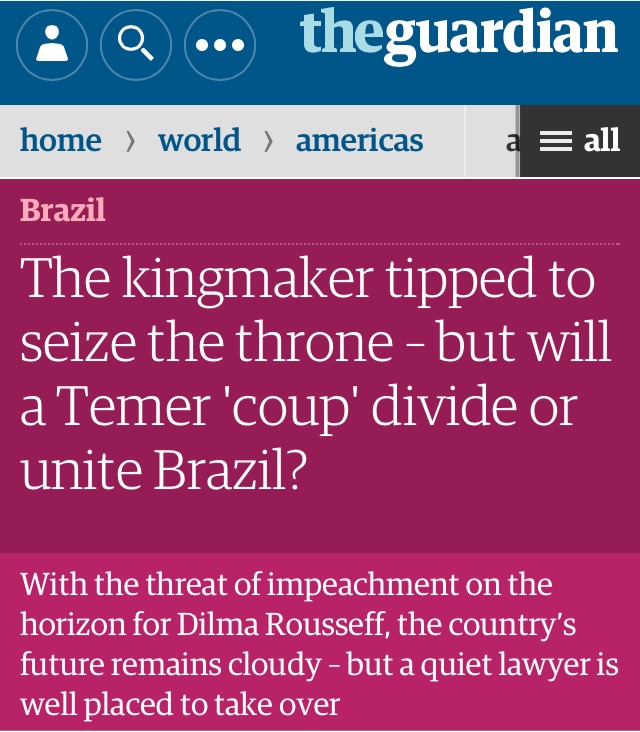 More recently, alterations within a few hours of the publication to a Guardian headline which appeared to promote PMDB’s Michel Temer as the salvation of Brazil to something more Pro-Democracy was one of the strangest incidents of the whole affair. (The two contrasting versions of the same article are pictured above). Reader reaction was predominantly anger, that such a mediocre & universally unpopular (1% of voting intention should he stand for election) Politician was being depicted as some kind of saviour figure – with one Brazilian commenter even asking if the Guardian was “on crack”. With framing so incongruous with the actual text, writer of the piece, Guardian Latin America correspondent Jonathan Watts was rightfully horrified by the original headline and had it changed immediately. Last year, in a Guardian profile on Right-Wing Anti-Dilma protest group MBL, their well documented funding became the proceeds from sales of “T-Shirts and Stickers”. There was no such correction in that instance.

Let us not forget that as recently as a few weeks ago, The (UK) Times has published two or more pieces calling for “Regime Change” in Brazil. Along with The Economist’s predictable demand, The NYT and the Guardian’s sister paper, The Observer also called for Rousseff’s resignation in editorials.

Now, following the shameful scenes in congress during the impeachment vote, and a month of vital & robust reporting by the Intercept, the general sense you get from international mainstream media is that of passive support for Rousseff, albeit often solely from a human interest angle, and for the integrity of Brazil’s democracy – acknowledging a corrupt perversion of democratic process, though for the most part still stopping short of using the word Coup. There are technically correct arguments for and against the use of Coup, even between those who do agree that what is happening is anti-democratic and unjust.

All of this is in the face of uncertainty and terrifying consequences for the country and its people should the situation continue to deteriorate.

Even The Economist (Yes, The Economist) ran with an Anti-Impeachment cover following 3 years of briefing consistently and ideologically against Rousseff & PT, with each successive cover depicting a collapse of Brazil’s economy leading the influential Jornal Nacional on TV Globo.

Welcome to the right side of history, remember to close that stable door.