In September Bloomberg covered a Brazilian elite NYC fundraising gala which it sponsored along with Goldman Sachs, BrazilFoundation (linked to BlackRock Inc) and KAR Properties, a developer who specialises in selling Miami condominiums to wealthy Brazilian ex-pats. In it, the reporter wrote “While the sensitivity of the issue prevented anybody from speaking a word publicly about Brazilian President Dilma Rousseff– whose approval rating of 8 percent is now below the rate of inflation…earlier this week, Brazil’s opposition leaders for the first time formally discussed the procedures to impeach Rousseff amid growing discontent over her handling of a tanking economy.”

This is very typical coverage of Brasil’s political crisis abroad, even if there is no direct call for Rousseff’s impeachment there is a very narrow band of opinion presented.

Recent visitor to the country Noam Chomsky would recognise this as a fundamental concept of his propaganda model theory of control in democratic society. Mainstream corporate media act as agenda setters keeping the debate within a very narrow set of parameters. Liberal newspapers like the Guardian and New York Times are complicit by setting the goal posts of what is “acceptable” leftism, the promotion of a “non-Marxist left”, which more often than not focuses entirely on identity politics and environmental issues leaving serious debate about the nature of how we organise our economic system on the fringe.

As likely 2018 Presidential candidate Ciro Gomes put it “In a Democracy, unpopularity is not an impeachable offence”.

Besides desire for impeachment, Brazilian opinion is practically invisible in English, with the sitting government rarely quoted directly on anything. Conversely there is no shortage of spin regarding Brasil originating from Washington Think Tanks & NGOs. This Guardian Comment is Free article was a rare example of a Brazilian non-partisan voice being audible in an English language publication.

A chorus of inevitability

Brasil’s first female President has undergone a slow-motion demonisation in Anglophone media since, or even prior to her 2010 election, one which intensified in 2013 dovetailing with misrepresentation of the June protests. The briefing against her is largely rooted in ideology and interests of the elite classes both at home and abroad – evidenced in that any available political prop was being deployed to attack Rousseff long prior to the current economic downturn (Note: in Portuguese & Spanish the word ‘crise’ in economic terms means recession, not crash or meltdown). Similarly, failures of State or Municipal services, such as policing, health and education, are routinely attributed to the government of Rousseff in Brasilia. This also carries through geographically, as Brasil Wire’s Brian Mier discussed in his critique of the media’s habit of using Rio de Janeiro as a stand in for Brazilian society at large.

Association with Corruption – more often than not without reference to there being no actual evidence of wrongdoing or personal enrichment on Rousseff’s part – characterises much coverage of her. Not even her high-profile opponents accuse her of being personally corrupt. The often laughable selective indignation found in Brasil’s press regarding corruption scandals translates directly into foreign media.

Unfortunately though, for the enthusiasts, impeachment just isn’t that simple, it is in the view of legal experts actually near impossible. (That this above article was published almost immediately following her re-election one year ago is telling in itself).

Instead, forcing her resignation by creating the climate of inevitability, the perception of an untenable position, pitted against a united opposition and record low popularity, is a more realistic objective. And this is where the media come in, and not just within Brasil – the truncated version presented to the English speaking world would mean that few in the mainstream would bat an eyelid now should she resign, let alone entertain the idea that what has transpired since (and arguably prior to) the 2014 elections has been part of what amounts to an attempted opposition coup d’etat resulting from their defeat.

Bloomberg continually made impeachment look likely if not certain, despite all developments & reports to the contrary. Meanwhile the “Pro” version of Bloomberg suggested that markets were overreacting to Brasil’s recession, another piece suggested now was the best time to invest in a generation. And there’s the kicker, the only way is up for investments made in this climate.

She describes her experience of resistance under the U.S. backed dictatorship during that period as “typical of her generation”, she was after-all a young woman fighting against a neo-fascist authoritarian regime. Yet thanks to McCarthyism and its legacy “Marxist” is effectively a pejorative term in the United States and elsewhere.

This response expressing concern about her past is slightly comic when it is, after all, the prefix for almost every single mention of her name. 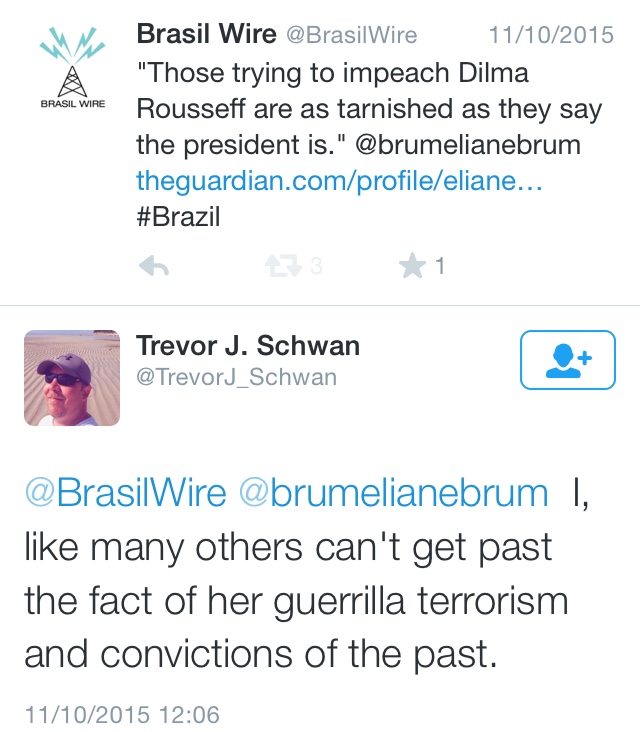 And Bloomberg go one further: an opinion piece ultimately dismissing her chances of survival is headlined “Brazil’s Ex-Guerrilla-in-Chief Isn’t Going Down Without a Fight“. The virtue of her resistance, the experience of capture and torture, are in effect turned on their head, as if resulting in some kind of psychological flaw preventing her from stepping aside quietly.

“Dilma spends more on fancy goods than the Queen of England.” claimed one recent piece, laying on subtext with a trowel. Evidently the Head of State of one of the largest and most important countries in the world is supposed to wear a hair-shirt and travel coach. Even the most cursory look into Rousseff’s personal life before and during her time in office shows nothing to indicate she is any kind of Imelda Marcos figure some try to portray. Frequent attacks of a misogynistic nature against her have been completely whitewashed by a foreign press that would normally be expected to take issue with them.

Many foreign reporters have seemed for some time rather giddy with the prospect of Rousseff’s anti-democratic ouster. This can be explained as opinion or professional interest but likely also reflects editorial imperatives and edicts.

Despite the significant part played by establishment media such as Globo in orchestration of the March, April & August anti-government protests, and clear statistics showing that the vast majority of demonstrators were supporters of defeated candidate Aécio Neves – rather than a unified show of dissatisfaction – reporters appeared to seek instead any “former supporter” of Rousseff and focus on their story as if to prove that the president had lost her mandate, whilst opinion polls shorn of context were tossed around to triangulate.

Earlier, reporters were dispatched to Rousseff’s mythic “base”, the poorer North East of the country, specifically to find examples of disgruntled former supporters. The conclusions in these reports were then cited as fact elsewhere.

Similar material appeared in other outlets but again, leading the way was Bloomberg. The self-evident incentive to paymasters in international capital of a rightward shift in Brasil’s governance, social & economic policy was present across financial media.

In Bloomberg’s case their business model means they are also one of the few outlets that can still afford to pay writers in a collapsing industry.

Elsewhere Washington Post-owned Foreign Policy published this report, which attempted to underline a fait-accompli surrounding Rousseff’s demise. (this earlier piece, and these two articles from FP which greeted her election in 2010 already expressed earlier but similar sentiments). During the first phase of the 2014 election, one commentator opined that “Dilma should just let the opposition take this one”.

Most shockingly of all, the Times (UK) financial section ran with “How to back Brazilian Regime Change“. 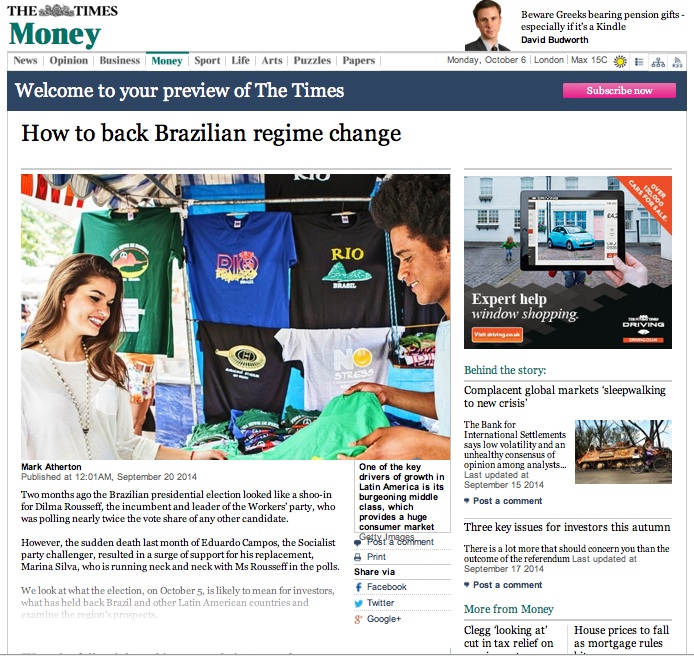 Crucially, as detailed here, the documented foreign financing of pro-impeachment groups has been completely ignored – which is a pathetic indictment of the state of mainstream foreign media in Brasil, where the decaying facade of political impartiality is being washed away by full-blown economic propaganda.

Whilst impeachment efforts became formalised, a slow decline in overt media enthusiasm for Rousseff’s ouster also coincided with the patchwork coalition over which she presides shifting towards neoliberal orthodoxy and austerity with the appointment of ‘Chicago boy’ Joaquim Levy as Finance Minister and promotion of the Agenda Brasil policy package. This perceived ideological retreat has succeeded in dividing and weakening PT’s support on the left, the repercussions of which are expected to resonate for some time.

They got what they wanted, who cares who is President?