“Latin America” is not a country. It is a vast region of the Earth with parallel indigenous & colonial histories, independence struggles, mostly common language, but with very distinct national identities, often lost on outsiders.

Through language and some peculiar historical twists of fate, Brasil is yet more distinct still. It is an enormous, continent-sized federation of 26 states and a patchwork of cultures & realities.

As Brasil-based Mexican writer Juan Pablo Villalobos put it: “São Paulo and Manaus are as similar as Wales and China. Comparing Rio de Janeiro and Palmas is like comparing a shoe with a rocket. Porto Alegre and Rio Branco like a frog to a cup of coffee. Belo Horizonte and Salvador like a human hair to a constellation. The sum of these differences is called Brasil.”

Interaction between Brasil and its neighbours is more difficult than outsiders would anticipate when gazing at a map of the continent.

So when networks such as CNN, MSNBC or Fox call on what they classify as “Hispanic” or “Latino” pundits to comment on Brasil, audiences encounter what we may now call ‘The Pajero Paradox’.

Launched in 2006, the Fourth Generation Mitsubishi Pajero is one of the most popular Sports Utility Vehicles in Brasil, and they are frequently seen in and around the bairros nobres of São Paulo, Rio de Janeiro and elsewhere, arriving on the market at just the right time to take advantage of a booming Brazilian economy.

The 4G Pajero brought new interior and exterior styling which were accompanied by enhanced safety features, such as dual-stage SRS front airbags as well as new side-impact and curtain airbags. The Super-Select 4WD II system was retained, complemented by an improved Active Stability & Traction Control system and electronic brakeforce distribution. With skid plates, heavy weight components and 8.7 inches of ground clearance the vehicle retains its reputation as one of the toughest and most capable 4x4s. The engines were upgraded with the 3.2 L diesel gaining Common Rail technology, a DPF for cleaner emissions and producing 125 kW (167 hp/170 PS) and the 3.8 L V6 gaining MIVEC variable valve timing to boost power to 184 kW (247 hp/250 PS). Both engines meet new Euro IV emissions standards.

Yet head out on a road trip, cross the border into Argentina, and instantaneously you’re driving a vehicle called “Masturbator”. ‘The Pajero Paradox’.

Mitsubishi were forced to change the name of the car elsewhere, and it is known as the Mitsubishi Montero (meaning “Mountain hunter) in Spain, and the rest of the Americas.

Reuters advertised for a new Brasil Bureau Chief recently, with the job description hinting at a default anti-left position and specifying that an understanding of Portuguese is not essential if the candidate speaks Spanish. 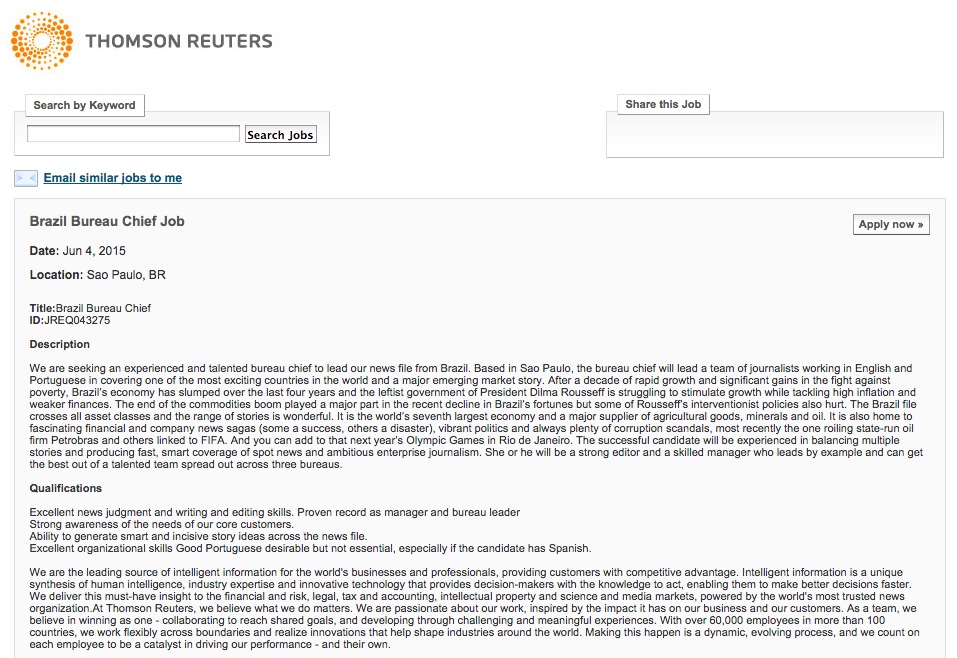 It seems odd that one of the World’s most important news organisations does not consider grasp of the host nation’s language an important attribute.

This kind of catch-all “South of the Border” mentality is one of the reasons South America is so poorly covered by Northern media in general, with continual efforts to shoehorn a Neoliberal, Cold-War Anti-Left, Anti-Chavismo, Anti-Castro agenda into any political story in the region. Disregarding local nuance and unique circumstances in a country as complicated as Brasil is fatal.

We wouldn’t expect an Italian to be paraded on TV Networks as if expert on Swedish political or economic affairs, but it is not uncommon to find someone from a distant and unrelated American nation explaining  “Former-Marxist Guerilla Dilma Rousseff” to Anglophone audiences.

Luck of the Irish

Argentine born, and U.S. resident since 1976, Andres Oppenheimer is one of the leading Latin America media pundits in the United States, with his Miami Herald column syndicated to more than 60 newspapers. He won a Pulitzer in 1987 as a member of The Miami Herald team that uncovered the Iran-Contra scandal.

However, in 2007 Oppenheimer published ‘Saving the Americas: The dangerous decline of Latin America and what the U.S. must do‘

In the book, released shortly before the Global Financial Crisis, he compares unfavourably a Latin America “blinkered by ideology and obsessed with the past” with the “success stories” of globalization & urges that his native Argentina, Brasil and their continental neighbours follow the example of countries such as Ireland.

While Ireland and other “success stories” crashed and burned, Brasil was amongst the last nations to enter and first to exit recession during the crisis, with record growth in the years that followed, poverty reduced from 43 to 20%, literacy rates raised, and hunger eliminated.