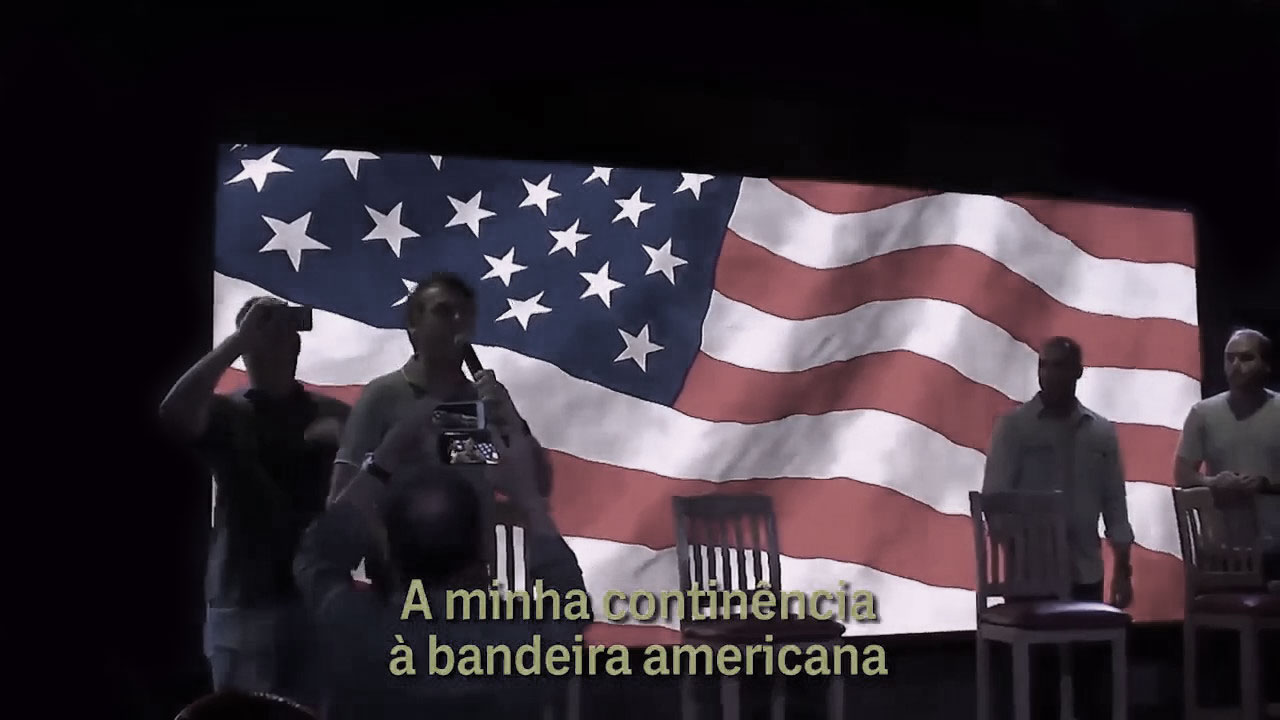 “Our Bastard”: Bolsonaro At The White House

On March 19 2019, extreme-right President of Brazil, Jair Bolsonaro will meet President Donald Trump in Washington DC, on official invitation to the White House. Whilst Trump sidemen John Bolton, Mike Pompeio, Mark Rubio, and rehabilitated war criminal Elliot Abrams, manipulate, confect and pontificate about the situation in Venezuela, they will entertain a man who has openly stated that he does not believe in the concept of human rights at all.

The official White House statement reads: “President Donald J. Trump will welcome President Jair Bolsonaro of Brazil to the White House on Tuesday, March 19, 2019.  President Trump and President Bolsonaro will discuss how to build a more prosperous, secure, and democratic Western Hemisphere.  The leaders of the Hemisphere’s two largest economies will also discuss opportunities for defense cooperation, pro-growth trade policies, combatting transnational crime, and restoring democracy in Venezuela.  Finally, they will talk about the major role that the United States and Brazil are playing in the effort to provide humanitarian assistance to Venezuela.”

For a Brazilian President, Bolsonaro is remarkable in the extent to which he combines a spurious, asinine form of nationalism, with an absolute economic, diplomatic and strategic subservience to the United States. He also heads the most incompetent and out of depth government Brazil has seen since direct elections returned in 1989.

“He may be a bastard, but he’s our bastard.” is a quote attributed to various U.S. Presidents and officials for nearly a century, and used to describe an array of dictators and unpleasant political figures in Latin America and elsewhere. It’s easy to imagine these words uttered about Jair Bolsonaro in the corridors of U.S. power today, as they were when Nixon took tea with the monstrous Emilio Medici in December 1971. Then it was Allende’s Chile on the agenda, now it is Venezuela. Bolsonaro is unhappy with his international image, and will surely hope that this high profile visit will improve it. The proven racist and open admirer of genocidal dictators is reportedly perplexed that he is seen as a “racist dictator” outside Brazil.

He and his family are now embroiled in a scandal far deeper and darker than anything in modern Brazilian political history. The Bolsonaros are linked to Rio de Janeiro Militias, gangs of former Military Police involved in extortion, money laundering and murder on an industrial scale. Most pertinent is their proximity to the assassination of Rio City Congresswoman Marielle Franco, as detailed in this article published on the one year anniversary of her killing.

How ironic, with a low-level mafia family actually now occupying power, to remember that the centre-left Workers Party (PT) Governments of Lula da Silva and Dilma Rousseff had been depicted as if “criminal organisations” by a rabid oligarchic media, during a decade long campaign of defamation which much of the U.S. media enthusiastically endorsed. The most solid period of inclusive growth and development in Brazil’s history, with the country emerging as a genuine global actor, is now a distant memory.

That the U.S. was hostile to that Brazil but friendly to the moribund present day version is telling in itself, and goes far beyond partisan lines or ideology. Back in 2013, the country’s first female President Dilma Rousseff cancelled a scheduled state visit to the United States following revelations of mass spying on her, her government and Brazilian industry by the U.S. National Security Agency, and FVEY allies such as the U.K. and Canada, exposed in documents passed by Edward Snowden to journalists Glenn Greenwald and Laura Poitras.

A hitherto unpublished document in this caché revealed that at some point before April 2013, when Snowden made his getaway, Brazil was already featured in President Obama’s daily National Security briefing, which he would read in the oval office on a specially designed tablet device in the company of his advisors. In the document, Brazil, an ostensible US ally, appeared alongside trouble spots such as Ukraine, Iran, and Venezuela. This was months at least before the outbreak of instability in Brazil which followed the Snowden revelations in early June 2013.

We must ask what the reasons were for Brazil’s inclusion. (We also request that the document itself is made available to the Brazilian public).

As a result of the spying scandal, a furious Rousseff cancelled her visit to the United States, and sought advice as to how Brazil could protect itself. In her U.N. General Assembly address that September, Rousseff lamented her country’s treatment and invoked an imperial past, of U.S. support for Neofascist dictatorships in Latin America, like the one she herself was imprisoned and tortured whilst resisting.

It was then that Rousseff’s Government also decided to reject Boeing in the re-equipment of the Brazilian Airforce, opting instead for a deal with Sweden’s SAAB which offered full technology transfer, and would turn the country into a manufacturer and exporter of Gripen NG Fighter Jets, through its aerospace conglomerate Embraer.

Dilma’s visit to the U.S. eventually came in June 2015, with her ouster already in motion, where she sat opposite grinning ambassador Liliana Ayalde, who, once the coup was concluded, would take over as a civilian commander of U.S. Southern Command, overseeing the expansion of military presence across the continent. Just under 4 years later, Embraer has been all but sold to Boeing, and a US-backed Neofascist occupies the Brazilian Presidency, a man who brazenly eulogises the very Dictatorial regimes that Rousseff had lamented to the UNGA.

Jair Bolsonaro’s invitation to the White House makes a mockery of U.S. foreign policy rhetoric, especially in Latin America, and only an idiot would fall for it. From the use of its armed forces and/or territory for a military attack on Venezuela, to the lease of the Alcantâra rocket launching base to the United States – the first base on Brazilian soil since the second world war – the Bolsonaro Government and Military Junta behind it are now the principal US ally in South America along with Colombia. Just five years ago Brazil had a sovereign foreign policy, and was central to the advancement of the BRICS project with India, China, Russia and South Africa which envisaged a multipolar world that the United States saw as a threat to its hegemony.

While in Washington D.C. a dinner is to be held in Bolsonaro’s honour. Folha do São Paulo writes: “Philosophers, journalists and investors, all aligned with conservatism, were invited for the welcome dinner and are expected to influence Bolsonaro’s decisions during his visit to U.S. president Donald Trump. The VIP guest list proposed by Foreign Minister Ernesto Araújo and diplomat Nestor Forsters includes Gerald Brant, one of Bolsonaro’s first supporters among American investors and entrepreneurs and Mary Anastasia O’Grady, member of the Wall Street Journal editorial board. Writer Olavo de Carvalho and former Trump strategist Steve Bannon, both longtime Bolsonaro supporters, are also confirmed.”

That the WSJ’s O’Grady will be present is no surprise, given that her magazine explicitly supported his candidacy during the election, representing the seamless alliance of neoliberals in the global north, and client fascists in the south. Wall Street lobbies and NATO think tank the Atlantic Council alike are hopeful he will deliver on their peculiar shared fixation with pension reform – which, if passed, would mean most Brazilians die before retirement. Justice Minister Sérgio Moro, the US-trained Lava Jato judge who ran the prosecution of Lula da Silva which opened the door to Bolsonaro’s Presidency will also accompany him on the trip, as will Paulo Guedes, the Millenium Institute’s “Chicago Boy” Economy Minister.

Also on Bolsonaro’s agenda is a new nuclear accord with the United States which would see Brazil become an importer of technology, having had the godfather of its own civilian atomic programme, Almirante Othon, jailed by the Lava Jato investigation in 2016. The deal will also open up uranium mining in the country to U.S. companies. Brazil is the only country besides the U.S. and Russia to possess both uranium reserves and proprietary technology for enriching it.

Although the optics and methods change, the objectives of empire do not. Would an image conscious Barack Obama have invited Bolsonaro to Washington? Probably not, but his Government, in particular his Department of Justice, did a great deal to help put him there, through its focus on Brazil’s judiciary, its unconstitutional collaboration on the Lava Jato investigation, which helped tank the economy in 2015, thus provide another pretext for Dilma Rousseff’s impeachment and deliver its ultimate prize, the politically motivated imprisonment of former President Lula da Silva, who was poised to win the 2018 election until forced withdrawal. Rousseff called Lula’s imprisonment “phase two” of the judicial coup which removed her in 2016, a perversion of democracy which the Obama administration accepted and endorsed beneath a veneer of public concern, insisting that “Brazil’s institutions are working”. In 2009, new Secretary of State Hillary Rodham Clinton had insisted that “the ballot box is not enough” in Latin America, and establishment Democrats are now 100% behind Trump’s Coup attempt in Venezuela.

Democratic Congresswoman Ilhan Omar recently called Barack Obama “a pretty face who got away with murder”. Stripped of the protection that savvy public relations enabled, he and his Democratic administrations certainly have blood on their hands, and his Republican successor inherited a virtual cakewalk in Brazil and Latin America as a whole. Key is that without Brazil onside with the United States, action against Venezuela would have been impossible.

Beneath the shallow public diplomacy of such visits, differences and constants in the modus operandi of US Governments, in the maintenance of what it sees as its Latin American colonial estate, are laid bare. No more so than now.

The U.S. evidently preferred the Brazil of the 1960s-70s over its 2000s model. Now it has a loyal President who wants to take Brazil back there.