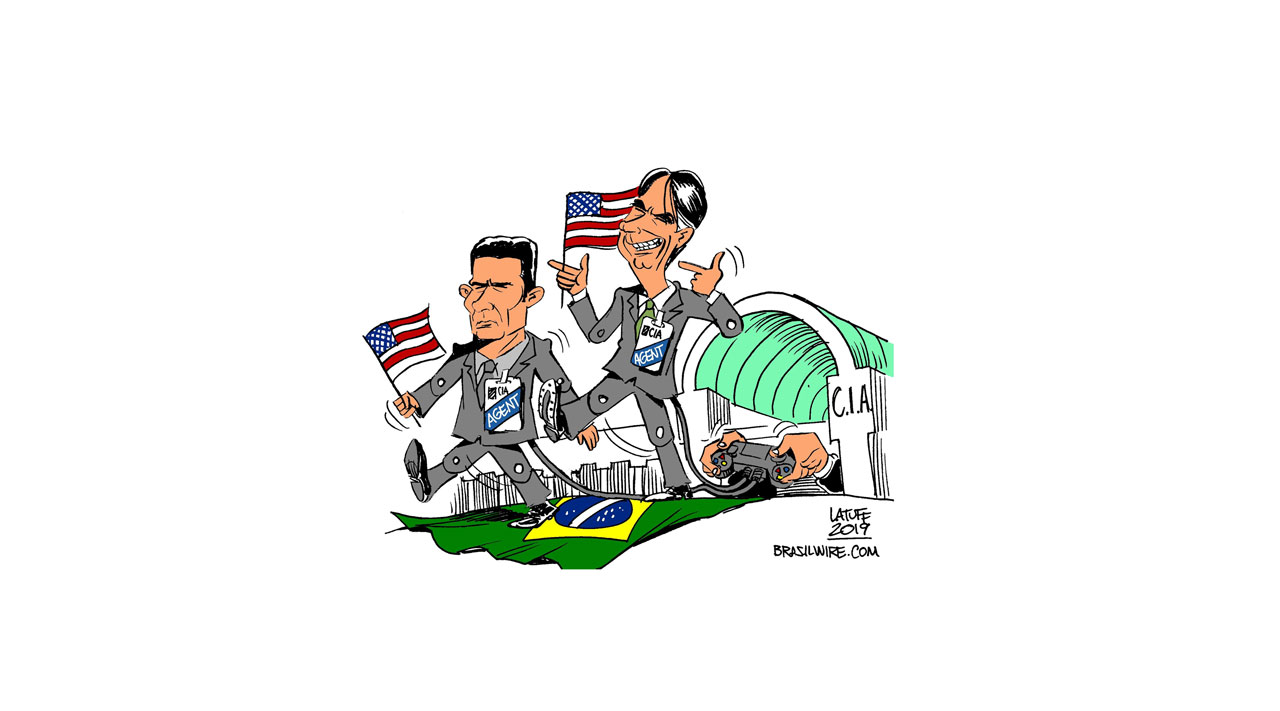 On March 18, Brazil’s extreme-right President Jair Bolsonaro made history. Outside the official agenda of his first official trip to the United States he paid a visit to CIA Headquarters, becoming the first ever Brazilian President to do so. In contrast, Bolsonaro has never visited ABIN, Brazil’s moribund equivalent of the CIA.

On the agenda, it is assumed, were the ongoing coup attempt in Venezuela, in which the United States wants further Brazilian assistance, unrest in Nicaragua, Cuba, and Bolivia’s coming election. More pertinent is what role, if any, the CIA had in Bolsonaro’s own.

“No Brazilian president had ever paid a visit to the CIA, This is an explicitly submissive position. Nothing compares to this.” remarked former Foreign Minister Celso Amorim, one of the world’s most respected diplomats.

In June 2013, the scandal broke that Brazil, President Rousseff, several of her ministries and Oil Giant Petrobras, were all under surveillance by the National Security Agency. Brazil was supposed to be a U.S. ally, and as a result Rousseff cancelled her scheduled official visit to the United States.

At this time, Jair Bolsonaro, then a fringe extremist congressman with no realistic presidential chances, dismissed the fully documented revelations of U.S. mass spying on Brazil as a distraction, even suggesting that Dilma was concocting the scandal to distract from her own domestic problems.

During the Snowden reporting, I was repeatedly told/warned that CIA’s largest permanent presence is in Brazil (due to Cold War roots when CIA helped overthrow Brazil’s democratically elected government & then propped up the resulting military regime). It’s worse now: https://t.co/8TTnthrEeL

In 2016, immediately following the soft coup which removed Dilma Rousseff, Bolsonaro ally and one of Brazil’s most powerful men, General Sérgio Westphalen Etchegoyen, who was then Brazil’s newly named head of institutional security met with the CIA’s chief in Brasilía. The secret meeting was accidentally revealed when Etchegoyen’s agenda was published.

Bolsonaro’s CIA visit has not only angered steadfast anti-imperialists, who the country should now look to for answers after years of naivety and complacency over the U.S. role in the country’s descent into political distress – it has even left conservative commentators exasperated.

The new Government was already delivering a wish list of demands, both corporate and strategic, including the lease of the long-prized Alcantâra rocket base to the United States Military, the first such presence on Brazilian soil since the second world war. The U.S. has gained enormously since the coup of 2016, advantages which have only expanded and solidified with the election of Bolsonaro.

The Brazilian President was accompanied to the CIA HQ by Sérgio Moro, the US-trained Inquisitor-Judge turned Justice Minister who was responsible for the politically motivated jailing of Bolsonaro’s main competitor in the 2018 election, Lula da Silva, who was certain to win until his forced removal from the race. With this, Moro delivered the election to Bolsonaro, and was immediately rewarded with a ministerial position. The pair met Gina Haspel, the head of the agency who had been removed in 2013 after revelations of her direct role in torture of kidnapped suspects in the wake of 911. Given that Bolsonaro is an enthusiastic supporter of torture and publicly eulogises torturers of Brazil’s dictatorship era, this cannot have caused him any concern.

Sérgio Moro meanwhile has long been accused of being a CIA agent or simply working in some capacity for the United States, and there has long been evidence, albeit inconclusive, to support this hypothesis. Before taking up his ministerial position, Moro headed Lava Jato (Carwash), the internationally promoted and now discredited anti-corruption operation. In recent weeks the Supreme Court has been locked in a battle over an attempt by the Department of Justice to grant the Lava Jato task force, based in the southern city of Curitiba, R$2.5bn to create a privately managed “Anti-Corruption fund”, with money taken from fines paid by the investigated state controlled oil company Petrobras.

Lava Jato was conducted in collaboration with the FBI and U.S. Department of Justice. Some of that collaboration occurred on an informal basis which was in breach of Brazil’s constitution and was the basis of a motion to annul the case against former president Lula. Acting Attorney General Kenneth Blanco even boasted of the DOJ role in Lula’s prosecution during a speech at the NATO think tank Atlantic Council, whose special Latin America office was set up in 2013. AC has been largely supportive of Bolsonaro’s ascendency, and the actions which enabled it including the impeachment of Brazil’s first female President Dilma Rousseff, which the neofascist used as a springboard for his own presidential ambitions.

Moro’s Lava Jato, which was based on his own 2004 study of Italy’s Mani Pulite (Clean Hands), and whose concept and structure was outlined in a 2009 State Department cable, not only created two false pretexts for one President’s removal (corruption and economy), it prevented the election of another (Lula), and also worked during the 2018 election to attack the reputation of his replacement, Fernando Haddad, who was later cleared of the accusations.

Moro has undoubtedly changed the course of Brazilian history with his decapitation of the centre-left Workers Party (PT), and delivered the Presidency to a Neofascist who has said that 30,000 people needed to be killed for Brazil to function, and threatened political opponents with exile, imprisonment, even machine-gunning during his election campaign.

In this context, President Jair Bolsonaro or his Justice and Security Minister Sérgio Moro having any contact with the CIA is even more bewildering and frightening.

Commentators who have regularly poured professional scorn on any suggestion of U.S. involvement in Brazil are now very quiet. The intellectual gymnastics required to depict Bolsonaro’s CIA visit as normal behaviour is beyond even the usual chorus of Wall Street lobbyists and foreign correspondents. Whilst observers shouldn’t expect actual insight from workaday hacks, it is the journalists and commentators who strongly and consistently refuted any suggestion of a U.S. role who should face scrutiny. They won’t be feeling comfortable today.

The most useful of idiots, who consciously or otherwise are embedded in an asymmetric, unconventional war; Reuters, Bloomberg – in particular those connected to think tanks such as AS/COA and Atlantic Council, will find it very difficult to spin this. These are who boosted the anti Dilma Rousseff narratives of 2013-16, then denied that a coup had taken place, whilst breathlessly promoting Sérgio Moro internationally, pre-judging Lula’s guilt, denying his imprisonment was politically motivated, normalising or even backing Bolsonaro during the 2018 election and behaving as if it was free and fair, business as usual.

There were chiefs at international news agencies in Brazil who threatened staff with dismissal if they used the word “Coup/Golpe” to describe what was happening on their personal social media, and vehemently denied that Sérgio Moro was a CIA agent, without prompting. Then there are the more “woke” types who acknowledge U.S. involvement in Brazil – but only that which occurred 40 years or more ago and which can be safely filed away under the “Cold War”. “I mean, of course we all know that American intervention is restricted to yesteryear” joked one Latin America historian about this kind of discourse.

Brazil needs and deserves an immediate and complete reappraisal from the media on what has and is being done to the country, namely the United States and allies role in it, without artificial distinction between state and corporate power. This needs to be conducted without whitewashing, without censorship by omission. Brazilians deserve honesty and thorough investigation.

We at Brasil Wire have long maintained that in addition to what was already available, which was ample, much more evidence would become available over the coming months and years that would further underline U.S. involvement in Brazil’s complicated and often perplexing slow motion coup.

We did not expect anything quite so brazen and astonishing as the Brazilian President and the Justice Minister who delivered him that Presidency, visiting the CIA, the agency responsible for many of the worst injustices and atrocities the region has suffered in the modern era.