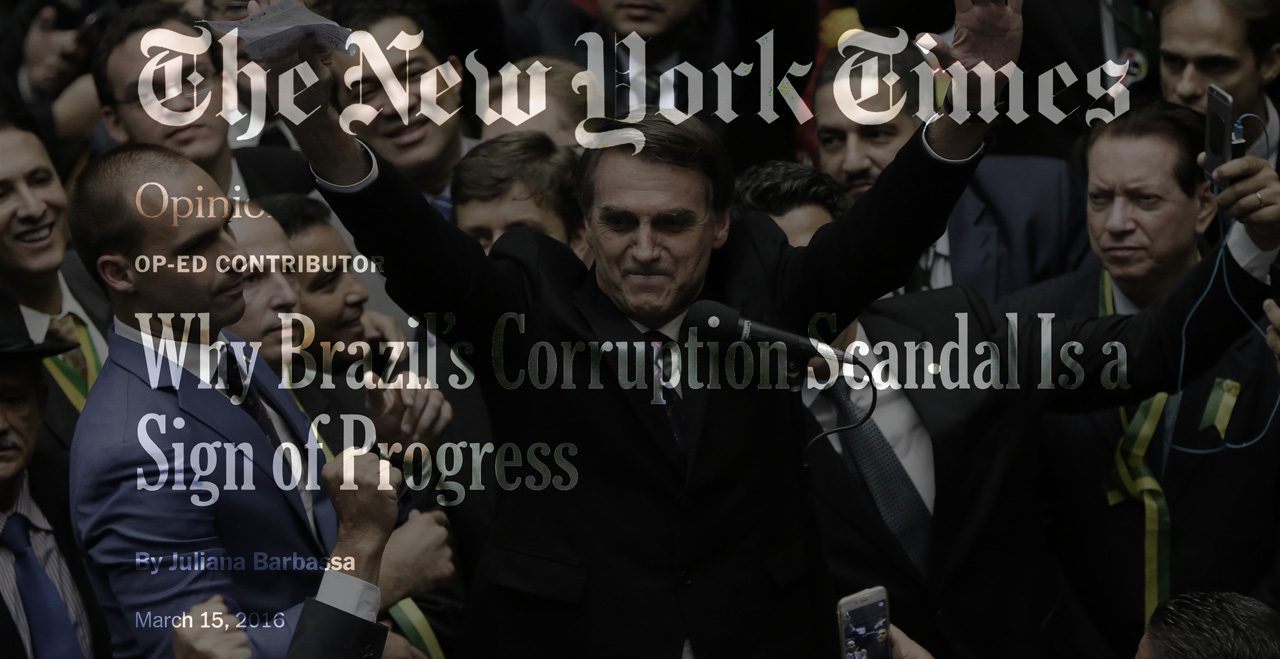 “A Sign Of Progress”: How A Tiny Corporate Media Clique Inverted Reality During Brazil’s 2016 Coup

On the fifth anniversary of Dilma Rousseff’s impeachment, the role foreign media played in propagandising for it still warrants further investigation.

Little of international media coverage of Brazil’s 2016 coup and its centrepiece, the impeachment of President Dilma Rousseff, has dated well. But one opinion piece in US newspaper the New York Times stands out as emblematic of the inverted reality being presented to the world, as Brazil’s first female president was facing a right-wing plot to remove her and her progressive government from office.

Written by Op-Ed contributor, the Associated Press Rio correspondent, Juliana Barbassa, it was headlined “Why Brazil’s Corruption Scandal Is a Sign of Progress”. It was published on March 15, 2016, one month before the first congressional vote to impeach Dilma Rousseff and with the campaign against her at full tilt.

At this point it was already apparent to any serious analyst that something was very wrong. Anti-Coup protests were occurring in equal frequency and numbers to the yellow and green demonstrations for Dilma’s impeachment, yet the article begins: “Hundreds of thousands of Brazilians took to the streets over the weekend to protest their government and to send a message to the country’s political class: No one is untouchable. Brazil’s politicians should take that to heart. The Federal Police temporarily detained Luiz Inácio Lula da Silva, the former president, for questioning earlier this month in connection with a huge — and expanding — graft investigation. President Dilma Rousseff, Mr. da Silva’s handpicked successor, could be next.”

Media consumers who consider themselves engaged with world affairs would have no doubt seen an article like this one in the paper of record, taken it at face value, and have had no idea how wrong it was, nor how incestuous its conception.

They might consult multiple trusted sources and see this inversion of reality corroborated. They wouldn’t know that the most prominent English language reporters were meeting regularly and sharing notes. For example, on the very same day, the Guardian published an editorial calling for Rousseff to resign.

They could look at news agency Reuters, and see something broadly in line with what they had read in the NYT.

They wouldn’t know that Brian Winter, until recently the Reuters Brazil correspondent, now worked indirectly on behalf of Chevron, one of the principal lobbyists for, and beneficiaries of the coup. They wouldn’t know that both Winter and Brazil bureau chief Todd Benson had recently left Reuters following a scandal in which it was seen to have censored information that was considered favourable to Dilma and the Workers Party.

They wouldn’t know that the Reuters correspondent had got the NYT pieces’ author, Juliana Barbassa, a job at oil, agribusiness, banking and mining industry lobby Council of the Americas‘ in-house magazine Americas Quarterly, from where she became the New York Times’ Latin America and Caribbean desk editor.

They wouldn’t know that the author’s husband Chris Gaffney, was a primary source for Dave Zirin’s character assassination of Lula, Dance with the Devil, who, living in a penthouse apartment on Rio’s Botofogo bay, used the World Cup as a platform to attack the PT from a radical left standpoint.

They wouldn’t know that the Brazil bureau chief at Associated Press, Brad Brooks, was personally forbidding staff from use the word Coup/Golpe to describe what was happening in Brazil, regardless of their belief, and even on their private Facebook pages.

They wouldn’t know that a group of young and influential Brazilian reporters, including those from AP, had been taken on all expenses paid trips to the US, for briefings at the State Department, to learn about “sustainable funding models”.

Finally, they might look for opinions from across the political spectrum.

They wouldn’t know that ostensibly leftist voices they may have followed in Brazil were funded by corporate philanthropy from Ford Foundation, Pierre Omidyar and OSF, nor that they were closer professionally and socially to this same group of corporate reporters than they were the actual Brazilian left. This promiscuity can be confirmed by reading hundreds of friendly bar-setting twitter engagements with AS/COA Americas Quarterly editor and Alvaro Uribe / FHC biographer Brian Winter, by journalists such as New Yorker’s Alex Cuadros and LA Times correspondent Vincent Bevins during Dilma’s impeachment, and in the lead up to Lula’s arrest two years later.

This appearance of consensus fed into foreign television, as US comedy writers used the NYT as their principal source. Brian Mier writes: “Even John Oliver made a joke about Dilma Rousseff and Petrobras corruption. It wasn’t based on facts, but helped his liberal US audience feel comfortable about the illegal impeachment of Brazil’s first woman President and subsequent US corporate oil grab.” Daniel Hunt adds “Don’t ever doubt the cumulative effect foreign media coverage can have on the actual political scenario inside a country like Brazil, which is uniquely fixated with how it is covered abroad. All the liberals were sharing this nonsense at the time of Rousseff’s impeachment.”

It was only after the April 2016 congressional vote, from which Jair Bolsonaro launched his 2018 presidential bid that the hand-wringing began, from a cluster of mostly US media professionals who had shown no critical analysis as the campaign against Dilma raged, from her re-election in October 2014, right through to her impeachment.

Maybe a fascist elected as president wasn’t the outcome they imagined, but with no tanks on the street, the 2016 coup was staged in the media, which late Brazilian journalist Paulo Henrique Amorim labeled, The 4th Power. Brazil is living with the deadly consequences now, and every journalist who endorsed, normalized and enabled a subversion of democracy, who went along with the narratives of right-wing regime change, holds a degree of culpability.

Not only did their often brazen propaganda actually influence opinion within Brazil’s media classes, together they created a screen of editorial cover which stunted international solidarity for Rousseff and her centre-left government in their hour of need. This was no unfortunate accident; it was an ethical and journalistic disgrace, with observers as actors.

There is no “They wouldn’t know” on the reporters’ part, and this is not hindsight. Some people were paid to be wrong.