Proof that, as suspected, Sergio Moro and Operation Lava Jato was protecting high profile centre-right politicians such as US-backed former President Fernando Henrique Cardoso, is yet another smoking gun, and more vindication for those who voiced concerns over the anti-corruption operation, its underhand methods, political motives, and US involvement since it began in 2014.

In its latest leak of conversations between Moro and the Lava Jato task force, the Intercept reveals that they pretended to investigate ex-President Fernando Henrique Cardoso, while ignoring evidence that his own foundation collected illegal donations from Odebrecht subsidiary Braskem.

Referring to Cardoso (FHC) Sérgio Moro said in the leaked conversations, “we can’t offend someone who’s support is so important.”

In addition, Sérgio Moro’s wife Rosangela used to work for Flavio Arns, a high ranking member of Fernando Henrique Cardoso’s PSDB party in Paraná. Lava Jato’s political alignment to PSDB was common knowledge as early as 2015, yet both domestic and anglophone media continued to ignore or even dismss outright any notion of political motivation or bias. Commentators from Reuters, Bloomberg and elsewhere seized on any example of Lava Jato investigation of a PSDB politician, regardless of consequence or actual punishment, as proof that the anti-corruption operation was impartial. That Lava Jato prosecutors deliberately staged such investigations as if to appear impartial, makes international corporate media complicit in that deceit.

In early 2015, there was a forgotten incident which was once thought trivial but now seems far more consequential than it was considered at the time. At this point propaganda, domestic and international, for the coming coup to bring down Dilma Rousseff and the Workers Party was in full flow, and Sergio Moro’s Lava Jato was simply untouchable.

The overarching narrative being pushed was that simply the PT (Workers Party) WAS the party of corruption, and was being intentionally made synonymous with it. Serious analysts knew this wasn’t accurate, but given they had been in Government for 12 years, it was difficult to argue in their defence without appearing to defend corruption itself. 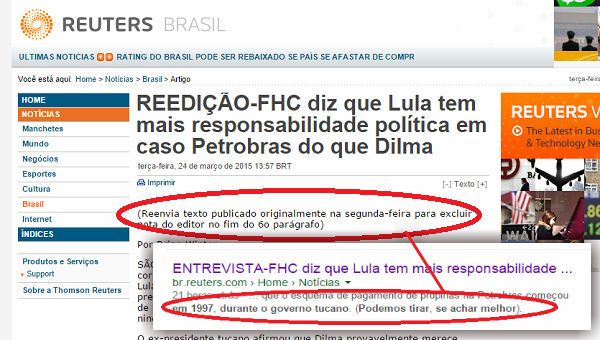 In March 2015, as the campaign for Dilma Rousseff’s removal was intensifying, a Reuters article was published, featuring quotes from former President Cardoso, in which he admitted that the Petrolão as it was called, the corruption scheme between Brazil’s 51% state owned oil company Petrobras, and its national construction sector, had begun in 1997, under his government and pre-dated Lula and the Workers Party taking office on January 1 2003.

This admission ran counter to the narrative being built, namely that the Workers Party was “a criminal enterprise” with sole responsibility for Petrobras related corruption cases.

The article was by Reuters Brazil’s chief correspondent Brian Winter, who had also previously ghostwritten Cardoso’s autobiography, ‘The Accidental President of Brazil’, published in 2007.

Someone noticed that the Portuguese version of the text contained an editors note: “Podemos tirar, se achar melhor” (we can take that out if you think best) following the paragraph containing Cardoso’s admission. The story went viral and was considered evidence of censorship and bias at Reuters at a crucial time for the country, with what many already identified as a coup d’état brewing.

Winter would claim it was a simple misunderstanding, and media colleagues leapt to his defence.

Following the scandal, in May 2015, Reuters chief correspondent Winter would leave the news agency to join Wall Street lobby and Think Tank AS/COA (Americas Society/Council of the Americas), which would become a de-facto international PR agency for Lava Jato and Sergio Moro, with whom Winter has a personal friendship. Reuters Brazil bureau chief Todd Benson, also left at the same moment to join Google Brazil.

Privatisation of Petrobras has been a US foreign policy goal for decades, and it was indeed part privatised under Cardoso in the 1990s. One of AS/COA’s principal patrons is Chevron, who according to leaked State Department cables worked with PSDB’s José Serra, the US-backed presidential candidate in 2002 and 2010, to lobby for a breaking of the so called pré-sal law. The law, introduced during Lula’s second mandate was intended to protect the sovereignty of Brazil’s vast offshore sub salt oil discoveries by enforcing Petrobras involvement in their exploration. Following Rousseff’s impeachment in 2016, with Serra in government the pré-sal law was soon gone. Three years earlier, in June 2013, documents leaked by Edward Snowden had revealed that Petrobras and the Rousseff government were the target of massive US espionage, at a level befitting an official enemy rather than friendly nation.

The propaganda around Lava Jato and Brazil’s long coup of 2013-18 was an integral feature of it, and the promotion of Sergio Moro by AS/COA, which is funded by some of the biggest corporate beneficiaries of the rapid neoliberalisation that followed Rousseff’s removal, was no accident. Its corporate members Boeing, Chevron, Exxon-Mobil, Monsanto and Microsoft have all gained enormously from the illegitimate removal of an elected president and rigging of the 2018 election through the imprisonment of her would be successor, former President Lula, by Sergio Moro’s operation Lava Jato.

Now under Bolsonaro and his Chicago Boy economy minister Paulo Guedes, and as a direct result of operation Lava Jato, the spectre of Petrobras privatisation is looming larger than ever.

As a US correspondent in Brazil confided in 2013, “There is an unwritten understanding among foreign correspondents that the US wants PSDB in power”. The calculus which saw them bet on Lava Jato and refusing to accept the 2014 election result had the desired effect of removing Rousseff and the PT from government, and they took power for the first time since 2002 as part of Temer’s post-coup government, yet tragicomically the PSDB themselves – having as MST’s Jose Pedro Stedile put it “lost their US rearguard” with the defeat of Hillary Clinton in 2016 – went on to be a political casualty of the 2018 election. Their candidate Geraldo Alckmin fell to below 5% of the vote, and the party lost a large number of congressional seats.

It is argued that PSDB could’ve simply sat out Dilma Rousseff’s second mandate and, without the tumult of the impeachment and the institutional and economic damage it (and Operation Lava Jato itself) caused, could have comfortably won the 2018 election. We will never know.

What we do know is that the active role of US media professionals in propagandising the destruction of Brazil’s democracy is becoming more clear by the week, and the absence of ethics evident at supposedly neutral foreign news agencies in the country is a spiralling journalistic disgrace.