Lava Jato chief Sérgio Moro was never a superhero, despite Anglo media’s tireless attempts to portray him as one.

Now that the Intercept has revealed that the US Department of Justice/Curitiba Public Prosecutor’s cooperative Lava Jato (Car Wash) anti-corruption investigation’s primary goal was to destroy the Brazilian Workers party and usher in ultra-neoliberalism which has, among other things, turned over 75% of the nation’s pre-salt petroleum reserves at below market rates to northern petroleum corporations and pushed 13 million Brazilians below the poverty line, it is worth taking a look at how the US integral state contributed to this unmitigated political, labor, environmental and human rights disaster.

The concept of the integral state was first introduced by Antonio Gramsci in 1930 to describe a process in which modern states replace the overt threat of violence with a manufacturing of popular consensus through bourgeois institutional allies such as political parties, corporations, educational institutions and the media, to maintain hegemony. Over the years the concept has deepened and today is sometimes referred to as the expanded state. In this article I will focus on how US media institutions lionized Lava Jato chief, judge Sergio Moro. On Moro’s Lava Jato task force, which has now been exposed for sabotaging the 2018 presidential elections and helping elect his current boss President Jair Bolsonaro in exchange for a Cabinet Minister position, Glenn Greenwald recently said, “the media portrayed them as these deities, these superhero figures that couldn’t be questioned”. And it’s true. While the world’s top human rights lawyers, legal scholars, activists like Noam Chomsky and Angela Davis, the AFL-CIO and dozens of progressive Democratic lawmakers declared that Lava Jato was a partisan lawfare attack and Lula was political prisoner, many figures in the Anglo media ignored their voices and continued to portray the Lava Jato task force as heroes.

Looking back on the events of the last 2 years, it is clear that one of the reasons that Lava Jato received so much positive press was due to the efforts of a think tank that was founded by David Rockefeller and funded by many of the corporations that most benefited from the 2016 coup and political imprisonment of Lula, including Boeing, Chevron, Exxon-Mobil, Monsanto and Microsoft.

AS/COA’s news magazine Americas Quarterly is geared towards an elite public, distributed in airport VIP lounges around the continent, and given out as a membership bonus, with individual membership costs starting at $10,000/year. Its main function, however, seems to be public relations, feeding corporate friendly news stories into media companies across the hemisphere, with commentary from AS/COA staff frequently appearing on CNN, NBC, Bloomberg and NPR, in press agencies like Reuters and AP, and in newspapers spanning the region from Clarin in Argentina to the Los Angeles Times.

Long before the Intercept revelations, even before Lula was arrested, Sérgio Moro was widely criticized both nationally and internationally for breaking Brazilian law when he released illegally taped phone conversations between Lula and Rousseff to Globo television network. He was criticized for failing to prosecute anyone from the PSDB party, whose top members like Jose Serra and Aecio Neves have been involved in a series of multi-million dollar bribery and illegal campaign financing scandals. He was accused of conflict of interest because his wife served as legal advisor to PSDB Vice Governor of Parana, Flavio Arns. In December, 2017, Odebrecht lawyer Tacla Duran accused the Lava Jato prosecution team of running a sentence reduction industry through Moro’s wife’s law firm. Moro was accused of pressuring businessmen to change their plea bargains to implicate Lula. He was accused of adulterating financial records from Odebrecht. He was accused of sadistic behavior after he ordered police to arrest former finance minister Guido Mantega during his wife’s chemotherapy session inside Albert Einstein hospital with an army of television cameras. He was accused in a article that was shared on the Brazilian Army website, of destroying 5 hard drives worth of physical evidence of bribery handed over by Odebrecht, in a move which is widely seen to have been made to protect PSDB politicians. He was accused of ethical violations when it was uncovered that he was living in a 256 meter2 luxury apartment which he owns in Curitiba while collecting a judicial rent subsidy. He was accused of legally harassing his critics, as in the case of ordering the police to raid the house of legal scholar Rafael Valim,who organized a seminar with UN Human Rights Commission lawyer Geoffrey Robertson criticizing the Lava Jato team for using Lawfare. And, most importantly, he was accused of sabotaging the economy by paralyzing Brazil’s largest construction companies in 2015 instead of treating them as too big to fail, in a move which caused an immediate 500,000 layoffs in the construction sector and, according a study cited by BBC, a 2.5% drop in the GDP. This was all publicly available information at the time that Lula was arrested, but none of it made it up into the commercial Anglo media.

Instead, under the stewardship of America’s Quarterly Editor Brian Winter, and his Assistant Editor Juliana Barbassa, who is now Latin America Desk Editor for the New York Times, AS/COA acted as a de facto PR agency for the Lava Jato investigation, feeding dozens of positive quotes lionizing Moro to  corporate media outlets. Winter appeared on TV programs gushing about Sergio Moro. He published an article in Foreign Policy comparing Moro to Teddy Roosevelt. And Americas Quarterly put Moro on its cover, dressed up like a character from Ghostbusters. 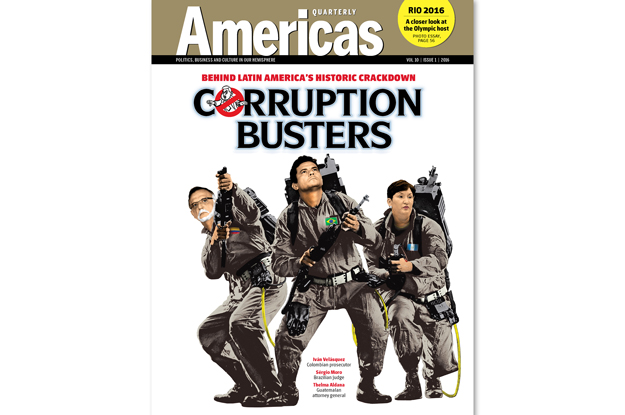 With the corporate think tanks leading the way, the major media outlets fell into line. Moro was named among the World’s Greatest Leaders by Fortune, the 100 Most Influential People by Time and put on the Fifty Most Influential list by Bloomberg Magazine. He has also received the 2018 “Person of the Year Award” from the Brazilian-American Chamber of Commerce and gave the 2018 commencement address at University of Notre Dame. In the height of a Brazilian election year, Netflix launched a TV series called The Mechanism in which thinly veiled characters based on Lula and Dilma Rousseff have their characters assassinated through slanderous portrayal of non-existent acts of corruption on a weekly basis, exposed by the “heroes” of the Lava Jato team.

Now the same correspondents, who spent years slandering a man who lifted 40 million people out of poverty while a homophobic, racist, rape culture promoter stole the 2018 presidential elections, are wringing their hands and feigning shock at the Intercept revelations. To anyone who has been following events during the last 5 years as Brazil was transformed from a burgeoning young social democracy to a client-fascist banana republic, nothing that has been revealed yet comes as a surprise.