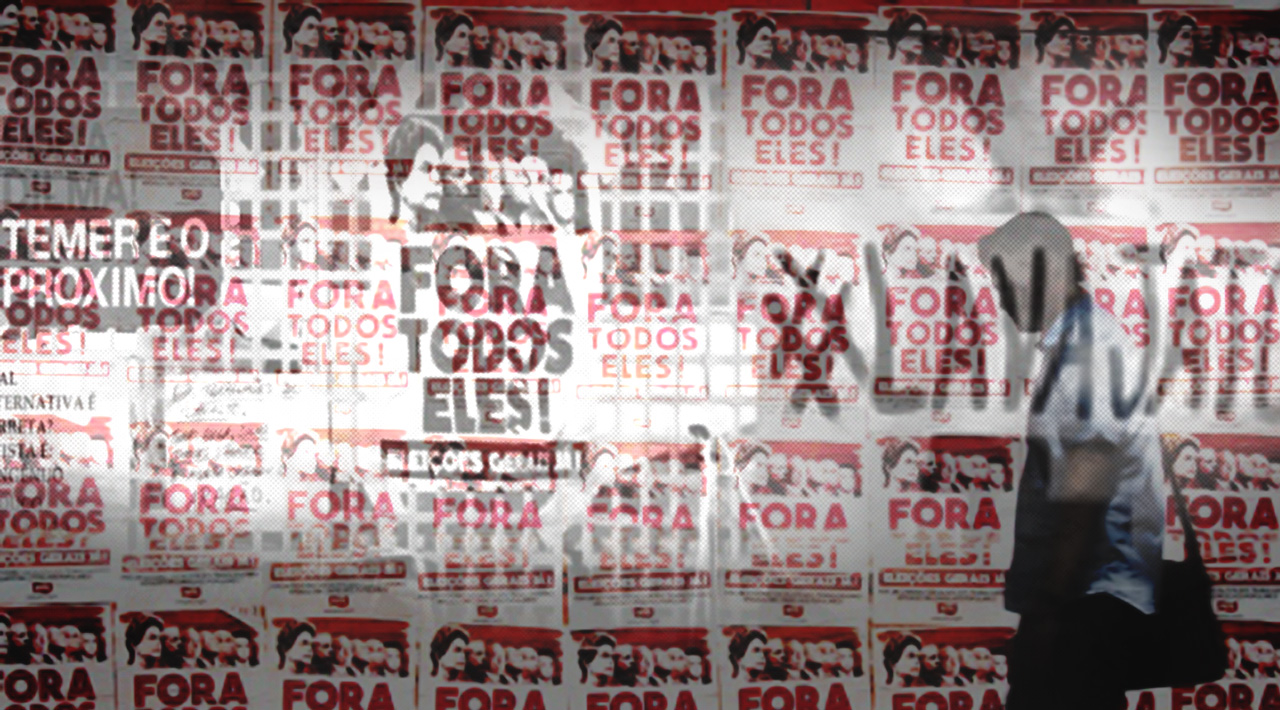 Left wing politicians and commentators who endorsed operation Lava Jato are now under fire for unwittingly helping bring about a Bolsonaro presidency, in what is now being called ‘The greatest judicial scandal in history‘.

As Army-decorated former Judge Sergio Moro and the US-backed Lava Jato task force fall from grace in what has been called the biggest judicial scandal in history, the same is happening to the political coalition which blindly endorsed them, one that was never limited to conservative media and neoliberal commentators.

Although leaked conversations from the Lava Jato task force have added key detail and reduced deniability, the picture they paint was well articulated long before, both in independent media and academic investigation. Yet until recently even the notion of US involvement in Lava Jato, a matter of public record since 2015, was being glibly dismissed, even by some supposedly on the “left”, both in Brazil, and in the Anglosphere.

With available evidence of US involvement growing by the week, combined with admission of a military hand in both the 2016 coup against Dilma Rousseff and the 2018 pre-election jailing of Lula da Silva, former congressman Jean Wyllys turned on members of his party, the PSOL, for their support of operation Lava Jato. Luciana Genro, who was the party’s presidential candidate in 2014 was the primary target.

For a while Operation Lava Jato was beyond reproach, and any criticism of it was shouted down as Workers Party rhetoric, but the biggest leftist parties, and some internal currents of PSOL, actively protested against the coup, and voiced early concerns about the nascent anti-corruption investigation.

Yet Genro, leader of the MES tendency within the party, was vocal in support for Lava Jato, which PSOL and other smaller vanguard left parties saw as a political opportunity. Decapitation of the PT in a phoney anti-corruption campaign was imagined to be raising the curtain on their own historic moment. It never happened, as the backlash of antipetismo spread into a generalised hysteria against the left.

Wyllys wrote on social media, posting a screen grab of a 2017 tweet from Genro and the MES, supporting Lula’s prosecution: “Well, it’s not just “Lava Jato” accomplices in the commercial media who owe public apologies for their mistake, driven by hatred and political resentment against Lula and the PT. I hope that everyone who went without question into the trap of a “fight against corruption” will apologize.”.

Fringe Trotskyist party PSTU, which like the PSOL was formed as a splinter from the Workers Party, also embarrassed itself during this period, with its president Zé Maria endorsing both the campaign for Dilma Rousseff’s impeachment and the weaponised anti-corruption fight. 2018 presidential candidate Vera Lúcia Salgado insisted that Lula was “reaping what he had sown”, in a very unusual BBC interview shortly after his arrest. In 2016 PSTU denied the impeachment of Dilma Rousseff constituted a coup and also dismissed allegations of U.S. connivance, and the motivations behind its involvement in Lava Jato – both of which now proven with court documents – as a “conspiracy theory“. Those making non-partisan and founded critiques of imperial and geopolitical undercurrents to what was being done in Brazil were dismissed as ‘governistas’ – blind defenders of the Workers Party.

Green-liberal presidential candidate Marina Silva had the U.S. Government’s backing as a centre-left second horse in the race at the 2010 and 2014 elections, with a very similar strategy and political expediency to what Yaku Pérez currently provides in Ecuador. Marina also enthusiastically endorsed both Dilma Rousseff’s impeachment and operation Lava Jato. Denying a coup was in motion, she recommended that her centre-left Rede party vote in favour for Rousseff’s impeachment.

In October 2016, after Lava Jato had helped underpin the campaign for the president’s removal, Silva called it “political reform in practice“, and claimed that Lava Jato’s work was “one of the greatest contributions ever made to the country”.

After having done just well enough to prevent a first round victory for Dilma Rousseff in 2014, and then backing neoliberal Aécio Neves in the runoff, Marina Silva and her supporters imagined a glorious 2018 election run.

Marina Silva came in eighth place with 1% of the vote.

These examples look especially foolish today, but they were not isolated. Whether opportunists or well meaning dupes, manipulation of the media to build public demand for prosecutions was a fundamental of operation Lava Jato, and they fell for it. This use of the press was inspired by Italy’s anti-corruption purge of the 1990s, and the propagandist journalism which enabled its repeat in Brazil is now under justified fire. It was only later that Reginald Bartholomew, Ambassador to Italy at the time, confessed to U.S. involvement. In Italy, as in Brazil, many lament a failure of the far-left to capitalise on Operation Mani Pulite, the inspiration for Lava Jato, rather than acknowledge that what followed was the political result of a concerted effort to remove the left from government. Foot soldiers in a PR campaign which provided cover for what was happening during 2014-2018 are having their embarrassing internet history presented back to them.

Much of a mistrust on the left, which hinders efforts to build a broad front against Bolsonarismo, is a result of such support for Lava Jato and/or Dilma Rousseff’s impeachment. This went beyond normal ideological and political critique of the incumbent president and her administration; there is still resentment that sections of the left seemed prepared to watch Brazil burn for an imagined political advantage which never came. Intense campaigning by vanguard left groups from 2013-16 seemed to evaporate, their presence on the streets noticeably lessened, following Rousseff’s fall.

Pra inglês ver… (for the English to see)

The international public relations campaign for Lava Jato is a story in itself, but media omission of U.S. involvement in it now looks increasingly conspicuous, both at the “progressive” end of Anglo corporate media, the New York Times and Guardian, and in publications such as Jacobin which defines itself as socialist. The latter took until August 2020, almost two years after Bolsonaro was elected, to publish even mild critique of the Department of Justice’s role in Operation Lava Jato which brought him to power, and this came only after leaked Telegram messages made such malfeasance undeniable. Jacobin had published repeated attacks on the Workers Party during the coup period, falsely depicting it as neoliberal. As recently as 2017 it had talked about Lava Jato being an opportunity for the left, and downplayed any imperial connotation to U.S. involvement. Popular podcast the Jimmy Dore show ran several glowing segments on Operation Lava Jato that crossed the line into outright propaganda. Lava Jato was called “a work of art”, with a co-presenter even saying that he wanted a “Lava Jato T-Shirt”. How the Jimmy Dore show came to be running such blatant prop for a weaponised Brazilian anti-corruption investigation is not known. New Yorker magazine published for its left liberal audience this brazenly pro-Lava Jato article at the time of Lula’s 2017 prosecution, just as behind closed doors the business and banking community were calling for military intervention. Its author, Bloomberg’s Alex Cuadros, dismissed critiques of the operation based in fact. Two years earlier in the NYT he denied that a coup had taken place against Rousseff at all, adding that the Workers Party “has itself to blame” for Dilma’s plight. Just weeks following her ouster, he addressed the libertarian CATO institute, about how her illegitimate impeachment, and the now disgraced Operation Lava Jato, were signals of “strengthening institutions” in Brazil.

Throughout the coup, commentators on left and right long demanded that the Workers Party engage in self criticism, whilst it faced off a lawfare campaign backed by both the Military and the United States, intended to wipe it out as an electoral force. Whatever the vanguard left think about the PT, as it celebrates the 41st anniversary of its founding, it remains the biggest and most successful left wing party in Brazil by a long way, and one which no progressive administration could govern without.

Brazil’s democracy, its economy, and the hard-fought rights of its people were wrecked by operation Lava Jato and the forces behind it. Thus sectors of the left, at home and abroad, which were seduced by a revanchist, reactionary crusade, still need to embark on their own period of thorough self reflection.