I never thought I’d get here.

And sometimes I want to believe that it will not get worse. But then I pinch myself: I did not think Dilma would fall, I did not think Doria would be Mayor of São Paulo, I did not think Trump would be US President. I never thought I would see people wanting to teach the Pope how to read the Bible (literally) or accusing The Economist of being a “communist.” I also did not think I would see a reporter suffer aggression, or an artist having a family threatened with death.

Last week I read a tweet (I lost the original, if anyone knows the author please write us) saying that our generation grew up having democracy as an unshakable right. But this right was not guaranteed for the generation of my parents, who were young during the period of the Military Dictatorship. Nor was it true for my grandparents, who lived through the Vargas years. It may not be true for those who come after us.

But it was true for me, so I had no way of knowing how shaken I would get when I saw the #EleNao protesters gathering in Largo da Batata (and in many cities around the country, I know), a concentration of flags, of the most diverse orientations, yet concentrated on one urgent subject: to brake the advance of authoritarianism in Brazil.

In the past weeks we saw a judge preventing an interview, a politician wanting to remove a magazine from the shelves, a military General saying that the Constitution should be rewritten by a “commission of notables”, people defending revocation of rights, a candidate saying on television that he will not accept result other than a victory, which he takes for granted. These are just a few examples that come to me, I’m sure there are many more. A certain military official linked to a certain candidate said that “books which do not tell the truth about the military regime” should be “taken out of circulation” — which truth, I ask? Certainly there is  more to happen this next days,  right before the first round of elections that will choose federal, state, and state presidents, governors, senators, and deputies.

I’m 42 and I grew up during the late 70s/early 80s “redemocratization” years in Brazil. When I was a little girl, I saw through the tube TVs (where we could choose from the seven channels available!) that programmes were preceded with a little vignette: a form signed by a censor. To me censorship was this, but of course it was much more. Censorship operated within newsrooms and newspapers, within publishers and record labels, within radios and TVs, selecting in advance what would or would not go public. This text, incidentally, would not. As well as much of the content of Hysteria and, I dare say, today’s media in Brazil. This was of course, on behalf of the people of “morals and good manners”, as they were called at the time, the equivalent of the “good citizens” (Cidadão do bem) and member of the “Traditional Brazilian family” of today.

When I was a child, my parents lived surrounded by Latin American expatriates, who sometimes came to live with us from other countries that also lived under dictatorships, such as Chile and Argentina. I did not understand why people talked about missing people, what it meant to shout “Diretas Já”, or why there was so much emotion when President Tancredo Neves was elected and so much consternation when he died shortly afterwards. But now I know. Today, I know what happened on Maria Antonia Street fifty years ago, I know why there is a Military Police and the “Voice of Brazil” still airs everyday on every radio in the country. I know because my mother taught me. I know because there are people who remember and tell. People like the old ladies who were protesting last Saturday, ladies like my mother:

When I was little they were adults, I was the hope and they were the resistance. And they still are.

I could not imagine that we would march together, up Avenida Rebouças, shouting slogans, arms folded, fists up, helping those who were tired of walking, sharing bottles of mineral water, handing out leaflets to people who screamed in support from buses stranded in the lanes.

I never imagined that we would see Avenida Paulista go silent to hear two girls sing a Brazilian version of the “Bella Ciao” anthem in front of the Conjunto Nacional building.

I never thought we’d get here, but here we are. And for this very reason I am sure that no matter what happens, we will be together and we will be marching forward. 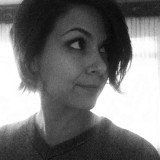 Gaía Passarelli is a writer, journalist and television presenter from São Paulo.