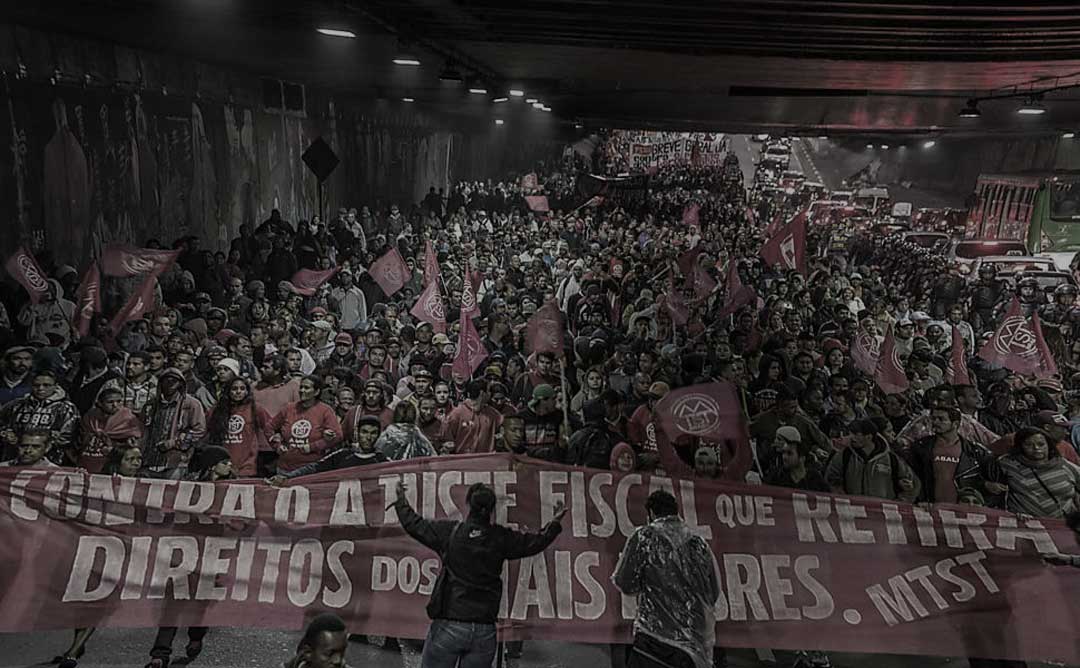 Back in October 2014,  a thirty-something, upper-middle class couple carry a large red flag towards a demonstration a few kilometres away, having walked the length of São Paulo’s leafy Rua Oscar Freire – an affluent area lined with boutiques & international chains. By the time the pair reach main artery Avenida Reboucas they are visibly shaken from what they had experienced en-route.

Other similar stories emerged during the election period, including a local journalist who complained of verbal & physical intimidation in a public place for wearing red & displaying left sympathies and a Swedish correspondent was presented as a “Leftist” on Globo News as if she were an extraterrestrial. As the atmosphere in the cities’ Bairros Nobres became more polarised and hostile, these kind of situations were accompanied by anecdotes of self-censorship on social media for fear of unwanted attention.

Regardless of noble attempts to find some reason within a sea of ignorance and stupidity during Sunday’s protest, there was little on show – what there was drowned out by calls for military intervention, requests for “help” from Barack Obama, & cold-war style anti-communist hysteria.

Despite technical recession, growing inflation, and job losses in the past year, the economic situation simply isn’t grave enough to warrant the calls being made, and any serious analyst will corroborate that, if asked. Brasil’s grande-midia have issued statements which call for stability and respect of democratic institutions in recent weeks, but it is too late – the crowds are already incited and radicalised from almost two year’s relentless media language of crisis and whatever local signs appear to confirm it.

Selected quotes from protesters claiming to be disillusioned former PT voters naturally made it to the fore outside, but in Brasil a very different picture was formed from these smaller, more hateful demonstrations. The wearing of red was again reportedly a common trigger for verbal abuse and in some cases actual physical attack. (Detailed statistical study of the Vitoria, ES protester here).

Another worrying development is the apparent growth amongst protesters towards double-digit popularity for far-right “bullet-caucus” congressman & former soldier, Jair Bolsonaro. To give an idea of what kind of politician Bolsonaro is, this interview by UK writer & personality Stephen Fry from 2013 is as informative as it is disturbing.

The video below no longer represents an isolated lunatic fringe but the vociferous, visceral, antidemocratic core to the demonstrations, where traditional ultraconservatives like the former fringe presidential candidate Levy Fidelix share platforms with everything from Freemasons to young, foreign-funded Libertarians.

Homophobia, racism, fascism, class-hatred – it’s all there, alongside those who turned out simply because they think the cost of living has become too high.

That Sunday saw Lava-Jato prosecutor Sergio Moro deified by protesters is also indicative of the partisanship and lack of perspective regarding the operation’s effect on Brasil and its economy.

The line repeated often in foreign media is that Lava-Jato will leave a positive legacy, that it is “Brasil’s institutions finally being allowed to do their job”. Could it be of lasting benefit to Brasil and its democracy? Theoretically, but there are few positive examples to reference.

Despite this, Rousseff herself is in public support of Lava Jato, and assumed by sensible commentators and even political rivals to be clear of personal involvement. She is actually given credit in usually unfavourable arenas for this anti-corruption crackdown because previous administrations would’ve blocked such investigations.

Now this pro Lava-Jato perspective has been joined by foreign op-eds opposing “Impeachment” or a “Coup” (in the rare instances that they use the word). The failure of Folha to publish the NYT’s latest op-ed calling for democratic stability in Brasil on its front page was considered a telling sign. Instead the headline was news that opposition hero and former President Fernando Henrique Cardoso, attacked by the far-right for opposing impeachment just weeks ago, had flip-flopped – and was now calling for Rousseff’s resignation.

What these foreign columns miss however is that on the Brazilian left, Lava-Jato is widely considered the central thrust of the Coup itself. It is seen by many as an anti-national campaign designed to destroy the Workers Party as an electoral force, and create a vacuum where the economy can be liberalised regardless of the electorate’s will. Sector after sector, such as construction & energy are now crippled by the investigation, which has caused waves of job losses as dominoes topple across other dependent areas of the economy. People are understandably questioning why it is being pursued in such a disruptive & destructive manner. The beneficiaries of any such political chaos are likely to include the most reactionary forces that exist in the country, such as legacy party of the dictatorship, DEM.

What foreign media very rarely do is talk to the actual electors of Dilma Rousseff or the Brazilian left in general. Unions, Social Movements, parties such as PSOL, the working class and urban intellectuals that have kept PT in power since 2003 are almost entirely invisible. This is for the most part editorial bias, but also down to lack of English language amongst older activists, and generally less engagement with the outside world on social media.

Left demonstrations meanwhile are either ignored entirely or if covered, the innuendo is that the protesters are paid. The euphemism “bussed-in” when used in a city like São Paulo should be treated with caution as it makes no allowance for the fact that Avenida Paulista, where the country’s most photogenic protests traditionally take place, runs though or close to the most wealthy neighbourhoods of the city, such as Jardins and Higienopolis. There is nothing sinister or unusual about protesters being brought in from the periphery and countryside where they live, any more than when demonstrations take place in Central London. The alternative is to have no working class protest visible in the media capital of the country at all.

An interesting example was when housing activist movement MTST protested prior to the World Cup in 2014. Their events, in particular their threatened “Red June”, were reported as they represented a threat to tournament and thus government credibility. Yet once the MTST negotiated social housing concessions from Federal Government we never heard from them in English again despite organising massive subsequent mobilisations in support of a progressive, egalitarian political agenda, if not the government itself.

Days before Sunday 16/8, the Margarida march of Rural women brought higher numbers to Brasilia, in support of progressive policy and principles, yet bringing no international coverage.

Thursday 20/8 will see a national anti-coup demonstration unlikely to receive any media either.

It could be argued that this is simply down to a sitting government receiving a normal level of media scrutiny which it warrants, or “holding power to account”.

This is however a convenient simplification of Brasil’s political system and the actual distribution of power – across executive, legislative, judicial, municipal & in particular, state level, where opposition governors, such as in the states of São Paulo and Parana, wield enormous power practically without scrutiny.

As a result of all this, the misleading impression built over the last two years was that Rousseff had no support, despite winning an election. The reality is that she has support by default from a silent centre-left electorate, not engaged with either social movements or these increasingly transparent right-wing street protests. Much like the Democrats in the United States or Labour in the United Kingdom, barring catastrophe, this PT vote will likely persist unless a superior alternative with core principles of worker rights, social inclusion, equality & development arrives.

However, with Rousseff’s approval standing at just 8% (Prior to June 2013 protests it was 79%) the left are a significant element of that 92% disgruntled majority, but for very different reasons, such as her perceived inability to deal with the right-wing forces attempting to seize power. What is being ignored in the data however is that lack of approval for a President does not automatically signify support for resignation or impeachment, let alone an illegal one.

Brasil’s left now actually have more reason than the right to be critical of a government they helped elect given that since taking a platform against the orthodox neoliberal economic proposals of her opponent she has in effect been forced to adopt policies to appease the markets, including the appointment of Chicago School Finance Minister Joaquim Levy and a budget-cutting austerity programme opposed by practically everyone.

This pragmatic programme’s similarities to what would’ve occurred should she have lost the election is completely lost on her critics.

Perception of the country is taking a battering however. This is in part editorial propaganda on the part of northern media, analogous to what is regularly published about BRICS economic partners and G7 competitors, China, India & Russia. The difference is that in Brasil, these North American & European articles are, when supportive of position, used as “proof” by those who more often than not informed their creation – and the circle remains unbroken.

Brasil’s middle class is known for having an acute sensitivity to the country’s image abroad – now might be the time to rediscover it.