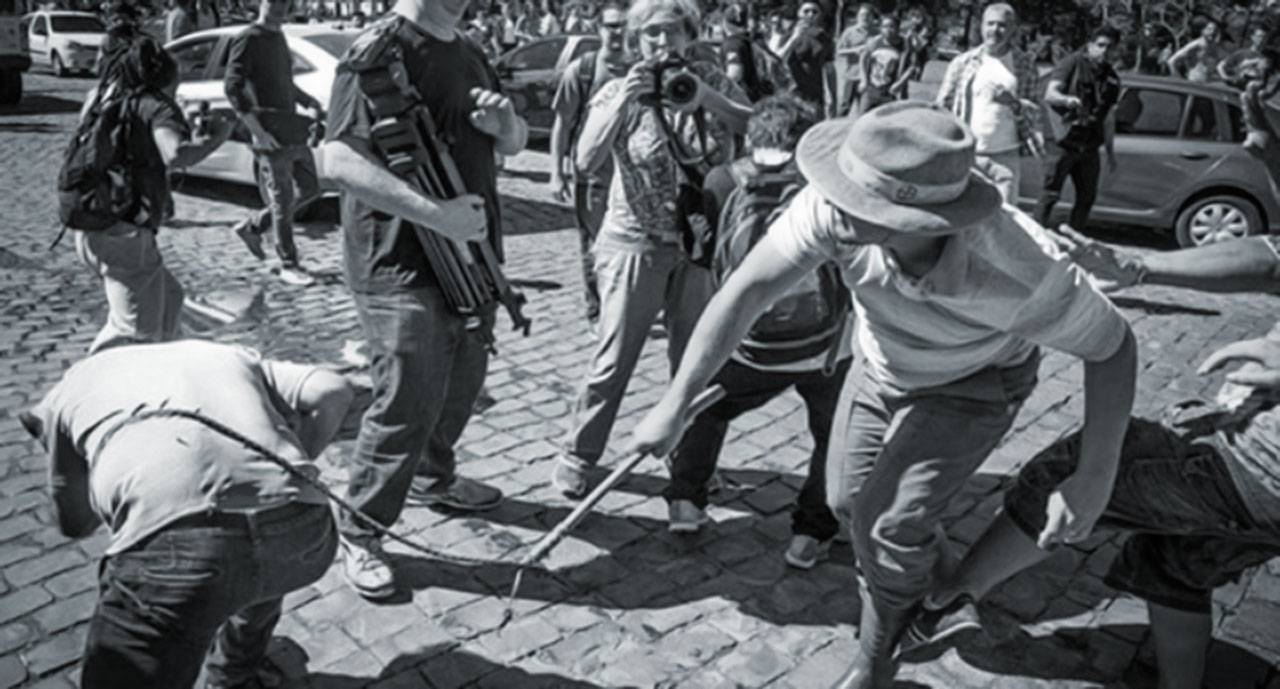 In Rio Grande do Sul, right wing militia beats up four women during speech by Lula, blocks road to prevent people from arriving at event.

For the past four years, the US-government has collaborated on a political witchhunt, called the Lava Jato investigation, designed to destroy the legacy of former president Luis Inacio “Lula” da Silva and other left wing politicians across Latin America to open up exploitation of natural resources for US corporations. During the course of prosecuting Lula for illegal reforms on an apartment he is unable to prove he ever owned or set foot in, US State Department-trained judge and prosecutor Sergio Moro has repeatedly broken Brazilian law, conducting illegal phone taps and leaking them to the media, illegally collaborating with the US Department of Justice, receiving government judicial rent subsidy while owning a penthouse apartment, and recieiving a monthly salary which is over double the legal limit for judges. Despite the constant barrage of harassment against Lula, which is exacerbated by a conservative, partisan media and now Netflix, he remains the most popular politician in the country and favored candidate in the 2018 presidential elections.

As conservatives grow increasingly frustrated with the left’s continued popularity, violence against labor union members, activists and leftist politicians is on the rise. Ten leftist activists have been assasinated in the last 5 months and last week, as Lula made a series of Caravan visits to towns in Rio Grande de Sul state, right-wing militias physically attacked men and women who came out to see him speak with brass knuckles, rocks and whips. The Partido dos Trabalhadores (Workers Party/PT) congessional caucus issued the following public statement condemning violent suppression of the right to assembly.

Since de beginning of the caravan activities, in the city of Bagé, a group used paramilitary militia tactics to attack the entourage vehicles  with stones and other objects. In addition, militiamen also assaulted PT supporters.  A group attacked four women with fascist violence violence in Cruz Alta and others supporters of Lula in each city along the way.

From the first day of the caravan the local, state and federal authorities – including the state governor and the ministers of Public Security and Justice – were notified by the PT regarding the threats and violent actions of the militiamen. Despite this, the belligerence of the rural militias did not cease and, in some moments, even increased.

The climax of this violence occurred on Friday, April 23, in Passo Fundo, where the access road to the city was blocked and buses were stoned by the fascist mob that acted as  a holder of the privileges of the lords of colonial times.

We denounce to the world the deepening of the rupture of democracy in Brazil, a process composed of a series of measures of exception adopted in the face of the omission – and of the complicity, in many cases – of the State in the face of growing political violence against the left in general and the Worker’s Party (PT) in particular.

As parliamentarians elected by popular vote to represent the ideals of the Workers’ Party (PT), we will continue to hold public debates across the country and will not be intimidated by anyone. The Lula for Brazil caravan will continue until the end, always firmly defending Lula’s right to run for the presidency in the October elections.