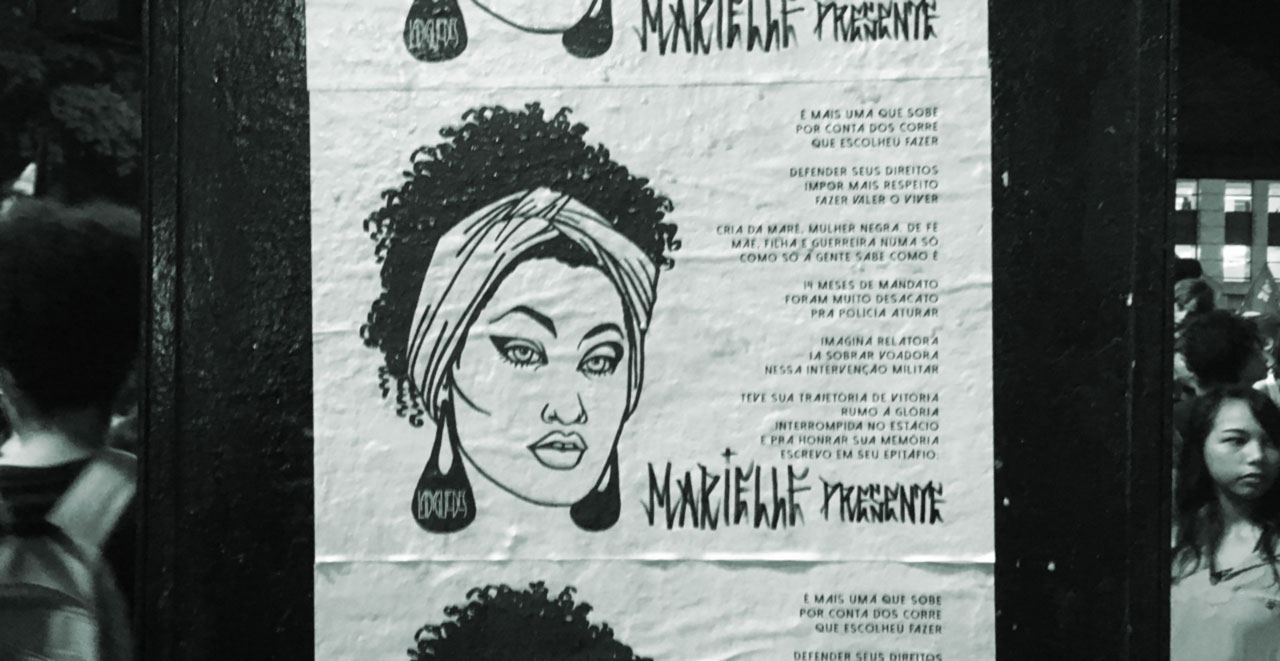 The cowardly murder of socialist councilwoman Marielle Franco, on March 14, has all the hallmarks of political assassination. The protests that swept across Brazil on the night of March 15 were mobilised at short notice in outrage at a political act, and not merely a spontaneous outcry over Brazilians’ frustration with “one more gunfire death” as some Anglo media companies tried to frame it.  Marielle was assassinated by a trained shooter with a common Military Police weapon. Rio de Janeiro is currently under military occupation,  and she was its most prominent critic.

Marielle Franco was also a living example of everything the neo-fascist Brazilian military hates: a black, LGBT, feminist, socialist from a favela.

In the wake of this, commentator Brian Winter, of Wall Street lobby AS/COA, posted, then later deleted a tweet which depicted Marielle’s political assassination as an unusual occurrence in Brazil, which is preposterous. And this reflects a general trend, journalists who either ignored, obfuscated or denied Brazil’s 2016 coup now face great difficulty in trying to explain what has been happening in the country since.

Brazil is one of the World’s most dangerous countries for leftist activists. According to the Catholic Church’s Pastoral Land Commission, there have been 1833 political assassinations of agrarian reform activists in the Brazilian countryside since the end of the Military Dictatorship. Most of these were committed by agribusiness plantation and ranch owners involved in monoculture production and export of goods like beef and soy to the American and European markets.

The sociologist, feminist and black movement activist was executed in Rio de Janeiro. Marielle, who was elected to the city council with the 4th highest vote tally in 2016, worked in the Maré favela, where she was born and raised and, the week before she was murdered, publicly denounced police violence against teenagers in Acari favela.

Nascimento was one of the leaders of the Association of Mestizos, Indigenous peoples and Maroon community descendents of Amazonia (CAINQUIAMA). According to the civil police, he was shot in front of his house in the city of Barcerena. Nascimento was a vocal critic of a recent toxic waste disaster committed by the Norwegian-owned Hydro Alunorte aluminum plant earlier that month.

Rodrigues’ body was found with bullet holes and barbed wire wrapped around his neck, after three days of searches. His body was found in a patch of forest on the edge of a dirt road. He had been kidnapped by four men who are believed to be police officers.

Carlão was one of the leaders of the PDS Rio Jatobá agrarian reform settlement in Paranatinga, Mato Grosso and was shot to death by a man on a motorcycle in front of the Mayor’s Office in broad daylight. He was in a car with his daughter and wife, who was also injured in the attack. Carlão had made a series of complaints about police violence and had received death threats.

Ribas was a community leader in Vila São Luis, a favela in Porto Alegre’s North side. He had stopped sleeping in his house a few days earlier due to a battle between neighborhood drug gangs. On the day he was assassinated, he returned home to pick up some clothes, but ended up being murdered. The police suspect that Ribas was executed by gang members because he was a community leader who criticized their actions in the neighborhood.

Matos, 33,  was one of the youngest state leaders of the MST and lived in the Boa Sorte agrarian reform settlement.  He was killed in his home, with three gun shots, in front of his son.

Resplandes was executed in the town of Anapu, Pará. He was stopped on his motorcycle by two men. One of them shot him in the back and, as he lay on the ground, the other man shot him in the head. American Nun Dorothy Stang was assassinated by loggers in the same town in 2005.

Nascimento was a community leader in the Madureira neighborhood. His body was found with signs of hanging one day after he disappeared. He had made a series of complaints against a paramilitary militia gang days before his execution.

Santos was a leader of the SOS-Jobs social movement in Sergipe and was shot in the head by two men who came to his house saying that they wanted to give him their resumes. After suggesting that they deliver their resumes directly to a company that is building a thermoelectric plant in the region, he was assassinated.

Santos was shot while in the company of four other landless rural workers. The man accused of the assassination is the foreman of a plantation that was occupied by workers connected to the Federação dos Trabalhadores de Agricultura do Estado do Pará (Pará State Federation of Agricultural Workers/FETAGRI). The police were at the location moments beforehand and the workers who witnessed the crime accuse them of helping the foreman and the other gunmen escape the crime scene.

Binho, as he was known as, was a leader of Pitanga dos Palmares, a community of descendents of escaped slaves in Simões Filho, Bahia. He had just dropped his son off at school and was going to the funeral of a friend when he was stopped by a car. A man got out and fired several shots at Binho.