With Lula jailed, his Workers Party vice presidential candidate, and would be substitute, Fernando Haddad is now being bombarded with legal actions from the stronghold of political arch enemies PSDB.

In simpler times, São Paulo Mayor Fernando Haddad’s flagship policies of implementing an extensive system of cycle lanes and reducing speed limits in the famously gridlocked city were lauded internationally, and by the city’s progressive inhabitants, whilst drawing anger and ire from conservative drivers and media.

Making the city liveable was Fernando Haddad’s objective. “Where there’s a wall, we replace with a fence, where there’s a fence, we remove it” he remarked at the time. Brasil Wire published an exclusive interview with Haddad’s secretary of urban development in 2015.

Despite the plaudits that his tenure received across a range of urban policy, he was easily beaten by PSDB’s João Doria in the 2016 Mayoral elections. Doria, who quickly raised speed limits, ordered municipal guards to take away homeless people’s blankets, began dismantling cycleways and launched the biggest municipal privatisation programme in history, was elected on a promise that he would see out his term. But like the last PSDB mayor of São Paulo, José Serra, Doria was gone after 15 months, resigning to run for State Governor following confirmation of Geraldo Alckmin’s PSDB Candidacy for President. São Paulo state is nicknamed Tucanistão, due to the PSDB’s dominance of its politics and power. It was natural then that São Paulo would be the stage for the TV Globo promoted protests for the impeachment of Dilma Rousseff.

Ironically, those telegenic protests which were beamed around the country and the world to create the appearance of unanimous support for Rousseff’s removal, took place on the city’s Avenida Paulista on Sundays – thus they were only made possible by Haddad’s popular initiative to open the huge avenue exclusively to pedestrians that day, as a kind of “asphalt beach” in the landlocked megacity.

On the brink of the 2018 elections, Haddad, the candidate for vice president on Lula’s ticket, and substitute should the former President be prevented from running, has himself, like his running mate, become the target of the Judiciary, in what is becoming the new normal for Workers Party candidates.

On Tuesday 21st August, the press reported that the former mayor of São Paulo became defendant in a case of alleged impropriety related to the construction of the CeageSP-Ibirapuera cycleway. It was seen as deeply ironic that it would be the Cycle lanes his conservative opponents would use to attack him.

Then on Monday 27st August, another process was launched in São Paulo against Haddad, part of an “armoury” of potential processes which observers had long warned would be used to disrupt any potential Haddad Presidential Candidacy.

On Tuesday 3rd September, yet another case, of “corruption and money laundering” was accepted by the São Paulo Public Ministry. 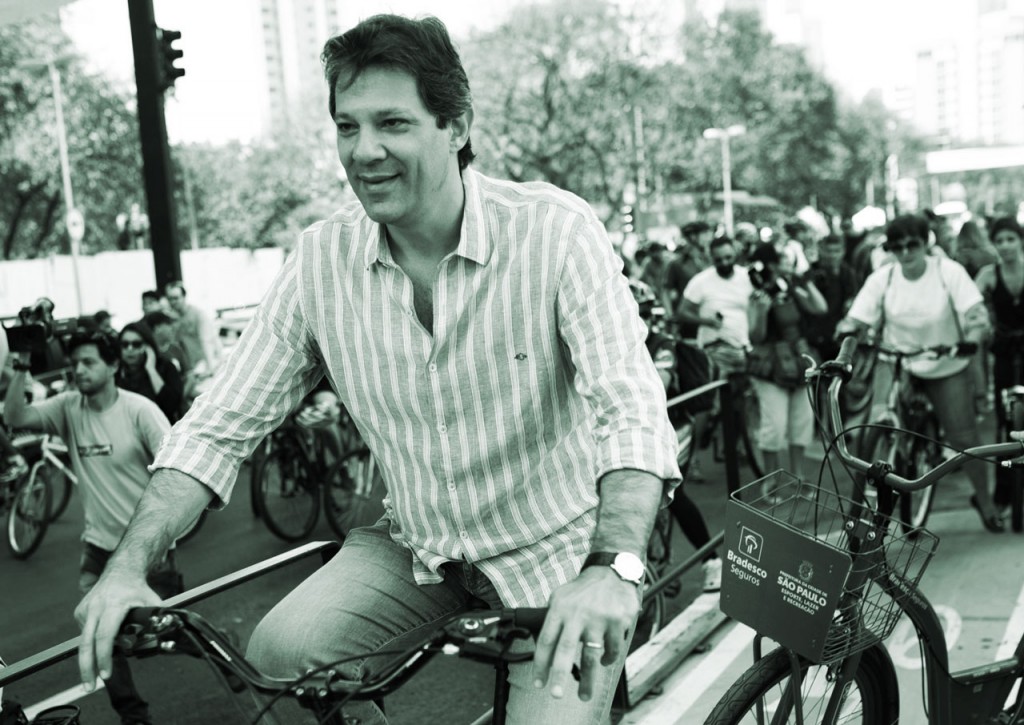 The sudden surge in cases against Haddad are another demonstration of why any report on a charge or insinuation of corruption needs to be properly explained in the media, as does the source of the charge and any other vested interests. This needs to be considered within an election scenario. In the case of Dilma Rousseff, how many casual viewers and readers of Anglo media simply think she was removed “for corruption”. In the case of Lula, how many mainstream features in English have explained that he is in jail not for “corruption and money laundering”, “related to Petrobras” but for “indeterminate acts” and “without material evidence” because they couldn’t find any, relating to an apartment that they could not prove he even ever owned or set foot in.

The “cycleway” action against the former São Paulo Mayor is from February 2016, filed by Marcelo Milani and Nelson Sampaio. Judge Kenichi Koyama, of the 11th São Paulo Public Treasury Court, accepted the complaint on August 20 – just 5 days after Haddad was registered in the Electoral Court as Lula’s vice, that registration itself was forced on the candidate by a sudden change of regulations.

The lanes, over 12 km long, were to cost R$ 54 million and, according to an audit cited the Public Prosecutor’s Office of São Paulo, went R$ 5.2 million over budget. The prosecution questioned the lack of bidding process and alleged overbilling. In addition to Haddad, Estadão reports that the other defendants are former lawyers Jilmar Tatto, now PT candidate to the Senate for São Paulo, Ricardo Teixeira, a former advisor to Teixeira and the company Jofege Pavimentação e Construção, which was contracted to carry out the work. Haddad, according to the prosecutors, would have “engendered” the alleged illegalities as a result of his “fixation” with the bicycle lanes. The former mayor and Tatto reported that they had no relation to the contract, which was signed by the secretariat of the Subprefeituras. Tatto’s Lawyer Luiz Tarcisio Ferreira, said that his client should be removed from the action for not having connection with the facts, and added that the case is only in the press “because it involves PT candidates”.

On the surface the second accusation looks more serious, involving personal enrichment, similar to the case which just has seen his successor as Mayor, João Doria, prosecuted. Doria insists his prosecution will not interrupt his campaign, so it is unclear if an unresolved legal process could damage Haddad’s, but for TV Globo, the mere insinuation of corruption on the part of a Workers Party  politician is enough for a trial by media.

On Tuesday 28th August, a day after the case was filed, Haddad went on the offensive and dismissed the action as an attempt to create a media talking point with which to harm his image with the electorate. “Suddenly, something from years ago appears days before the elections,” he said. He recalled that the former president of UTC, Ricardo Pessoa, the source in the case, is “confessedly corrupt”. “This corrupt man has already lied nine times, according to the very Justice that filed other inquiries. So, what does the Public Prosecutor has in its hand? The word of a thug who lied to Justice and had his interests contradicted during my government” he continued. The frustrated interests of the company, explains the former mayor, are related to a road work canceled by Haddad’s administration in 2013. “In my specific case, he has reason to lie. After 44 days in office, I canceled an expensive UTC construction project in partnership with Odebrecht. A tunnel named after Roberto Marinho (Globo founder). This happened on February 14 of that year. I canceled the work because my secretary brought to me information that the work would be overpriced.”

At a morning news conference in Rio de Janeiro, Haddad talked about the case’s incongruities. “How does a Mayor who cancels a construction project of a corrupt company after being informed of the work going overbudget, go through this embarrassment? Instead of receiving the Public Prosecutor’s due thanks for having saved a few hundred million Reais …in which I demonstrated that it is possible to govern smoothly, canceling a contract that was signed before I took office… they want to create a case (against me).”

Prosecutor Wilson Tafner’s indictment is that throughout 2013, UTC paid off Haddad’s election campaign debt with graphics work for his campaign, in an exchange of favors. The former mayor says that there’s no material evidence that this ever happened. “The owner of the graphics company won’t even confirm it.  He did not confirm that he worked on my campaign. In fact it worked for the state government, not the municipal one.” The State Governor at this point was PSDB’s Geraldo Alckmin, now Haddad’s Presidential rival, who is  struggling in the polls after decades of corruption allegations of his own, including a federal police investigation into bribes and kickbacks during the environmentally devastating construction of the rodoanel ring highway, which went R$600 million over budget during Alckmin’s management. None of these cases have ever seriously threatened Alckmin’s  power.

The Workers Party issued a note in support of Haddad accusing PSDB and Geraldo Alckmin of having the Judiciary do their electoral work for them: “Unable to convince with proposals and to win through the vote, the opponents of the Lula-Haddad candidacy and of the Brazilian people, appeal once again to the judiciary, with accusations without evidence to create scandal in the media. The most recent attack of the São Paulo Public Prosecutors’ Office against Vice Presidential Candidate Fernando Haddad is further evidence that sectors of the institution are politically committed to the PSDB, a party that supports the coup government of Temer and that has suffered four consecutive election defeats.”

If Lula’s candidacy is barred and Haddad runs in his place, he promises to implement “Plano Lula”, a programme formulated with the former President, who remains Brasil’s most popular politician, and leads all polling scenarios for October’s election in which he is present.