To his political adversaries and their supporters, former Brazilian President Luiz Inacia Lula da Silva is the chief of the biggest crime organisation in human history.

To them, da Silva is a criminal mastermind so sophisticated that his wrongdoing cannot be detected, even by the most valiant of investigators.

Always one step ahead, Lula leaves no trace of his riches, either in offshore accounts or in the luxuries you may expect to surround a massively popular two term head of the 5th most populous state on earth.

The beachfront “Triplex” apartment in Guaruja on the coast of São Paulo, which Operation Lava Jato prosecutors alleged, but could not prove, came to Lula in the form of a bribe from construction company OAS, after his time in office. It has, along with a charge of “indeterminate acts”, led him to receive a 12 year prison sentence.

Lula leads all polling scenarios for the October 2018 elections by a landslide margin, and 73% of Brazilians in a recent IPSOS poll believe his pursuit has been motivated by a desire of the powerful to keep him out of the Presidential race.

Globo’s Jornal Nacional has been covering the case of the “Triplex” since 2010, describing its “extensive reforms” in 2014, which in the Lava Jato case, were described as costing R$1.2 million, with R$320k for the kitchen alone. Judge Sergio Moro valued the property at over R$2 million, adding the cost of reforms to the asking price of R$800k. Moro used Globo’s reporting as “evidence” in the case. 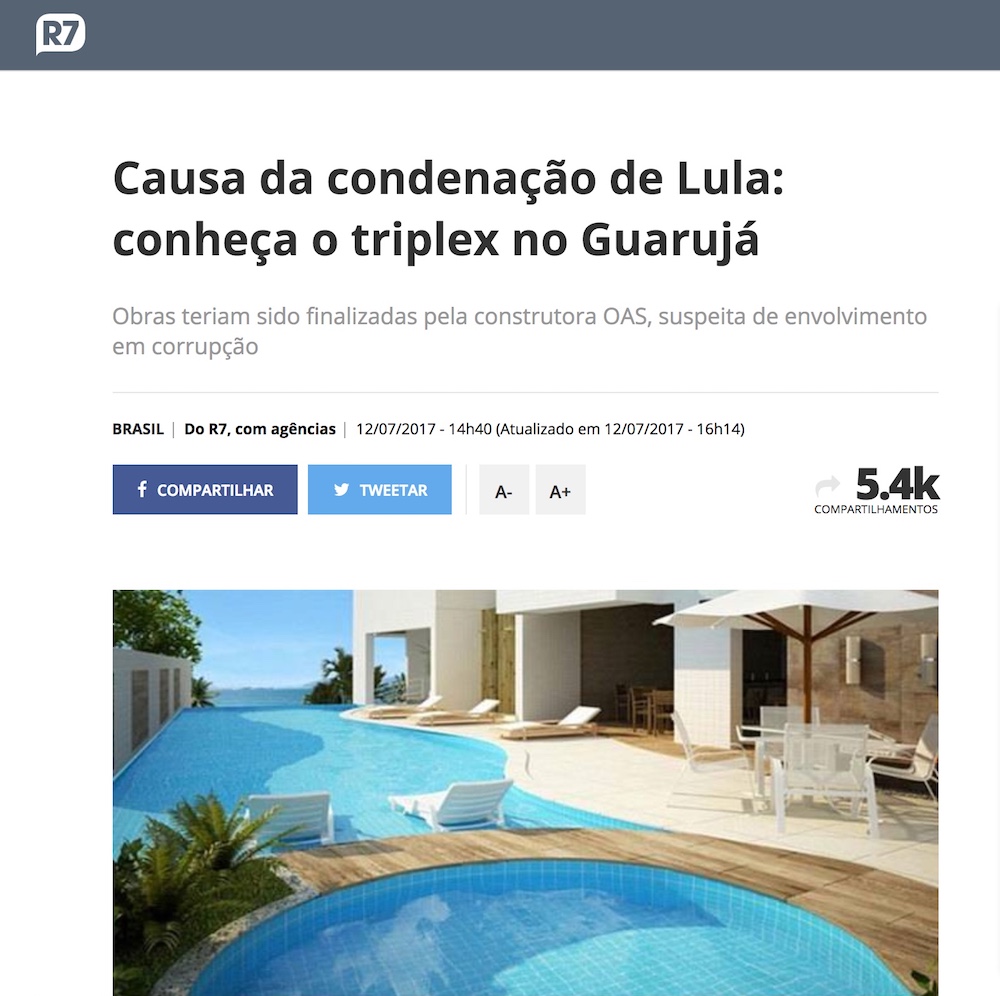 How news agency R7 reported on the “Triplex” in July 2017 following Lula’s conviction. The report and photos have since been taken offline.

The apartment itself has been shrouded in mystery, until a team of activists from the MTST homeless workers movement, and the Povo Sem Medo popular front to which they belong, successfully occupied the property insisting “If it belongs to Lula we can stay. if it doesn’t, why is he in jail?”. The demonstrators were later forced from the property under threat of jail by the Military Police. As Lula didn’t call for the occupiers of the apartment to be evicted, who did?

While inside, the MTST took video and photos of the apartment – scenes of unknown opulence in a property that has literally captured Brazil’s imagination, one that nobody can prove Lula ever owned.

“Inside the lair of Lula”. Images courtesy of MTST