On July 25th, Facebook announced that it was shutting down 196 pages connected to the Koch Brothers/Atlas Foundation supported Movimento Brasil Livre (Free Brazil Movement/MBL) a fake news organization disguised as a social movement that is also funded by the DEM party (which is rooted in the official dictatorship party, ARENA). Since the 2016 Coup, as deep austerity cuts sent 6 million Brazilians below the extreme poverty line of $1.90/day, the MBL has been spamming tea-party style monetarist economic dogma mixed with fascist tirades against gays, immigrants, Afro-Brazilians, public teachers, artists and “Communists”. Communist, to them, is any group that is not far right, from members of center-left political parties like the PT and PDT, to the conservative Globo TV Network. One of their leaders walks around gas-lighting non-violent protesters, surrounded by Nazi-skinhead bodyguards, filming for his YouTube vlog. Another, a Milos style, Afro-Brazilian gay city councilman, calls beneficiaries of affirmative action programs “worms” and likes to burst into public school classrooms surrounded by bodyguards and threaten teachers for citing Paulo Freire – the Brazilian educator who is currently the world’s third most frequently cited social scientist – instead of Margaret Thatcher.

One recent incident demonstrates how the MBL was able to quickly spread lies and slander across the social media networks. Immediately after Socialist Rio de Janeiro City Councilwoman Marielle Franco was assassinated in March, 2018, the MBL, working with former Dictatorship era military police officer and DEM Congressman Alberto Fraga, immediately disseminated a photo of a black woman sitting on the lap of a man with a machine gun in a favela, lying that it was a young Marielle, that she used to be married to a prominent drug trafficker and that her murder was payback for her criminal past. This unethical behavior led to a police investigation into the organization and Facebook’s pulling down one of its most popular  pages.

Brasil Wire published the first English language article linking the MBL to American corporate funded Libertarian think tanks, the Koch Brothers, and fake news in September, 2015. To their credit, some foreign correspondents began to mention this relationship when they wrote about the organization. We believe that by early 2016, every foreign correspondent working in Brazil knew or should have known that there were connections between the MBL and the American far right and that they were not a legitimate social movement but a fake news organization that received money from right wing political parties. Nevertheless, some journalists continued to publish articles that misrepresent them as a social movement and normalize their neofascist beliefs.

One Example is the BBC’s April, 2018 article entitled, Brazil’s Rising Tide of Young Conservatives Seeks Change, which came out after the MBL was already under investigation by the Rio de Janeiro Civil Police for committing criminal defamation against Marielle Franco and had one of its Facebook pages taken down for spreading fake news. After praising a woman named after English Fascist Sarah Winter, who has a “Nazi” Iron Cross tattoo over her heart, as a “snappy dresser”, the reporter notes her support for police summary executions and the chemical castration of rapists. The article then moves onto the “young conservatives” of the MBL, who get  550 words to promote their opinions without any challenge from the journalist. The article ends with a smiling image of Fernando Holiday, the man who threatens public school teachers, hates immigrants and calls affirmative action recipients “worms”, saying, “I think we bring a wider vision of what the right is. Not everything fits into a standard box and is determined by rigid rules.” 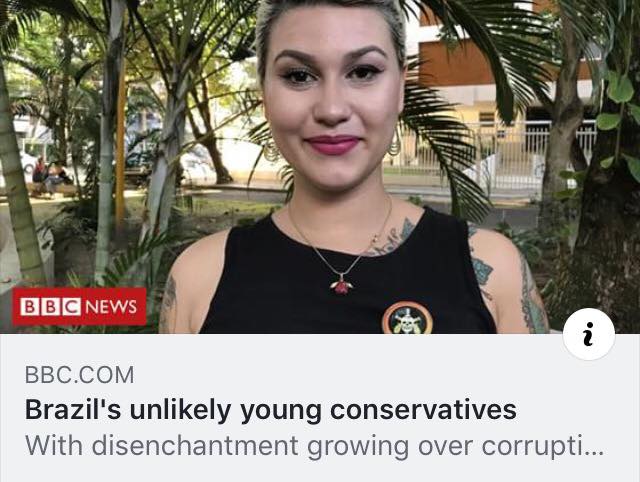 As the repercussions of Facebook’s action against the MBL resonate through the Brazilian media, the question remains why an organization like Facebook, which supported Trump during the 2016 elections would go after a group with which it would seemingly be aligned? Although the fight against fake news appears to be noble, one wonders if Facebook didn’t pick off an easy target – a group that is in decline due to infighting and not generally considered to be a factor in the 2018 presidential elections – so that it can censor legitimate progressive news organizations that are run by professional journalists without being accused of partisanship. Facebook also recently pulled down a factually accurate story from the progressive non-profit news magazine Fórum and was accused of political censorship for this in Congress. If these kinds of actions continue, Facebook, which influenced the illegal impeachment of Dilma Rousseff through organizations like the MBL and their dissemination of fake news on its network, could also prove to have a prejudicial effect on this year’s elections.