The British organization, GeneWatch, issued a warning to Brazilian officials about problems with the technology. The data comes from emails exchanged between health officials in the Cayman Islands and Oxitec, which produces the mosquitoes that have been released there and in four Brazilian cities.

São Paulo. A British watchdog group has issued a report that GMO mosquitoes released by Oxitec in cities of Jacobina and Juazeiro (Bahia), Piracicaba (São Paulo) and Juiz de Fora (Minas Gerais) with the promise of lowering the Aedes Aegypti mosquito populations which transmit the dengue, chikungunya and zika viruses do not work, are expensive and pose risks to the population’s health. The warning comes from the British observatory GeneWatch, which specializes in research, policies and actions involving genetically modified organisms. In an extensive report released in Brazil – Oxitec’s GMO Aedes Mosquitoes: do they Really Work? – the researchers inform managers, lawmakers, prosecutors, specialists and public health and environmental council members about the technology developed by the company, which is currently controlled by the North American biotechnology corporation Intrexon. Through the use of a legal mechanism to obtain information, researchers at GeneWatch obtained copies of emails exchanged between public health managers on the British Cayman Islands and employees of Oxitec, which also works in the archipelago.

The data collected conflicted with information publicized by the company on its official website and in public hearings including in the US Congress. GeneWatch also analyzed results from the very low number of published articles in respectable scientific journals, which present problems and inconsistencies. 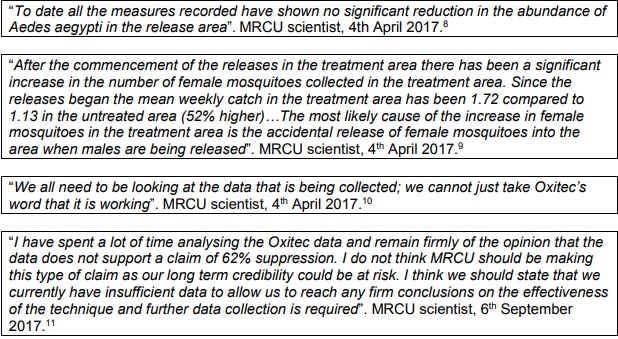 This is the case of articles referring to experiments conducted in the Itaberaba neighborhood in Juazeiro, where GMO Aedes mosquitoes were released in October, 2012. According to Oxitec, the reduction in the wild mosquito population there was around 96% but this was disproven by researchers and contested in scientific journals.

At 22 pages, the GeneWatch report also includes information which shows that the company is pressuring its clients. In the case of the Cayman Islands, there was a charge of $8 million USD for the release of GMO mosquitoes over a period of 3 years. Click here for a copy of the full report in English, and here for a copy of it in Portuguese.

This article originally appeared in Rede Brasil Atual, was translated with permission, and can be seen in its original Portuguese here.