Missing was leading candidate Lula da Silva, who is now 20 points ahead of nearest competitor, who has been controversially jailed while under appeal. In his absence, his vice/substitute Fernando Haddad, and running mate PCdoB’s Manuela D’Ávila, who will assume the vice position if Lula is prevented from running, are conducting the campaign, and were in the North East of Brasil addressing large crowds for the Lula/Haddad/Manuela ticket.

Globo made the startling, if not surprising editorial decision, not just to minimise the campaign of the leading candidate and his running mates, but to completely ignore it.

Globo’s Jornal Nacional is the main source of news for the vast majority of the Brazilian population. In the words Dictatorship-era Communications Minister and PFL founder Antonio Carlos Magalhães, “if it is not on Jornal Nacional, it did not happen”.

Rede Globo is politically conservative, and positionally against Lula and the Worker’s Party since its inception. The documentary Beyond Citizen Kane and above more recent film by Al Jazeera English are essential primers on Rede Globo and its power, historically and in the present day, including its key propaganda role in the Coup of 2016.

Earlier in the week, and through gritted teeth, Jornal Nacional’s William Bonner had to announce the latest poll numbers with Lula’s lead growing.

CNT and Ibope had Lula on 37% in polls released on Monday 19th August, while industry leader DataFolha had him on 39% two days later, a clear 20% ahead of extreme-right Jair Bolsonaro, and on the brink of a first round election victory. 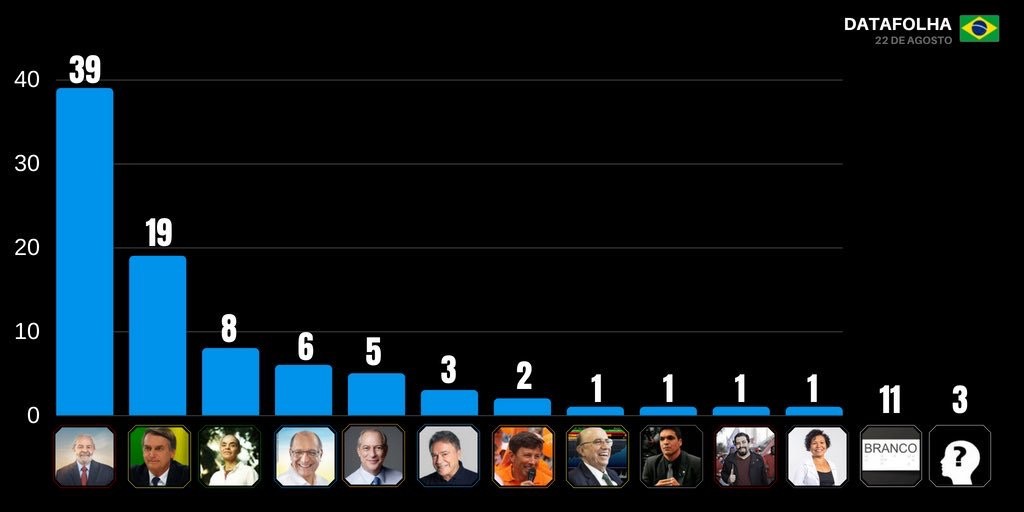 Globo’s erasure of the entire Workers Party candidacy is an extraordinary abuse of power, yet one that will surprise few Brazilians.

Globo’s editorial decision reflects a growing hysteria amongst Brazilian elites about Lula’s enduring popularity, and the possibility that even if they prevent him taking office, Haddad and Manuela will assume the Presidency on a progressive platform, and implement the same Keynesian/developmentalist, redistributionary programme – policies which the Brazilian electorate has chosen for 4 successive elections. It is anticipated that any candidate that Lula publicly endorses will receive the majority of his voters, and a 20% popularity spike.

Sections of Anglo corporate media have followed Globo and persisted with the narrative that Lula “could not run” even after the successful registration of his candidacy on August 15, many even falsely describing Jair Bolsonaro as the “front runner”, also erasing Lula’s candidacy, as Reuters did in this wire.

Following the UN Human Rights Commission instruction to the Brazilian Government that he must be able to run for President, and have access to his Party and the media, as a signatory of the International Treaty on Civil and Political Rights and its UN Optional Protocols, if Lula da Silva’s candidacy is barred now it will be in violation of Brazilian Law according to MP 311 of 2009 which mandates UNHRC decisions as legally binding.