The CUT has always been on the streets. We fought against the dictatorship, against the famine and are fighting against the Coup, which the media erroneously calls an impeachment. – Vagner Freitas

August 28, 1983. Military dictatorship in Brazil. The nation was embroiled in an economic and political crisis. Inflation hit 150% per year, the foreign debt reached $100 billion and unemployment and hunger grew as salaries lost more and more purchasing power.

It was in this context that over 5 thousand working class men and women from across Brazil met in a warehouse of the extinct Vera Cruz movie company in São Bernardo do Campo, in São Paulo’s ABC region. There, based on shared values of equality and solidarity, they founded the Unified Workers Central Union Federation (CUT), which is currently the largest union federation in Latin America and the world’s 5th largest.

The plan approved by CUT at the first CONCLAT/National Working Class Conference was to fight for an end to the National Security Law and the Military Dictatorship, to fight the government’s political economy, to end unemployment, and to defend agrarian reform built by the workers, quarterly salary adjustments, union freedom and autonomy.

As it has since 2016, on this Tuesday, August 28th, 35 years since its founding, the CUT faced a State of Exception and fight against an ongoing coup which removed a legitimately elected president from office, Dilma Rousseff, and has held the greatest popular leader in Brazilian history, Luiz Inácio Lula da Silva, as a political prisoner for over 4 months.

On the historic day of CUT’s 35th anniversary, President Wagner Freitas spoke about its history and relevance to the fight against the coup.

“We were born out of the confrontation which helped defeat the Military Dictatorship and started the re-democratization process in this country. We built so much since then that the current coup, instead of destroying, further strengthened the Unified Workers Central, which has been at the forefront of all of the confrontations against the golpista’s attacks on social and labor rights.

“With 3980 affiliated unions, 7.9 million associated workers and a base support of 25.8 million people across Brazil, the CUT continues to be very important because it is an institution that was born out of the fight for the defense of democracy. There cannot be democracy in Brazil without the CUT and its unions guaranteeing that the working class are heard and respected. The CUT has never stopped defending the interests of the working class- this has been our historic commitment since our founding. Despite all that the golpistas have been doing since 2016 to destroy union structure and organization in this country, they have not succeeded and will not succeed in silencing our voices or impeding our struggle. 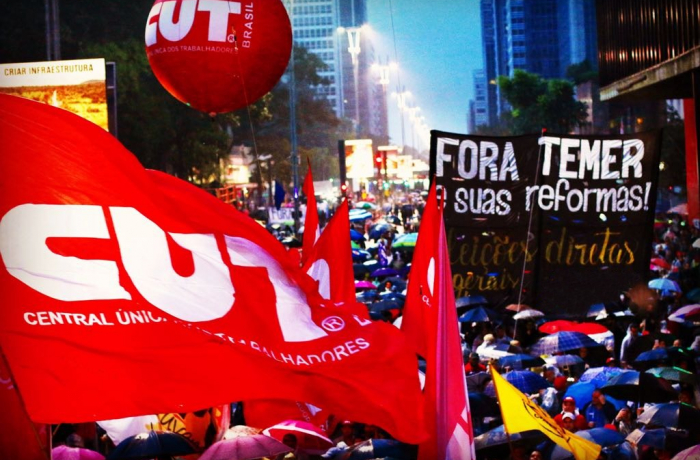 “The Brazilian people and the international community witnessed the CUT and its unions’ capacity to organize, mobilize and resist both before and after the coup.

“The CUT has always been on the streets. We fought against the dictatorship, against the famine and are fighting against the Coup, which the media erroneously calls an impeachment. It was not an impeachment because there was no proven crime of responsibility. On the streets, we built the biggest general strike in the history of the nation against retirement reform, on April 28th, 2017, when a general strike called by CUT and the other labor union federations paralyzed the country and mobilized 48 million workers. On that day cities across Brazil started the morning without any movement at all. Brazil froze. We are fighting the austerity reforms and the setbacks that are taking away rights from the working class on the streets and in the workplace. On the streets we defend public companies and banks and denounce the dismantling of social programs. On the streets we’ve fought and continue to fight against all types of injustice. On the streets we are defending the right for a worker to run for the Presidency of the Republic.

“October 7th, the day of the first round of the 2018 elections, is an important day for the working class to occupy the streets and write another chapter in Brazilian history. It is a moment in which we will be on the streets defending democracy during this, the most important election of our lives. It is an opportunity which we will have to recuperate the legal democracy in our country and elect Lula, who the Brazilian people believe is the best president in the history of the country.”

This article was translated from the Portuguese by Brasil Wire and can be read in its original form here.