August 17th 2018 – The United Nations Human Rights Commission officially requested the Brazilian government to allow Luiz Inácio Lula da Silva, 2018 presidential front-runner, to run for President and access the media and all members of his political party while being kept as prisoner. The decision reflects a growing concern in the international community that Lula is a political prisoner in Brazil. Brazil is a signatory of the UN’s First Optional Protocol, which means that it has committed to abide by UN Human Rights Commission rulings. 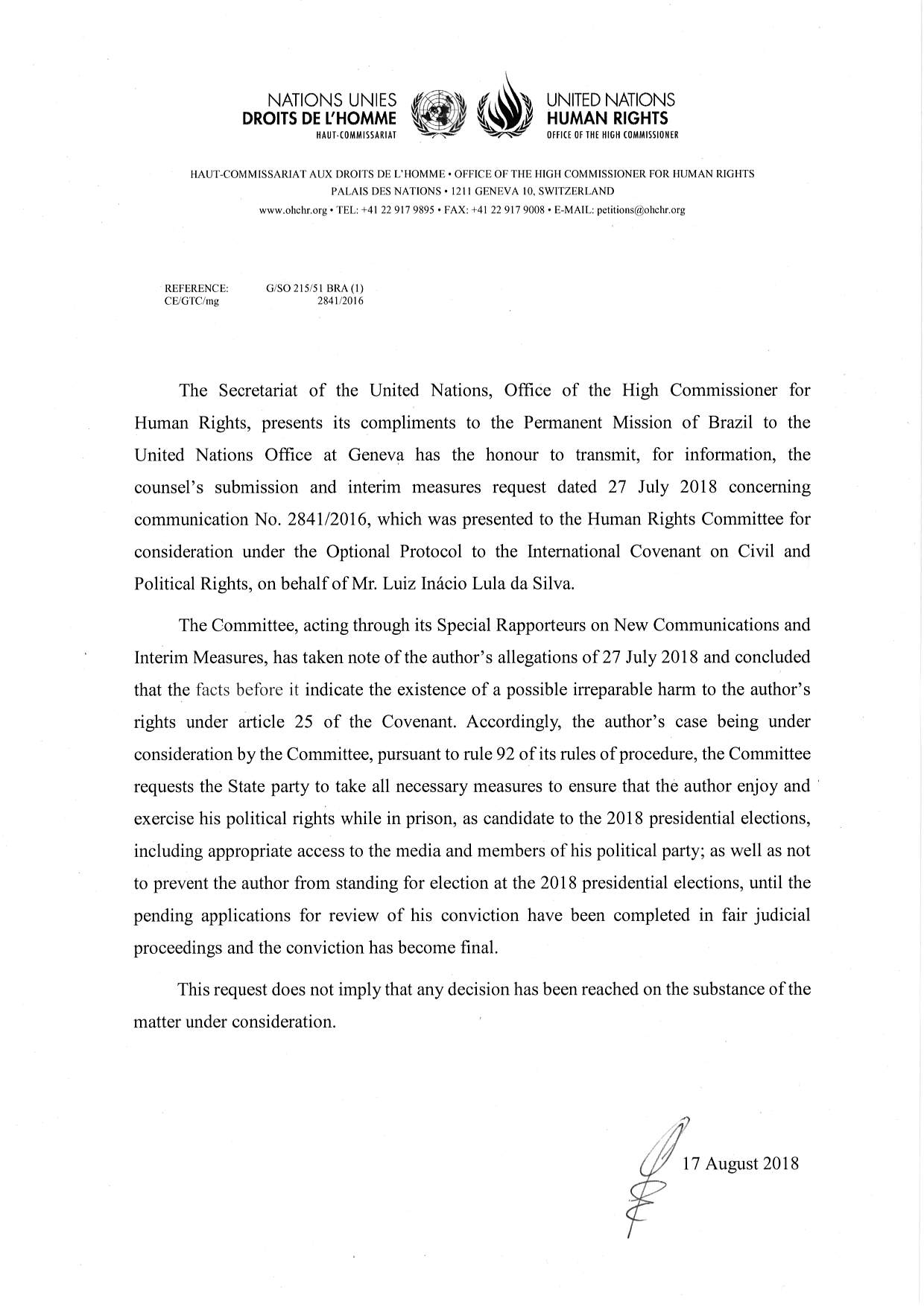 Since Lula was arrested for committing “indeterminate acts”, in April, a local court has denied his right to meet with the press and give interviews from prison, a right which is regularly granted to people accused of more serious offenses in Brazil, such as murderers and drug trafficking kingpins.

Labor unions, public intellectuals and political leaders from around the world complain that Lula is the victim of judicial farce to prevent him from running for office. This week, Lula was formally registered as a candidate. Hours later several legal actions were filed, including two by people connected to the fake news organization MBL which recently had nearly 200 associated pages pulled off of Facebook, to bar his candidacy.

While northern newspapers continue to depict Lula‘s imprisonment as an advancement in the fight against corruption, the fact is that, unlike the case of many of his accusers – including Judge Sergio Moro, who illegally tapped defense lawyers’ telephones – there is no material evidence linking him with any crime. On the contrary, after years of full-scale investigation and constant leaks to the media the prosecutor-judge, who was allowed to rule over his own investigation with no jury, was unable to clearly define the crime that Lula allegedly committed.

Supporters of sovereignty and democracy in Latin America hope that this decision by the UN will help convince those among Lula’s political adversaries who consider themselves to be human rights supporters to listen to reason. International figures demanding Lula’s immediate release and right to run for office include: Bernie Sanders, Tariq Ali, Noam Chomsky, Angela Davis, Thomas Piketty, Boaventura de Sousa Santos and Slavoj Žižek. Organized labor organizations demanding Lula’s immediate release include the AFL-CIO, the International Trade Union Confederation and COSATU. Among those who believe Lula should remain behind bars are journalists associated with think tanks that work for US corporate interests in Latin America like AS/COA and the Heritage Foundation, and the news mediums which regularly run content provided or influenced by these institutions.

Letter from the Jurists of the World
http://bit.ly/juristascomlula
Renowned legal scholars from around the world denounce Lula’s “trial of exception”

Election Without Lula Is Fraud
Change.org/lula
Denounces the farce that “institutions are functioning normally”