At a moment in which history puts us to the test we ask: what side are you on? What would we do with our lives if we didn’t march and fight for a better world for everyone?

On August 10th, thousands of members of the Landless Rural Workers Movement from all 26 Brazilian states began a 5 day march to Brasilia in three columns, leaving from different parts of the outer Federal District. Tomorrow, on August 15th, they will join the 7 hunger strikers, an expected 15,000 CUT union federation members, Nobel Peace Prize Laureate Peréz Esquivel, leaders from international union federations such as the AFL-CIO and countless thousands of other Brazilians to surround the Supreme Electoral Court at the moment the PT enters the building to register Lula’s candidacy for the presidency. In this official communique by the MST, translated by Brasil Wire, they explain why they are marching. 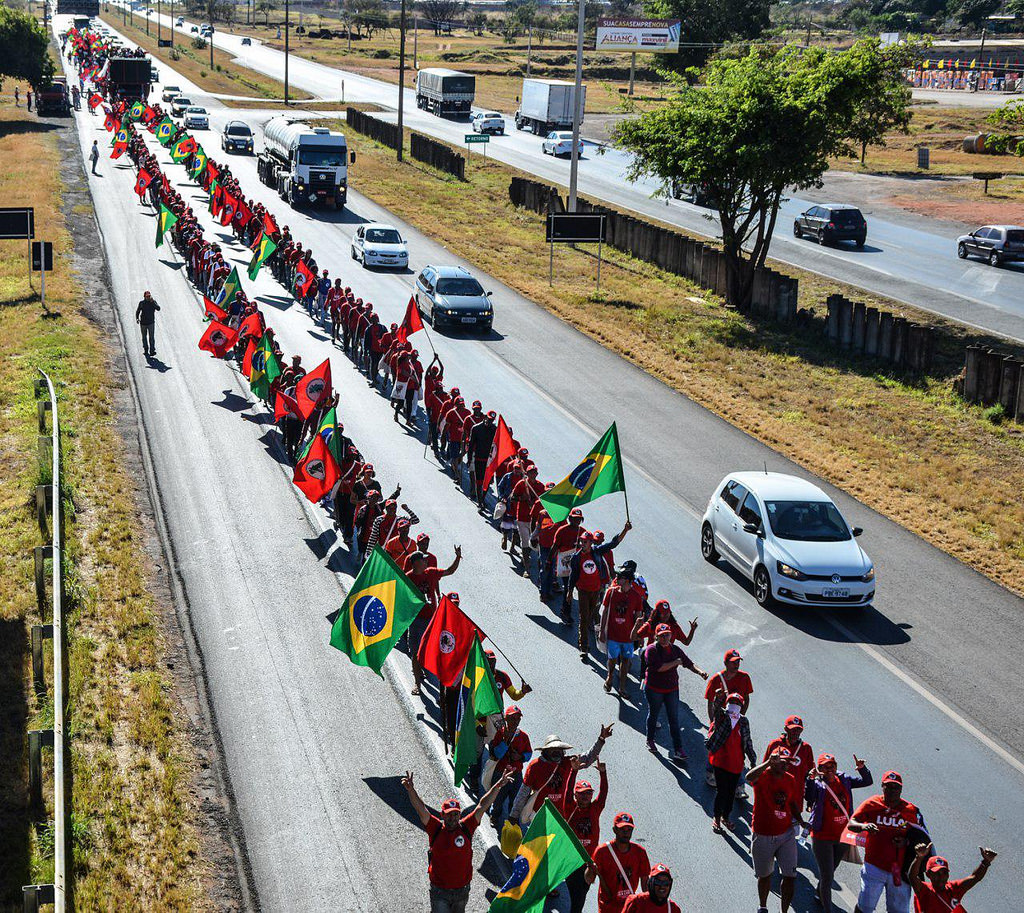 What would we do with our lives if we didn’t fight for a better world for everyone?

There are moments in history when paths appear indeterminable. If we think about how moments like this will never fade with time, they are.

During its history the MST has make big steps towards building a new society. There have been many steps and more will be made, but they can’t happen without the current march. We are not marching for ourselves but for those who the poets have already announced. We are marching for those who will still come!

The Brazilian people were brutally hit by a historically privileged elite. Today, after having had the experience of a dignified life, or perhaps only one that was less unequal, we are forced, once again, to submit to the interests of small groups who live at the expense of the people, “lying forever in their splendid cradles”. We, the Brazilian people, do not care about a few people’s bonanza. We want to feed millions.

During the last few days we have seen the strength and courage of the working class which, understanding the complex set of interests prevailing at this juncture, has engaged in a permanent struggle against the elites. The Caravan of the Semi-Arid against Hunger, the August 10th protest against the withdrawal of workers’ rights, the immense love for the people shown by our comrades who put their lives at risk in the Hunger Strike for the reestablishment of democracy expressed in the freedom of comrade Lula, and the National March carried out by the MST towards Brasilia are all signs that the population does not accept the Coup’s conservative agenda.

Despite the efforts of the golpista media in dismantling the economic and social legacy of ex-President Lula’s governments, the polls show that the majority of the Brazilian public prefer a Lula presidency over all others.

Why has this happened? The fact is that, under Lula, for the first time in history the Brazilian people had equal access the same basic human rights. Capitalist society tends to arouse interest in rights at the same time that it denies their access. That which, in Brazil, smelled like communism to a lot of opportunists was only a small step forwards in capitalist relations.

Therefore we should not have any illusions. Lula’s arrest is political and this is proven by the lack of evidence in the trial that convicted him. Lula is in prison because the people want him as president while the elite want to keep the policies of the coup-plotter Temer’s people-less government.

What can this be if it is not the most obvious expression of class struggle? “Free Lula” is the battle cry that mobilizes us, because in a democratic nation we should never accept the political imprisonment of any political agent or citizen. The struggles that are exploding in Brazil are proof that there is no longer a belief in corrupt institutionalism. A sovereign and free people never opt for a conflict that can martyr it, but the enemies of the people are those responsible for the end of the democratic pact of 1988. We have to fight and resist, step by step, with solidarity and rigor, until victory.

Three columns of landless rural workers are marching to Brasilia: the Prestes Column, from the Southeastern and Southern states; The Tereza of Benguela Column, from the Midwest and the Amazon, and the Peasants Leagues Column from the northeast.

These people are rural workers who have occupied land in Agrarian Reform settlements who left their homes and their work to fight for the greater good – not for private interests but for the rights of all workers.

Sandra Maria is one of these people. In 2000 she was invited to teach elementary school in an MST agrarian reform settlement in Serra Talhada in the Pernambuco back country, and since then Sandra has been part of the movement. Now she is studying Social Sciences through PRONERA (the National Agrarian Reform Education Program) at the Universidade Federal do Rio Grande do Norte. Sandra says, “the march is a moment of dialog between society and the movement base. This serves to feed and strengthen our certainty about what we want.” For Sandra, the march will not end when it arrives in Brasilia. In fact, it is a process which began long before the march started. “We marchers are participating in a big collective action, during which we can experience all of the MST’s values in practice”, she says.

Adailton Cardoso is another marcher. In 1995 he joined 2,204 families in the Safra Agrarian Reform settlement camp in Santa Maria da Boa Vista in Pernambuco. Since then, Adailton has become a teacher, contributed to the MST education group for five years and is now one of the settlement’s leaders.

He says, “Of all the members of Brazilian society today, it is the social movements that have the capacity to mobilize and to become angry with any injustice. We are marching because we do not agree with the injustice committed against former president Lula. Comrade Lula transformed the lives of many people. We are marching to defend the rights of the workers.”

There are many states, towns and accents mixing together in the march’s culture. We are all workers who, in the strongest demonstration of solidarity, continue firmly in the struggle for a more just life, a life that is more beautiful to live, freer and more human.

At a moment in which history puts us to the test we ask: what side are you on? What would we do with our lives if we hadn’t marched and fought for a better world for everyone?