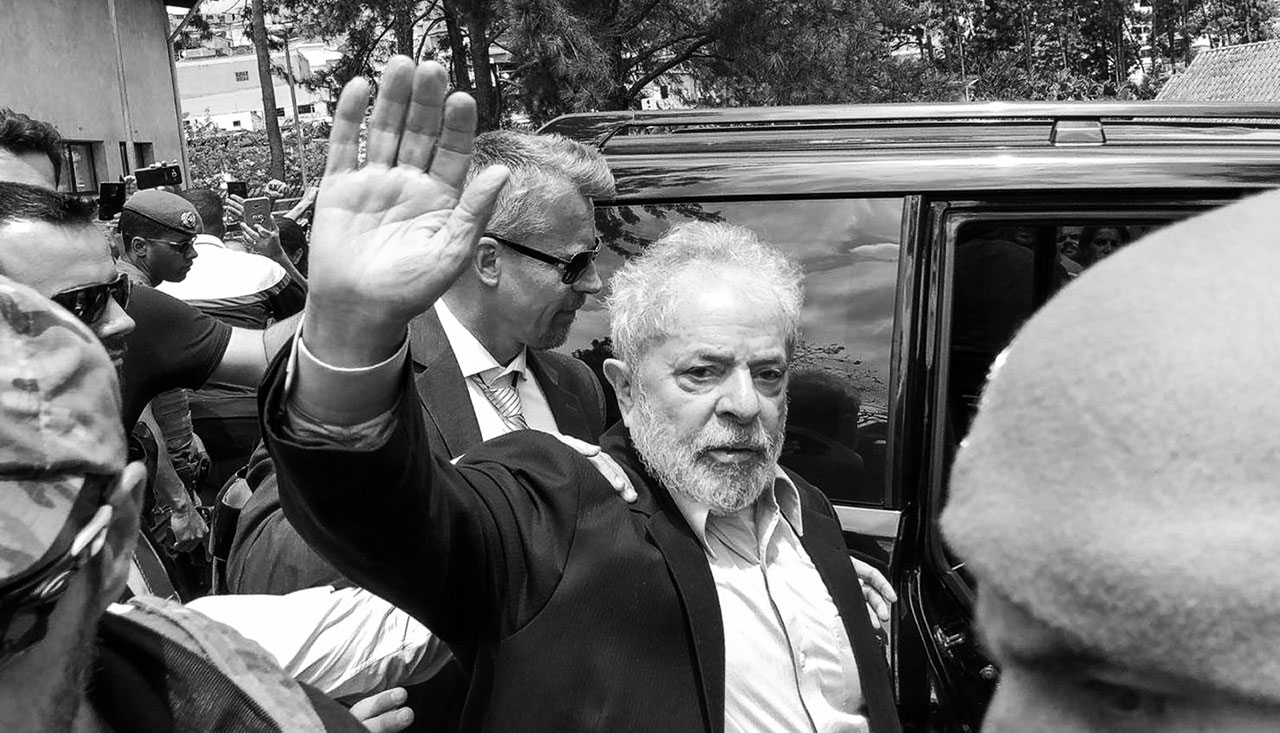 Why is there so much fear of a free Lula?

After one year of solitary confinement, former President Lula is allowed to write his first Op Ed, for newspaper Folha de São Paulo.

It has been one year since I was unjustly imprisoned, accused and convicted for a crime that never existed. Every day that I spend here increases my indignation, but I continue to have faith in a fair judgment and that the truth will prevail. I can sleep with the clear conscience of my innocence. I doubt that the people who convicted me in a judicial farce are sleeping well. What gives me anguish, however, is what is happening in Brazil and the suffering of our people.

In order to impose a judgment of exception, they overstepped the limits of the law and the Constitution and weakened Democracy. They continue to revoke the people’s rights and citizenship as they impose a weakening of salaries, precarization of the job market and rising cost of living. They have handed over national sovereignty, our natural resources, our companies and even our territory to satisfy foreign interests.

Today it is clear that my conviction was part of a political movement which started after the reelection of President Dilma Rousseff in 2014. Beaten at the ballot box for the fourth consecutive time, the opposition chose the road to a coup to return to power, restarting the authoritarian addiction of the dominant Brazilian classes.

The coup of impeachment without a crime of responsibility was enacted against the model of development with social inclusion which the country had been building since 2003. In 12 years, we created 20 million new jobs, lifted 32 million people out of extreme poverty, and increased the GDP five-fold. We opened universities to millions of the excluded and overcame hunger.

That model was unacceptable to a privileged and prejudiced layer of society. There were powerful economic interests from outside of Brazil. While the pre-salt petroleum reserves drew the greed of the foreign petroleum corporations, Brazilian companies began to compete for markets with traditional exporters from other countries.

The impeachment was held to bring back neoliberalism in an even more radical form. To do so, they sabotaged the Rousseff government’s efforts to confront the economic crisis and correct its own mistakes. They drowned the country in a fiscal collapse and a recession that still lasts. They promised that all they had to do was to get the PT out of government and that all the Brazil’s problems would end.

The people immediately discovered that they had been tricked. Unemployment increased, the social programs were gutted and schools and hospitals lost funding. A suicidal policy imposed on Petrobras transformed the price of cooking gas out of reach for the poor and led to a national paralyzation by the truck drivers. Now they want to end retirement pensions for the elderly and for rural workers.

During the bus trips I made across the country, I saw hope in the eyes of our people and their wish to restart that model which started to correct the inequalities and give opportunities to those who never had them. And in early 2018 the polls showed that I would win the elections in the first round.

They had to stop my candidacy at any cost. Operation Car Wash, which had been the backdrop during the impeachment coup, bowled over deadlines and prerogatives of the defense to convict me before the elections. They illegally recorded my phone conversations and those of my lawyers and even those of the President of the Republic. I was the target of illegal coercive conduct, of veritable kidnapping. They ripped up my house, cut into my mattress and confiscated cellphones and tablets – even those of my grandchildren.

The didn’t find anything to incriminate me: not even conversations with crooks, suitcases full of money or offshore bank accounts. Despite this, I was convicted in record time by Sergio Moro and the 4th Regional Federal Court, for “undetermined acts” without finding any connection between the apartment that was never mine and supposed embezzlement from Petrobras. The Federal Supreme Court denied a legitimate request for habeas corpus, under pressure from the media, the markets and even the armed forces, as Jair Bolsonaro – the largest beneficiary of that persecution – recently confirmed.

My candidacy was barred in violation of electoral law, jurisprudence and an order to preserve my political rights made by the UN Human Rights Committee. Even so our candidate Fernando Haddad had an expressive number of votes and was only defeated by an industry of lies conducted by Bolsonaro on the social media that was funded by an illegal slush fund of foreign money, according to the press.

The most renowned legal scholars in Brazil and in other countries consider my conviction to be absurd and point out the partiality of Sergio Moro, which was confirmed in practice when he accepted the position of Justice Minister for the president who he helped elect through my conviction. All that I want is for them to show one piece of proof against me.

Why is there so much fear of a free Lula, if they have already achieved the goal of blocking my election; if there is nothing to sustain this imprisonment? The truth is what they are afraid of is the organization of the people who identify with our national project. They are afraid that they will have to recognize the arbitrary actions that they committed to elect an incapable president who fills us with shame.

They know that my freedom is an important part of the return to democracy in Brazil, but they are incapable of coexisting with a democratic process.