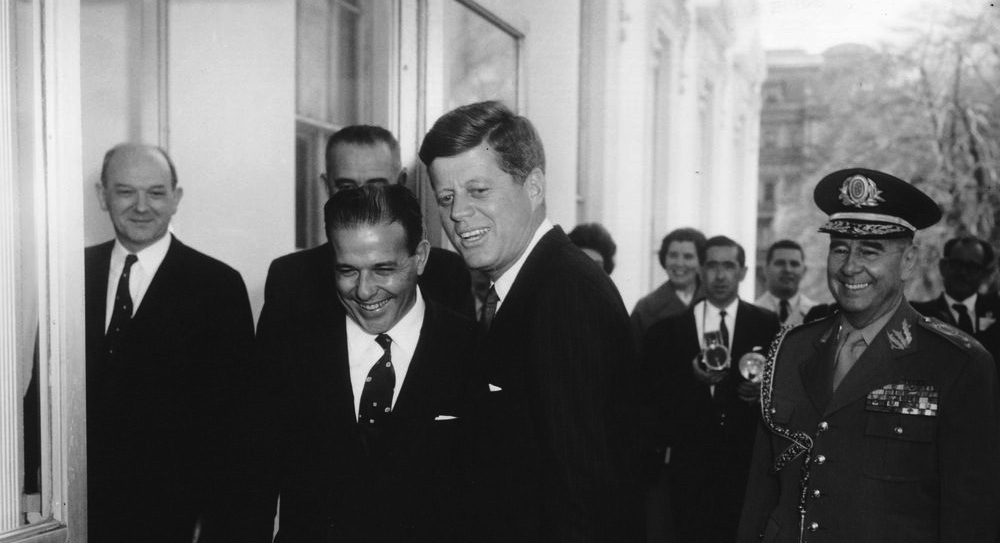 In her 1977 book “United States Penetration of Brazil“, former CIA researcher, Professor Jan K Black exposed the complex role the US had played in Brazil’s 1964 coup and its governance since.

This extremely detailed forensic investigation should be a standard reference for anyone studying the 1964 coup, the dictatorship period and relations between the countries, both then, and in the present day.

Decades later Black wrote about what she found was still relevant and this resulting epilogue was for the Brazilian Portuguese edition, published in 2009. Professor Black has been an inspiration, a great help, and tremendous source of knowledge during the creation and establishment of Brasil Wire.

We are honoured to publish her epilogue in English for the first time.

My love affair with Brazil began with a visit to Rio de Janeiro for Carnaval in February and March, 1964. On that trip, a vacation from Peace Corps service in Chile, I also visited the new capital, Brasilia, still a virtual ghost town as diplomats and parliamentarians resisted resettling from Rio, the most beautiful and vibrant city in the world, to what then seemed an imposing but sterile sculpture park in the dusty hinterland. President Joao (Jango) Goulart was away at the time, but his administrative assistant, whom I had met on the plane en route from Rio, offered to show me the president’s private office. There I was amazed to see, confronting each other from opposite walls, life-sized portraits of US President John F. Kennedy and Soviet leader Nikita Khrushchev. I sensed then that Goulart was a man on a tightrope. The precariousness of his position became ever more apparent over the next couple of weeks, as my Brazilian friends urged me to stick around for the coup.

The coup, which indeed got underway on March 31 of 1964, was revisited by a plenary panel on the significance of that event and the militocracy that ensued at the international conference of the Brazilian Studies Association (BRASA) in Rio de Janeiro in June of 2004. I was invited for that occasion to reflect on the undertaking that was to be my dissertation and my first single-authored book, United States Penetration of Brazil, published by the University of Pennsylvania Press in 1977. It occurred to me that readers of the Portuguese edition might also be interested in the thoughts I shared then as to why and how I had written that book, what difference it had made, and, most important, what I had learned in the process that was still relevant – or relevant again – in 2004.

Why Did I Write the Book?

Back in Chile at the end of March, 1964, I received a frantic call from my new friend, Goulart’s assistant, as the coup got underway, but I never heard from him again. I hope he was able to escape unharmed. I wondered then and later why my American friends so readily discounted what my Chilean friends took for granted – that the United States was somehow complicit in that awful assault on Brazilian democracy.

When I left Chile it was with the intention of getting professional training in community development so that I might return better able to make myself useful (My undergraduate degree was in commercial art). But my Chilean friends, from the poblaciones callampas to the barrio alto, said “Forget about ‘development;’ we can handle that ourselves. Just get the U.S. government off our backs.” That plea must have registered with me, because United States Penetration of Brazil is not so much about Brazil as about what Americans, North and South, need to know in order to get the U.S. government off the backs of Latin Americans.

After the Peace Corps experience and a year of studying and teaching in a shipboard university program now called Semester-at-Sea, I settled in Washington, D.C., where I could nurse my reverse culture shock along with other returned Peace Corps Volunteers. There I worked on a Master’s Degree at American University’s School of International Service. My plans about returning to Chile were interrupted by marriage to a young lawyer-politician on the U.S. Senate staff; so I was lured back into a PhD program at American University and into a full-time position as political analyst in the university’s Foreign Area Studies Division. There I co-authored, and later edited, books on Latin America in a series known then as the Army Area Handbooks.

The Army itself turned out to be surprisingly inattentive to the tenor of our analyses, but in 1968 a beleaguered Johnson Administration put out an edict to the effect that all government foreign affairs research was to be vetted by the Department of State. Such vetting became more heavy-handed under the Nixon regime. In 1969, a couple of chapters I had prepared from unclassified sources for a book on Brazil, chapters that dealt straightforwardly with purges and executions, torture and death squads, were returned from “across the river” – code for CIA headquarters in Langley, Virginia – virtually dripping red ink. My research team supervisor, a retired foreign service officer, called me into his office. Pounding his fist on the desk, he called me a hippie and a pamphleteer and threatened to fire me if I did not rewrite the chapters line by line. My simple response was, “So, fire me.” (That moment marked the beginning of a power shift in the research organization, one that allowed my experience there to be empowering; but that’s another story.)

I did not rewrite and I was not fired, but what I had learned in no uncertain terms – apart from the fact that bullies sometimes back off when you stand up to them — was that the U.S. government had a great deal to hide with respect to its dealings with Brazil. Knowing that much meant knowing also that I had to know more, and that I had to make sure others knew, too. That I was obliged to write about the Brazilian counterrevolution and the U.S role in it was reinforced by the fears I laid out in 1970 in my dissertation proposal that Chile and Uruguay were in danger of suffering a similar fate.

More surprising to me than U.S. complicity in the demise of Brazilian democracy was the discovery that the study I had in mind had not already been done, given the clues that abounded and the enormous significance of such a turn of events. The times were of course inauspicious. A heavy fog of McCarthyism still hung over the capitol. Even so, the risk I understood from the start of being forever virtually blackballed from academia – never mind government – came to seem insignificant compared to the risks assumed by my Brazilian counterparts. I had never before – and have not since – been more clear in my own mind that I was doing what I had to do. I believed at the time that if the American people only knew of the atrocities being committed in their names and with their tax dollars they surely would not allow them to go on.

Given that the dissertation topic I had chosen was generally considered both far-fetched and downright subversive, the kind of support I received from my professors at American University was remarkable. I was particularly fortunate to be able to work with Ted Couloumbis, who had examined U.S relations with Greece’s military junta, and with Brady Tyson, who had worked in Brazil on behalf of the Methodist Church and, in the period following the coup, had made himself a cherished friend of the Brazilian people and a persona non grata of the military government.