On January 24, a team of three conservative judges will decide on ex-president Lula’s appeal against a 9.5 year sentence for allegedly receiving illegal reforms to a penthouse apartment in Guaruja, São Paulo, which prosecutors were unable to prove he ever owned or set foot in. The fact that there is no physical evidence implicating Lula led Mark Weisbrot, writing in the New York Times, to label the process as a kangaroo court proceeding. A growing number of international intellectuals, activists and political leaders – from Noam Chomsky to a group of 12 US Congressmen –  have spoken up, complaining about the obvious fact that this proceding appears to be designed to prevent front runner Lula from running for president this year. As hundreds of thousands of supporters of Lula mobilize across Brazil to take to the streets in solidarity on the 24th, CUT labor union federation journalist Solange do Espirito Santo writes about the arrival of UN Human Rights Commission laywer Geoffrey Robertson in Porto Alegre to monitor the procedings. The article can be read in its original Portuguese here.

By Solange do Espirito Santo

This Wednesday, January 24th, Geoffrey Robertson, the British lawyer from the UN Human Rights Commission will be in the room at the 8th Federal Court in the 4th Region (TRF-4) where ex-president Lula’s appeal will be judged.

Robertson- who is also counsel to the Queen of England and Professor at Queen Mary University of London – was authorized to attend the session last Friday (January 19th) by Judge Leandro Palsen, answering a petition made by Lula’s defense team.

This Wednesday, three judges of the 8th court team will judge Lula’s appeal against the inappropriate condemnation imposed by Sergio Moro, judge of the 13th Federal District of Curitiba, in the case of the triplex apartment in Guaruja.

For the legal experts Jose Carlos Moreira and Tania Mandarino, the presence of Robertson at the judgment of the TRF-4 is important, not only as an observer, but because he represents the international legal community.

“Geoffrey is a symbol in the fight against the actions of States that violate individuals rights guarantees and represents international interest in ex-president Lula’s case,” says Moreira, a Law Professor at Pontifica Universidade Catolica do Rio Grande do Sul.

“The international legal community is rallying against this aberration of justice against ex-president Lula. The presence of Robertson in the TR-4 brings very important symbolism to the proceedings: under the international magnifying glass, the UN jurist will put the Brazilian judiciary on the defensive,” says Tania Mandarino, from the Lawyers for Democracy Collective, in Curitiba.

Jose Carlos Moreira also mentions Lula’s protaganism on the World stage and the attention that this legal process is getting internationally. “We are not talking about a common person in this judgment, but a key actor on the World state who was recognized as a global alternative in fighting against inequality and for a better quality of life for the poor.”

The two legal scholars emphasize that the legal process that culminated in Sergio Moro’s sentencing of Lula is completely devoid of material evidence.

“The entire process against Lula is flawed. There is no proof and his condemnation would represent a Coup within the Coup,” says Tania, referring to the coup that deposed Dilma Rousseff from the presidency in 2016.

Professor Jose Carlos says, “in order to condemn anybody, and, in this case, someone with the prominence of the ex-president, at the least the case has to be based on solid evidence. This is what is missing from this judgment”.

Why the case ended up at the UN Human Rights Commission

Lula’s defense lawyers decided to appeal to the UN Human Rights C omission in Geneva (Switzerland) in May 2016, after the Brazilian Federal Supreme Court refused to analyze proof of violations of fundamental human rights perpetrated by Judge Sergio Moro.  In the suit, the ex-president’s lawyers, accompanied by Geoffrey Robertson, requested that the Human Rights Commission opine on the accusations that Moro violated Lula’s right to privacy, his right to not be arbitrarily arrested and his right to the presumption of innocence until proven guilty.

As proof of abusive practices by Moro and the Parana prosecutors, they presented:

1) Coercive conduct against Lula on March 4, 2016, in complete violation of Brazilian law.

2) The leaking of confidential data to the press.

3) The leaking of illegally obtained phone conversation recordings to the press.

4) An abusive strategy of temporary and preemptive imprisonments in order to obtain plea-bargaining deals implicating the former president.

The case is still under analysis by the UN Human Rights Commission. 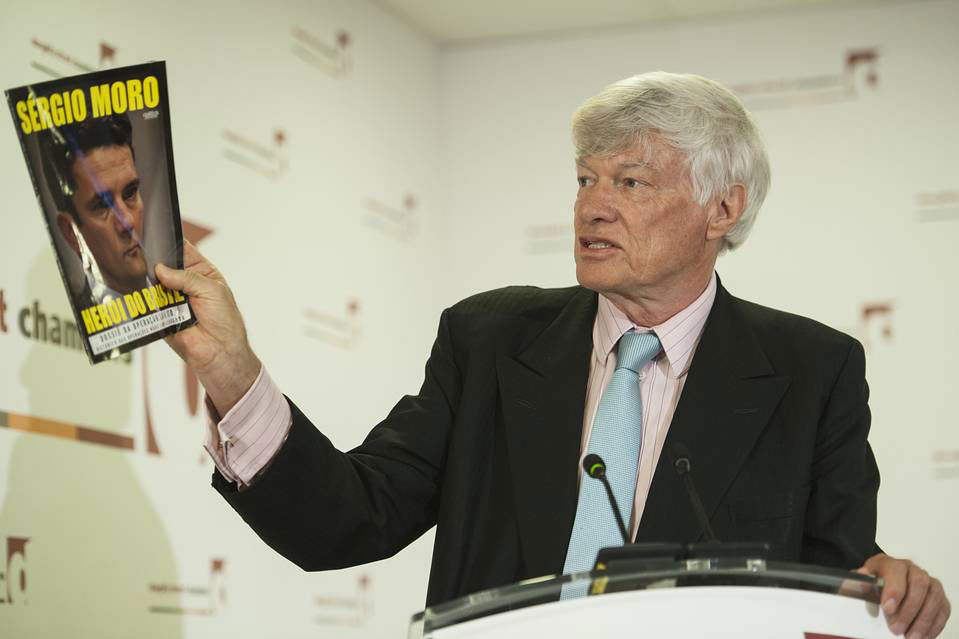