As Brazil’s Neofascist President Jair Bolsonaro and his Justice and Security Minister Sérgio Moro address the World Economic Forum at Davos, on the fight against corruption and need for unrestricted foreign investment in Brazil, the clock is already ticking for his administration and his Presidency.

“They can label me anything, homophobic, racist….they just can’t call me corrupt” – Jair Bolsonaro.

In a matter of weeks Brazil has been transformed into a pariah state, US Viceroyalty and an international joke. “Eu Avisei!” (I told you so!), is the chorus that greets every new scandal that hits Bolsonaro’s beleaguered new Government, and his would-be political dynasty. Connection to allegations of money laundering, illicit finance, and links to organised crime gangs so early in his Presidency is proving catastrophic for the already difficult public image of a former Army Captain elected on spurious anti-corruption rhetoric. His party PSL has descended into infighting and chaos, whilst the number of Military personnel in that Government increases daily, now occupying 21 areas of policy.

As of today, with Bolsonaro at Davos, his vice General Mourão is President of the Brazilian Republic, and has alleged permanent ambitions for the top position. He has already begun to contradict on policy and undermine the authority of Government figures, such as Foreign Minister Ernesto Araújo. Mourão is insisting that the so called Bolsogate scandal has “nothing to do with the Government”. Efforts to ring-fence the scandal around Jair’s son, Senator Flavio Bolsonaro, are failing to prevent its spread, and half of the President’s brand new cabinet are under their own investigations for corruption.

New Justice and Security Minister Sérgio Moro, whose prosecution of Lula effectively delivered Bolsonaro the Presidency, has refused to comment to the media on the corruption scandal enveloping the family, yet the method used to invisibly launder money using many small transactions, was even described in his own book, published in 2010. “Brazil’s institutions are working”, Moro said, repeating the mantra-like talking point of 2015/16, when dozens of foreign journalists unquestioningly echoed the State Department line, verbatim, even as Moro and Lava Jato’s overreach repeatedly violated the Brazilian constitution.

Moro is accompanying Bolsonaro at Davos to talk about how corruption damages confidence of the market, with the notion of Brazil’s “strong independent judiciary” now a cruel joke. Transnational capital’s support for Bolsonaro and the fire sale privatisations proposed by his Economy Minister “Chicago boy” Paulo Guedes, we have covered extensively, and any crash resulting from his ultraliberal policies would be the most likely way this Government will come to an early end – by his support being hit economically.

Should the President be thrown under the bus as a result of this, or other growing scandals, it would complete a transition to de-facto Military rule for which Jair Bolsonaro has provided democratic packaging. That itself should keep him safe, for now, but for how long? It would be wrong to suggest that the new President had a “Honeymoon Period”, but any semblance of normality there was lasted less than 20 days.

Below, veteran journalist Luis Nassif gives his own analysis of the current situation.

The scandals, investigations and obscure links that haunt the extreme right’s first month in power

by Luis Nassif for GGN

“The truth has begun its march, and nothing can stop it.” said Émile Zola, analyzing the shift in public opinion over the Dreyfus case.

There is certainty and unknown in the current political scenario. The certainty is that the Bolsonaro government is over.

It will be difficult to evade an impeachment process. The unknown is what will come after him.

Our hypothesis begins with the following elements.

Part 1 – The dynamics of political scandals

Flávio Bolsonaro entered the crosshairs of the media with the mess surrounding his aide and driver Fabrício Queiroz. Bolsonaro’s lack of explanation was not enough. He then had to exacerbate the situation by fleeing interrogation by the Rio State Public Prosecutor, “imprisoning” Queiroz in the most expensive hospital in the country, and finally appealing (successfully) to the Supreme Federal Court (STF) to shut down Operation Furna da Onça, which is investigating Rio de Janeiro’s Legislative Assembly.

In the coming weeks there will be a relentless hunt for Bolsonaro business dealings. The disclosure by Jornal Nacional of a R$1 million transaction – without even knowing who the beneficiary is – has drastically raised the level of suspicion.

On January 7, 2018, Folha published the first suspicions about Flávio. It identified 19 real estate operations in the southern area of ​​Rio de Janeiro and Barra da Tijuca.

In November 2010, MCA Participações, which has among its partners a company in Panama, bought 7 of 12 rooms in a commercial building, which Flávio Bolsonaro had acquired only 45 days earlier. He made a profit of R$300 thousand.

In 2012, Flávio bought two apartments on the same day. Less than a year later, they were was resold, profiting R$813,000 with appreciation alone.

In 2014 he declared to the Electoral Court an apartment worth R$566 thousand. In 2016 the price was reevaluated to R$846 thousand. At the end of the year, the purchase was registered as costing R$1.7 million. One year later, it was resold for R$2.4 million.

This is not just a toll paid by low level political aides. Investigations will inexorably take place on the Bolsonaros’ links, particularly of Flávio, with obscure business behind which Rio de Janeiro militias (organised crime gangs made up of former/current Police and officials) are likely to be present.

The Operation that will get to the heart of the matter is not Furna da Onça, but one called Fourth Element.

Initiated on April 25, 2018 by the Rio de Janeiro State Public Prosecutor’s Office, it was intended to disrupt the largest militia in the state, operating in the West Zone of Rio.

They arrested 43 people. The gang’s biggest business was extortion. Its administration wing was active at Police Precincts 34th DP (Bangu), 36th DP (Bangu) and at the Police Station for Child and Adolescent Protection (DPCA) in Niterói, Rio de Janeiro Metropolitan Region. They identified people who would be targets of operations and extort them.

The leader of the organization is Wellington da Silva Braga, or Ecko, who took command after the death of his brother Carlinhos Alexandre Braga, or Carlinhos Três Pontes. Other brothers participated in the gang, including Luiz Antônio Braga, Zinho, owner of a company, Macla Extração & Comércio de Saibro.

Carlinhos Três Pontes was the captain of the militia. After he died he was replaced by brother Wellington da Silva Braga, backed up by the brothers Wallace and Luiz Antônio, known as Zinho.

1. Zinho is the main suspect in hiring the killer of councilwoman Marielle Franco. During the election campaign, a shocking image circulated of the future governor of Rio, Wilson Witzel, celebrating two thugs breaking a street sign bearing the name of Marielle. 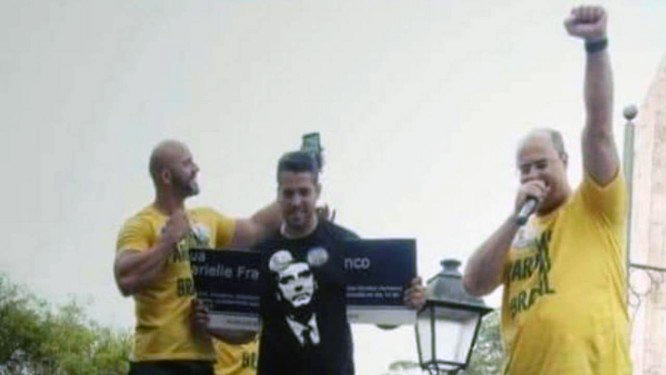 2. Operation Fourth Element saw twin brothers, PMs Alan and Alex Rodrigues de Oliveira, who served as Flávio Bolsonaro’s security guards during the 2018 campaign, arrested. Flávio defended himself by claiming they were merely volunteers without connections. Photos on Twitter suggested otherwise, showing the Bolsonaro’s intimacy – father and son – with the siblings. 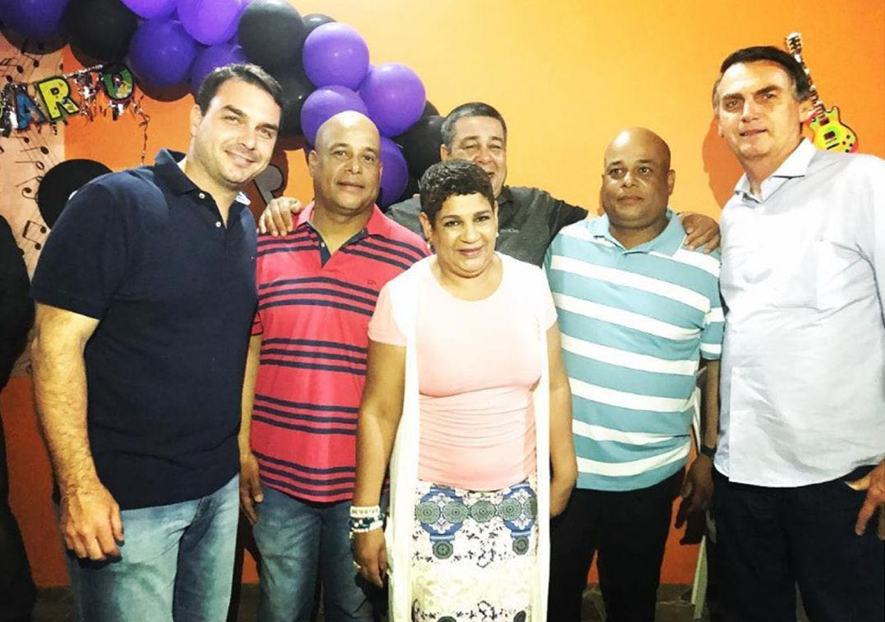 3. Three Military Police members involved in the organization, and detained by the operation – Leonardo Ferreira de Andrade, Carlos Menezes de Lima, Bruno Duarte Pinho – were the subject of praise and congratulations from Flávio, when state deputy:

“The Military Police of the State of Rio de Janeiro , with more than two centuries of immaculate existence, has always fulfilled its sacred constitutional duty to protect our society. (…) Amongst these successes, this motion gives special and deserved mention to the armed confrontation in the community located in Santa Cruz that culminated in the arrest of several criminals – among them the chief drug trafficker known by the common people of “Zé da Colina”, who has an extensive criminal record.”

According to Operation Fourth Element, “the scheme began when these police were all at the 36th DP (Santa Cruz) and continued after the transfer of the group to the Police Station for Protection of Children and Adolescents (DPCA) of Niterói, as of May of 2017.”

Part 3 – The history of Bolsonaro and the Militias

Elected federal deputy, on 08/12/2003, Jair Bolsonaro gave a speech in the Chamber defending the entrance of the militias in Rio de Janeiro .

“I want to say to the comrades from Bahia – I have just heard a Parliamentarian criticize the extermination groups – that as long as the State does not have the courage to adopt the death penalty, the crime of extermination, in my opinion, will be very welcome. If there is no space for him in Bahia, you can go to Rio de Janeiro. If you depend on me, you will have my full support, because in my state only innocent people are decimated.”

On December 17, 2008, another speech defending militiamen from criticism by Marcelo Freixo of PSOL – a target for assassination.

“No State Deputy is really campaigning to try and reduce the firepower of traffickers, to reduce the sale of drugs in our State. No. They want to attack the militiaman, who has become the symbol of evil and worse than the traffickers.”

Elected state deputy in 2007, with 43,099 votes, Flávio Bolsonaro joined the Human Rights Commission of the Legislative Assembly of Rio. At the time, he was seen wearing a T-shirt with the words “Human Rights: The outgrowth of vagrancy.”

At the time, he was a member of an community on social network Orkut called “rapists deserve death”.

In his speeches , he defended the payment of a protection toll to the militias by the inhabitants of the occupied territories.

“The higher classes pay private security, and the poor, how do you have security? The state does not have the capacity to be in the thousand favelas of Rio. They say that the militias charge tolls, but I know communities in which the workers make a point of paying R$15 for not having traffickers”.

Flávio fought strongly against the CPI inquiry into the Militias, and announced his intention to present a project regulating the profession of the “Mining Police”, an old term to describe officers who worked outside the regulations.

Operation Fourth Element occurred during the election campaign. It had some repercussion, but the information was muted so as not to influence the elections and the candidacy of Fernando Haddad.

At that time, the media, the market, military circles, and General Villas Boas, tried to hitch a ride on the anti-PT wave. When Bolsonaro rode it, he was spared in the name of the greater cause: he had a purpose. Now that purpose no longer exists. On the contrary. Every day he becomes a heavier burden for his biggest backer – the Military.

It is not Sergio Moro who is leaking information. In fact, Moro is ensconced in his new position. Most likely it is Rio’s own Public Prosecutor, which has long understood the extent of the Bolsonaro’s involvement with the militias.

This process will have consequences for Brazil’s institutions:

Armed Forces – Is unlikely to maintain its endorsement for a Government linked to the militias, having shown itself to be a rudderless ship, incapable of basic political articulation.

Public Prosecutor – With the support of the media, and with the impact of the revelations on Flávio, it will continue to reveal more information about the family.

Supreme Federal Court -With Military opinion changing, it can regain its courage and endorse the actions of the Prosecutor General of the Republic and Public Prosecutor of Rio de Janeiro.

Senate – The PSL Party’s descent into chaos is facilitating the election of Renan Calheiros to head of Senate, which will make it an autonomous power over Bolsonaro, especially now, as we see the dismantling of institutional protection.