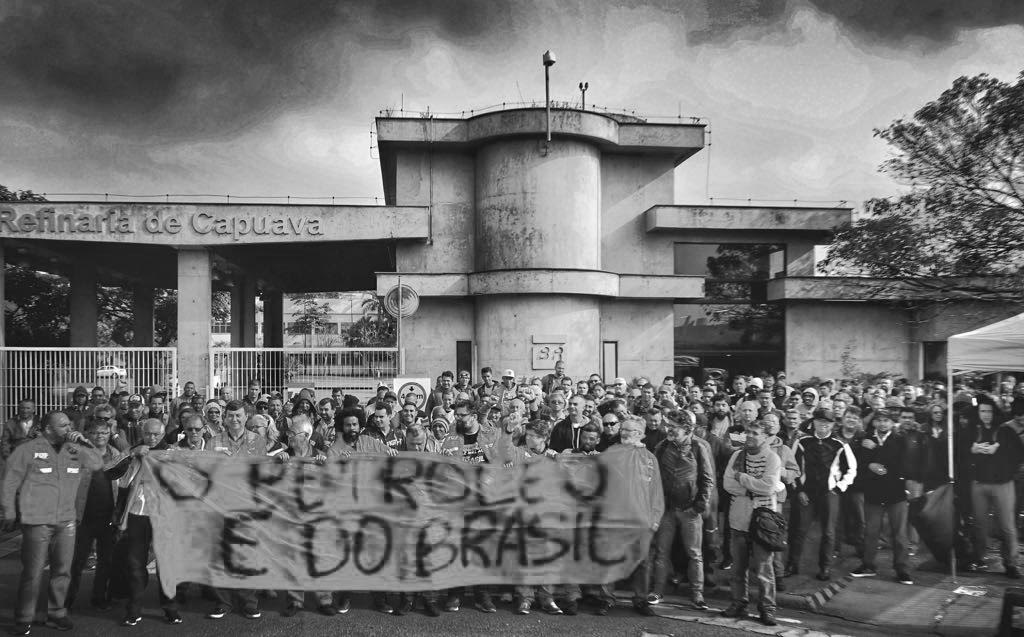 72-hour national warning strike started at 12:01 AM. Petroleum workers have been holding assemblies and protests for two months to halt Petrobras privatization and change its pricing policies.

“Everyone on the street on this May 30th to lower prices for fuel and cooking gas!” This is the rallying cry of the Petroleum workers’ strike, which started at 12:01 AM this Wednesday, 9 days after the start of the truckers’ strike.

The Unified Petroleum Workers’ Federation (FUP-CUT), began organizing the 72 hour warning strike in April, when Petrobras announced the sale of four refineries. Since then, they have held demonstrations, protests, public hearings and assemblies orienting the workers about the importance of defending Petrobras and fighting for price reductions for gasoline, cooking gas and diesel.

FUP Director José Maria Rangel says that if Petrobras uses its existing refineries and doesn’t sell them off to foreign capital Brazil can lower its prices for petroleum derivatives. “If they sell the refineries and terminals, as they are threatening to, then yes, Brazilians will pay more for gasoline, diesel and cooking gas, whose prices have already exploded in the past year.”

The Petroleum workers criticize the fuel pricing policy changes which came into effect after the 2016 coup and the ascension of Pedro Parente to the presidency of Petrobras. According to them, the new policy only meets the interests of international finance capital, absurdly increasing profits and prejudicing the Brazilian people.

“This is a disastrous policy which makes gas, diesel and cooking gas more expensive. A liter of gasoline already costs R$5 in some states and cooking gas is costing as much as R$120,” said Rangel. According to him, the Petrobras directorate’s decision to reduce refinery operations to 70% of total capacity forces Brazil to export crude oil and import refined petroleum.

“This 30% of capacity, which is not being used in our refineries, would be enough to meet the nation’s demands,” said Rangel. Furthermore, he said that Petrobras’ production, its refining capacity and the consumption needs of the country are comparable, meaning that there is no need for importing gasoline.

“Our production capacity is 2.2 million barrels a day, which is equal to internal consumption, and our refinery capacity is also around 2 million,” he said. “However, the current manager’s decision to benifit large importers has caused their number to increase from 50 to around 300 companies that are now, unnecessarily importing petroleum derivatives to our country. I reiterate that we don’t need to import any of it. We have enough petroleum to supply our nation. Furthermore, Petrobras is buying foreign petroleum for $75 USD/barrel when we extract it here from our offshore pre-salt reserves for $35 USD/barrel.”

The Petroleum unions held an extensive series of assemblies at company facilities, on the platforms, in the refineries, terminals and thermal plants from the beginning of April to May 24th to drum up members support to approve the strike.

In addition to changing Petrobras’ pricing policy, the strikers demand the suspension of all privatization measures including canceling the sale of the Refap (Rio Grande do Sul), Repar (Paraná), Abreu Lima (Pernambuco) and Rlam (Bahia) refineries. They are also demanding company director Pedro Parente’s resignation. According to the petroleum workers, Pedro Parente caused Brazil’s massive electrical blackouts in 2001 when he was a cabinet minister in the Fernando Henrique Cardoso government, and caused the current trucker’s strike and resulting fuel shortage.

For these reasons, the Petroleum workers are saying:

This article is a press release from the Central Ùnica dos Trabalhadores Union Federation (Unified Workers’ Central/CUT) that was translated by Brasil Wire. It can be seen in its original Portuguese here.