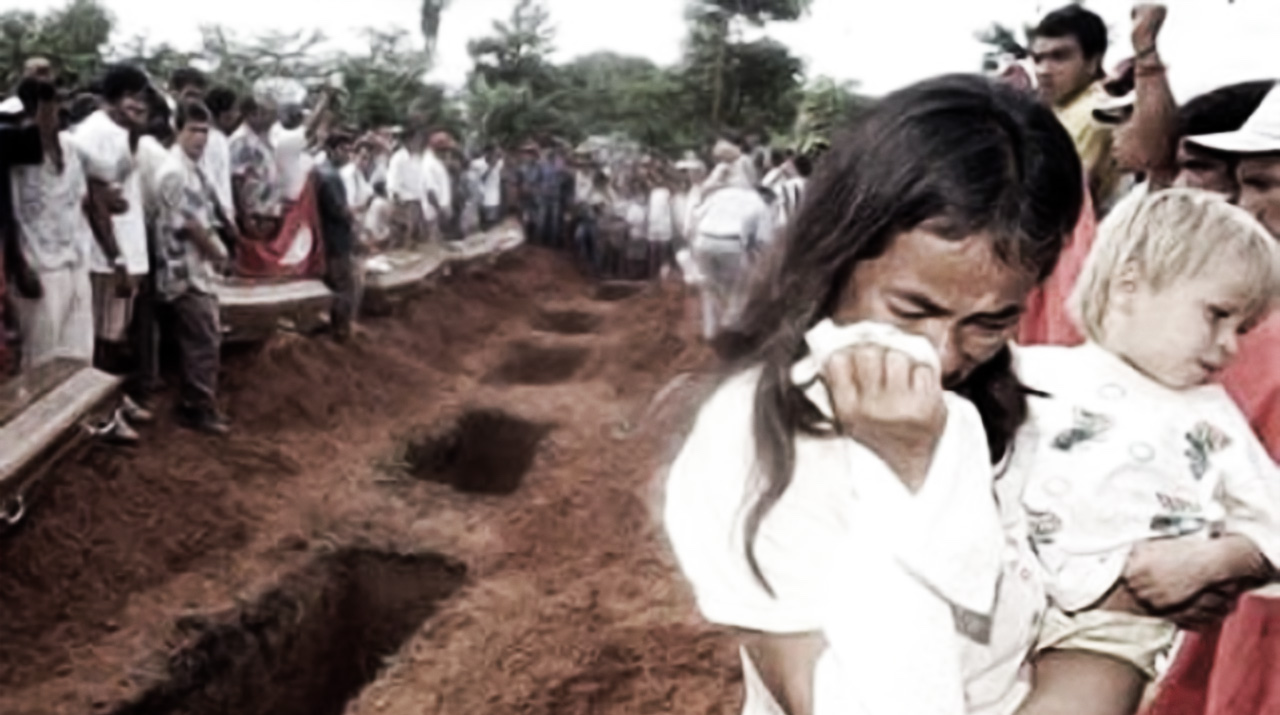 The Pau D’arco Massacre: A History of Impunity, Persecution and Death

On May 24, 2017, nine men and one woman were shot dead by civilian and military police in a camp of landless rural workers located on the Santa Lúcia farm, in the Pará municipality of Pau D’Arco.

The police claimed that the workers had an arsenal of weapons.  During the investigations, forensics carried out by the Federal Police, indicated that there was no confrontation and that the police would have shot rural workers in a planned action.

Seventeen policemen were appointed as executors of the crime by the Public Prosecutor of Pará. In 2019, the Paraense justice determined that 16 policemen must go to a popular jury, to answer for the crime of qualified homicide.  There is still no prediction of when the accused will be able to go to jury.

Unfortunately, in addition to the impunity, its victims remain haunted by a life of violence and persecution.

The only person arrested, however, is the survivors’ lawyer. Vargas is accused by the Public Ministry and the Civil Police of involvement in another case, the disappearance of Cícero José Rodrigues de Souza, president of a community association in a city next to Pau D’Arco.

After 25 days in prison, lawyer José Vargas Junior, an advocate for landless survivors of the massacre, was allowed to serve house arrest.  The habeas corpus trial took place on Monday the 25th of January.

The accusation is based on messages submitted by Vargas on WhatsApp in which, in a joke tone, he comments on the case. Ex-candidate for councilor, Souza has been missing since October 2020. The thesis of the police and prosecutors is that Marcelo Borges, Vargas’s friend, had Cicero killed to keep resources that the association was pleading in court.

The mobilization for the freedom of the lawyer involves dozens of human rights associations, including Amnesty International Brazil, the Pastoral Land Commission, and APIB in Brazil.  They’ve all pointed out the absence of evidence to justify the arrest.

Two days after the release of José Vargas Junior, a survivor of the massacre was executed. The complaint was made on the social media of the Pastoral Land Commission (CPT).  According to Pastoral, Fernando dos Santos Araújo was executed with a shot in the back of the head, in his own plot of land.  “Fernando saw his boyfriend die in the massacre.  He even entered the witness protection program, but decided to face the risk and return to Santa Lucia, ”says the CPT, referring to the farm that was the scene of the crime and quoting the worker’s phrase:“ We have already paid for this land… with our blood ”.

The latest report of CPT, revealed that in 2019 Brazil recorded 1,833 conflicts in the countryside, the highest number in the last five years and 23% higher than in 2018. The data brings together occurrences  related to land disputes, water disputes and labor disputes.

According to the report, last year, there was a record in land disputes, since the cases began to be reported by the entity in 1985. In 2019, 1,254 occurrences were recorded.  The average was five cases per day.  According to the organization, land disputes impacted the lives of 859,023 people in Brazil.