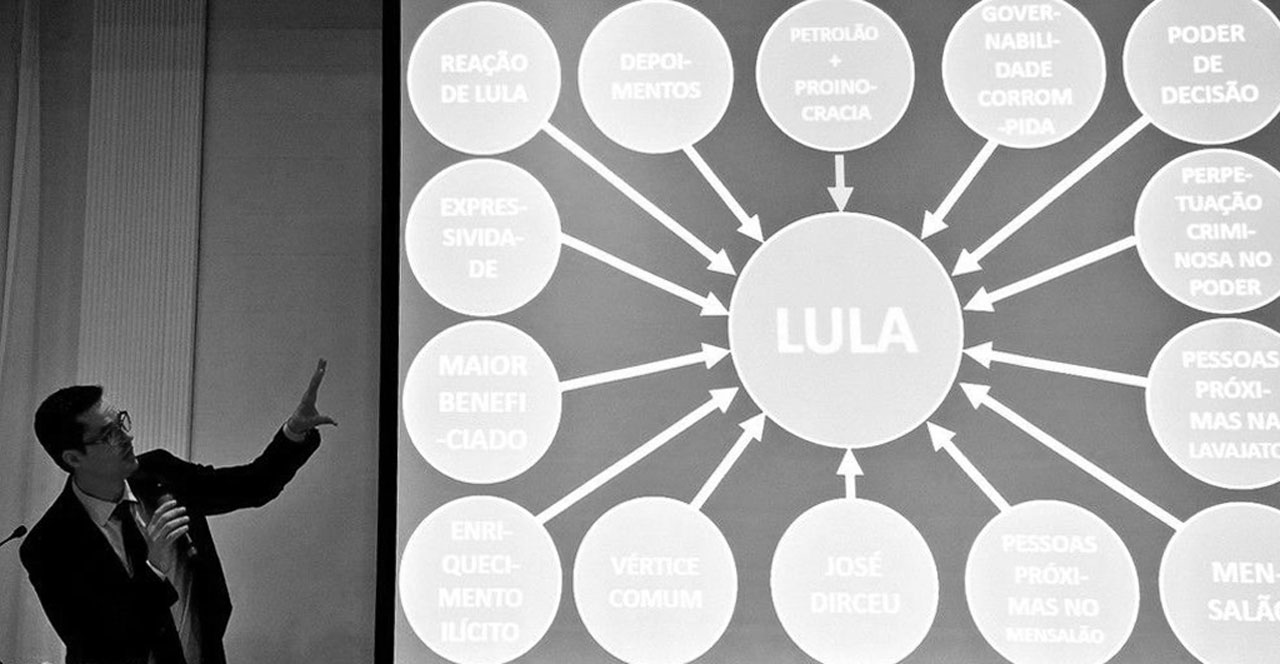 In the series, she shows how Lava Jato task force director, public prosecutor Deltan Dallagnol, received financial compensation through an asset sharing scheme based on kickbacks from fines that the US Government collected from Brazilian companies and individuals. According to Viana, during a meeting in which they negotiated the asset sharing deal, Deltan received a cash payment. In a leaked message Dallagnol says, “yesterday we spoke with them about ‘assets sharing’ of fines associated with the actions against Petrobras, and there is a positive perspective in some of these values. ‘Asset sharing’ is an elegant term for division of the cash.”

Viana recently explained some of the key points of her series in a 28 point thread, full of links and citations. The entire sequence is reproduced here in English as follows:

1) Communications between Deltan Dallagnol and the US Department of Justice go back to at least 2015. In February of that year, Attorney General Rodrido Janot traveled with Dallagnol and other public prosecutors to the USA to present the investigation to authorities and negotiate a judicial partnership deal.

2) George “Ren” McEchern, then-chief of the FBI’s International Corruption Unit, said that the FBI started “looking for countries that could invite FBI agents into analyze corruption investigations that have a connection to the United States,” in 2014.

3) In October 2015, Dallagnol and his colleagues coordinated a visit by DOJ prosecutors and FBI agents, who gave them an “excellent briefing about plea bargain testimony”. In return, they were introduced to the lawyers from defendants who were negotiating plea bargain deals in the cases against Odebrecht and Petrobras.

4) The Lava Jato task force hid this visit from the federal government. Eduardo Cardozo, who was Justice Minister at the time, told Agência Pública that he got scared. “I was warned by the Federal Police that there was an American team in Curitiba establishing a dialogue with authorities. The Federal Police asked me if we had authorized this. I hadn’t heard anything about it.” Cardozo said that he challenged Attorney General Rodrigo Janot, who assured that it was “an exclusively non-functional activity” with “some kind of academic purpose”.

6) Documents obtained by Intercept Brazil show that the American agents were going to Curitiba to “gather additional evidence about the Petrobras case” and “talk to lawyers about their clients’ cooperation with the investigation underway in the USA”.

7) After the visit, prosecutors suggested ways for the US to bypass the Federal Supreme Court to interrogate Brazilians. A Telegram message reads“ Now we have a way to convince companies and individuals to reveal facts: threatening to inform‘ the American authorities ’about corruption and international crimes (laughs)”.

8) Afterwords, the Attorney General was scared when he discovered that the Americans were already interrogating witnesses to the case in the United States. At this point, Dallagnol tells him it is too late to go back: “The USA has the knife and cheese in its hands,” he says on Telegram.

9) The following year, DOJ prosecutors and FBI agents returned to Brazil to interrogate the first Lava Jato whistle blowers. This time they came with a signed judicial collaboration agreement (MLAT). In RJ, they listened to Nestor Cerveró and Paulo Roberto Costa for 9 hours each.

10) During this visit, they also passed through Curitiba, where they listened to the money changer Alexandre Yousseff for six hours, as well as Agosthilde Mônaco de Carvalho, a former adviser to Cerveró who worked on the purchase of the Pasadena refinery, in Texas.

11) In October 2015, US Government representatives began saying, in closed meetings, that they were thinking about imposing a $1.6 billion fine on Petrobras.

12) During the second visit, Dallagnol appeared pleased: “Yesterday we spoke with them about ‘assets sharing’ of fines associated with the actions against Petrobras,” he said on Telegram, “and there is a positive perspective in some of these values. ‘Asset sharing’ is an elegant term for division of the cash.”

13) From that point forwards, Brazilian prosecutors discussed the possibility of using a portion of these fines to create a foundation over which they would have an obvious influence, which would support anti-corruption projects and training.

14) At the same time, Dallagnol and Roberson Pozzobom discussed opening a company to operate in the same field: “We are going to organize conventions and events and profit from them, OK?” Dallagnol wrote to his wife.

15) Their proximity led Brazilian prosecutors to use the partnership to try to raise more funds. At one point, they contacted a Singapore based company so that they could involve the DOJ and “increase the value”, according to Dallagnol.

16) I did a lot of research on Leslie Backschies, who now coordinates the FBI’s International Corruption Unit. She is fluent in Portuguese and her middle name is “Rodrigues”. Her first recorded visit to Brazil is in 2012, when she came to train Brazilian Military Police agents for the World Cup.

17) Leslie Baskschies also came to the 2015 meeting, but did not return in 2016. But she was well known to the prosecutors: Thame and Dallagnol speak fondly of her.

18) At an event in São Paulo in 2019, Ren McEchern said Backschies was sent to Brazil in 2014 to assist in the Lava Jato investigations. In another lecture, McEchern praised his former employee for doing “tremendous work” that was “fundamental for the FBI”.

19) Backschies rose up the ranks in the FBI after acting in the Lava Jato cases: she became head of the 4 FBI units that investigate international corruption and said to the AP: “We saw a lot of activity in South America – Odebrecht, Petrobras. We have had a lot of work there”

20) It is worth mentioning the role of other FBI agents. Patrick Kramer, for example, worked in the Gulf War and spent six months at the São Paulo Consulate working on “corruption cases” in 2016. All signs indicate that he served as an intermediary with Lava Jato prosecutors.

21) One of the most controversial Telegram conversations is an exchange, perhaps the most incisive, between Vladimir Aras, from the Brazilian Attorney General’s Office with Deltan Dallagnol. Arras is a specialist in international cooperation and warned Deltan that it was illegal to communicate directly with the American government.

22) Why is this relationship problematic? First of all, it is important to understand that under the US Foreign Corrupt Practices Act, the US Department of Justice conducts the investigation. [Unlike in Brazil] there is no separation in the USA between public prosecutors and the executive branch of government.

23) According to an Associated Press report based on an interview with Leslie Baskschies, Brazilian public prosecutors and the FBI spoke every 15 days to talk about the political and economic consequences of the investigations.

24) In the interview, Baskchies says: “When you’re looking at foreign officials in other governments — I mean, look, in Malaysia, the president wasn’t re-elected. We saw presidents toppled in Brazil. These are the results of cases like this.”

25) It is not, therefore, as, as ex-judge Sergio Moro put it last week, an issue of whether the DOJ or the CIA is at fault if a politician is caught paying bribes.

26) The question is more fundamental: can a government from another country be invited to investigate bribes that have occurred between Brazilian companies and Brazilian citizens, to punish them in their country? And worse, can it do this without being questioned by authorities or the press?

27) These questions are fundamental for any country to reflect on regarding its role in the world. No self-respecting journalist can ignore the geopolitical issues that touch, transform and shape the history and destiny of the people in their country.

28) It is worth remembering that, as Jair Bolsonaro’s Justice Minister, former Lava Jato judge Sergio Moro opened the doors even wider for the FBI, giving it access to a checkpoint on the triple border between Brazil, Paraguay and Argentina, which is a strategic point used by the USA under the pretext of fighting international terrorism.

This article originally appeared in Brasil 247, was translated by Brian Mier, and can be read in Portuguese here.