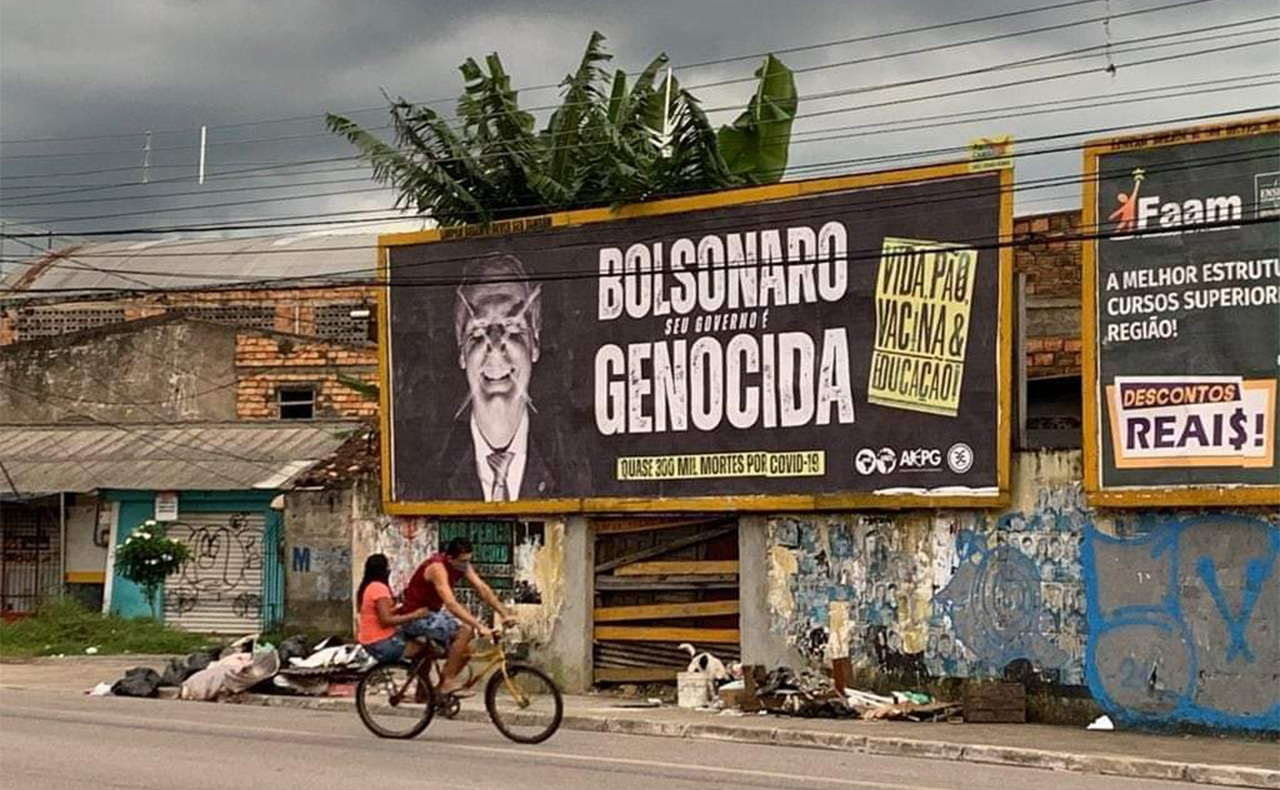 It will be assumed by many outside that to describe Brazil’s pandemic as genocide is an exaggeration. Unfortunately it isn’t.

From suppressing vaccines to refusing Brazilian states and municipalities the right to implement lockdown measures, it is wrong for international media to report Bolsonaro’s Covid-19 catastrophe as mismanagement, incompetence, or “failure to act”, when it has been based on an intentional strategy.

One year ago we called Brazil’s pandemic “a tragedy foretold“. Now we call it what it is: Genocide.

The victims of this genocide are Brazil’s poorest, most vulnerable; groups his government detest.

In January of this year, a study published by the Center for Research and Studies on Health Law at the University of São Paulo, and NGO Conectas, proved that the spread of the coronavirus in Brazil was a government strategy. The same researchers now insist the president should be investigated for genocide.

In May 2020, the far-right president insisted that “only the weak, the sick and the elderly should be worried” about Covid-19. What sounded like denialism a year ago now reads like a candid admission.

At that time Bolsonaro’s policy looked similar in content to that of allies Donald Trump and Boris Johnson, yet delivered with darker, more absurd rhetoric; of protecting the economy, of herd immunity, and minimisation of the disease’s seriousness. Aside from his infamous encouragement of maskless public gatherings, and relentless promotion of false remedies, a clear divergence in policy came with the arrival of vaccines against the new virus.

No other country on earth had a head of state actively preventing their population from being vaccinated, whilst leaving the poorest unable to protect themselves through isolation.

A recent study in Brazil’s largest city São Paulo shows that those living in its poorest neighbourhoods are 3 times more likely to die of Covid-19 than those in its wealthiest.

At that time, as the worst of the pandemic was hitting many parts of the world, the first vaccines against Covid-19 were already in rapid development. Brazil’s federal government was only interested in one.

Until recently Brazil led the world in vaccination. In 2010 Brazil vaccinated 83 million people in 90 days against the H1N1 virus.

The state of São Paulo was pushing ahead with its own vaccine, signing a deal with Chinese firm SinoVac, to develop its own vaccine CoronaVac using the Butantan Institute.

Butantan Institute offered its vaccine, whose early testing showed signs it would succeed, to the federal government 3 times: in July, August and October. The offers were ignored.

In September Butantan had requested emergency approval for CoronaVac. Regulatory body Anvisa, led by a Bolsonaro loyalist, refused. São Paulo governor João Doria insists that they could have had CoronaVac available in October if the federal government had listened. At that point Brazil’s toll stood at 150 thousand, and daily deaths were comparatively low. The total now approaches 300 thousand, records are being broken with over 3000 deaths every day.

Pfizer revealed that they had made several attempts to offer their vaccine to Brazil’s federal government which were ignored. It must be said that Pfizer’s negotiating terms for its vaccine in Latin America at this point were not something that any government should have accepted as was. However, the federal government would end up buying the Pfizer vaccine anyway, 7 months too late.

Perhaps most disturbingly, documents discovered by Brasil Wire revealed that the US government had intentionally pressured Brazil to refuse Russia’s Sputnik V vaccine, which was the world’s first to be approved for use, in August 2020. The head of União Quimica, which for months had been preparing to manufacture Sputnik V at a factory in Brazil, revealed that he believed Anvisa was deliberately obstructing its approval and use.

To dismiss these cases as simply Bolsonaro being against vaccines in general is not accurate. The one vaccine his government did order, in July 2020 was Oxford AstraZeneca. Nobody understood why this vaccine had such exclusivity with the federal government throughout 2020.

It would be January, when Oxford AstraZeneca was finally ready, before Anvisa would begin to approve other vaccines. Doses have been slow to arrive. At time of publication 9 out of 10 vaccine doses administered in Brazil have been CoronaVac.

Counterintuitive and illogical behaviour the Federal Government appears to indicate another agenda behind its vaccine moves. Freedom of information requests by Brasil Wire have earlier revealed that the UK government had been lobbying Jair Bolsonaro and his allies on behalf of AstraZeneca and other companies since before he was elected.

This documented intentional suppression of vaccines in Brazil by the Bolsonaro government could well have been responsible for the preventable loss of many thousands of Brazilian lives.

As vaccines finally, slowly roll out, with only 5% so far receiving their first dose, twice as many whites have been vaccinated as blacks/pardos in a country with a minority white population. In addition, Brazil’s black and pardo population is more at risk of infection and hospitalisation from the disease.

Bolsonaro’s government has been obsessed with pension reform since coming to power, a top priority of Economy Minister Paulo Guedes. For years Brazilian pension reform has had some unusual supporters outside, such as NATO adjunct Atlantic Council.

70% of Brazil’s Covid 19 deaths – around 210,000 – have been people over 60. Social movement the MST calculates that, consequently, the Bolsonaro government is now saving R$231 million per month in pension payments.

In May 2020, when Bolsonaro made his “only the weak, the sick and the elderly should be worried” remark, it was reported by Reuters and major media organisations that Paulo Guedes ally Solange Viera of government department Susesp, who had been involved in pension reforms pushed by Bolsonaro and Guedes the previous year, had remarked in a meeting:

“It is good that deaths are concentrated among the elderly … This will improve our economic performance, as it will reduce our pension deficit.”

This statement was leaked to the media by epidemiologist Julio Croda, head of the Department of Immunization and Communicable Diseases at the Ministry of Health, and corroborated by another official.

The report also added that Viera “showed little urgency when Ministry of Health forecasts were presented in mid-March (2020). The ministry predicted widespread deaths among the elderly, if the virus was not contained”.

Solange Viera’s words were a window to the kind of dark thinking at the heart of Bolsonaro’s administration.

On March 20 2021, three authors of the USP study published an article in Folha de S.Paulo to demand Jair Bolsonaro be held responsible for the crime of genocide under international law.

This was triggered by the furore over a police investigation of influencer Felipe Neto, under national security law, because he used the word Genocidist to describe president Bolsonaro.

Deisy Ventura, who is both a doctor of international law and law professor wrote:

‘There is a consensus among public health experts that most of these deaths could have been prevented. This is not a mistake or omission by the federal government. There is a strategy for the propagation of Covid-19 in Brazil, implemented under the leadership of the President of the Republic. It is the duty of the Brazilian legal community to discuss the Brazilian case in light of international criminal law, especially with regard to the genocide of indigenous populations, potentially aggravated during the pandemic, and crimes against humanity”.

By July 2020 Bolsonaro already faced three separate charges of crimes against humanity and genocide at the International Criminal Court at the Hague.

Operation Lava Jato and its supporters knew full well what Jair Bolsonaro was in 2018. He had made genocidal statements throughout his political career, yet Lava Jato, its national and international backers – including United States governments, both Republican and Democrat – enabled this genocide by delivering the presidency to a fascist.

When he was elected, some sympathetic western commentators insisted Bolsonaro was not a fascist. Media representatives of corporate interests which supported his candidacy reduced him to “arch conservative”. “If he’s a fascist, then where are the concentration camps?” others sneered.