US-based South African billionaire Elon Musk’s visit to Brazil has generated enormous controversy and suspicion, as reported by BRASILWIRE. It is now revealed that as well as Jair Bolsonaro, his government, and business leaders, Musk also met the commander of the Brazilian Air Force over use of the Alcântara space launch facility, and a satellite system to monitor the Amazon.

The meeting, according to information published on the FAB website, took place during the “Conecta Amazônia” event, organized by the Ministry of Communications, and which was attended by President Jair Bolsonaro, among other guests, such as Supreme Court Minister Dias Toffoli.

The Brazilian Air Force have made the Alcântara base available for commercial launches, from companies such as SpaceX, and explained to Musk the advantages associated with operating from the site. The Alcântara base has a series of theoretical benefits for launching rockets, such as the proximity to the sea, the location in relation to the equator, and the absence of earthquakes and hurricanes, in addition to little air and maritime traffic.

Deals struck under Bolsonaro for Alcântara so far have been criticised of infringing on both Brazilian sovereignty, and the rights of Quilombo communities who live there. 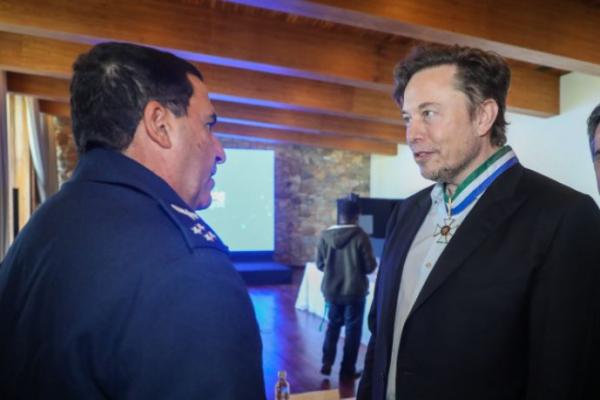 “SpaceX is a leading company in the global commercial launch market and can become a partner company in space vehicle launch operations from Brazilian territory,” the Air Force announced, heralding a new partnership with Musk.

Musk’s company was also selected to launch remote sensing satellites to monitor the Amazon, which will also be operated by the Brazilian Air Force.

President Bolsonaro’s verbal agreement with Elon Musk – bypassing official protocols – to turn over government information on mineral deposits in the Amazon and allow his company to conduct satellite surveillance, represents a crime against the state, according to journalist, Janio de Freitas.

During the ceremony, Elon Musk was also awarded the Medal of the Order of Merit by the Ministry of Defence. The rare medal was created to honour Brazilian citizens who have provided outstanding services to the Brazilian nation, and a handful of foreigners who, in the government’s judgment, are worthy of this distinction. In Musk’s case the award was given on account of his commitment to “helping the Amazon”.

The Amazon is rich in Nickel, and is also thought to contain large reserves of Lithium, both vital to Musk’s Tesla electric vehicle business. In 2020, when Musk was accused of supporting a coup against Bolivia’s president Evo Morales on account of the Lithium reserves in the country, Musk replied on Twitter: “We will coup whoever we want! Deal with it.“