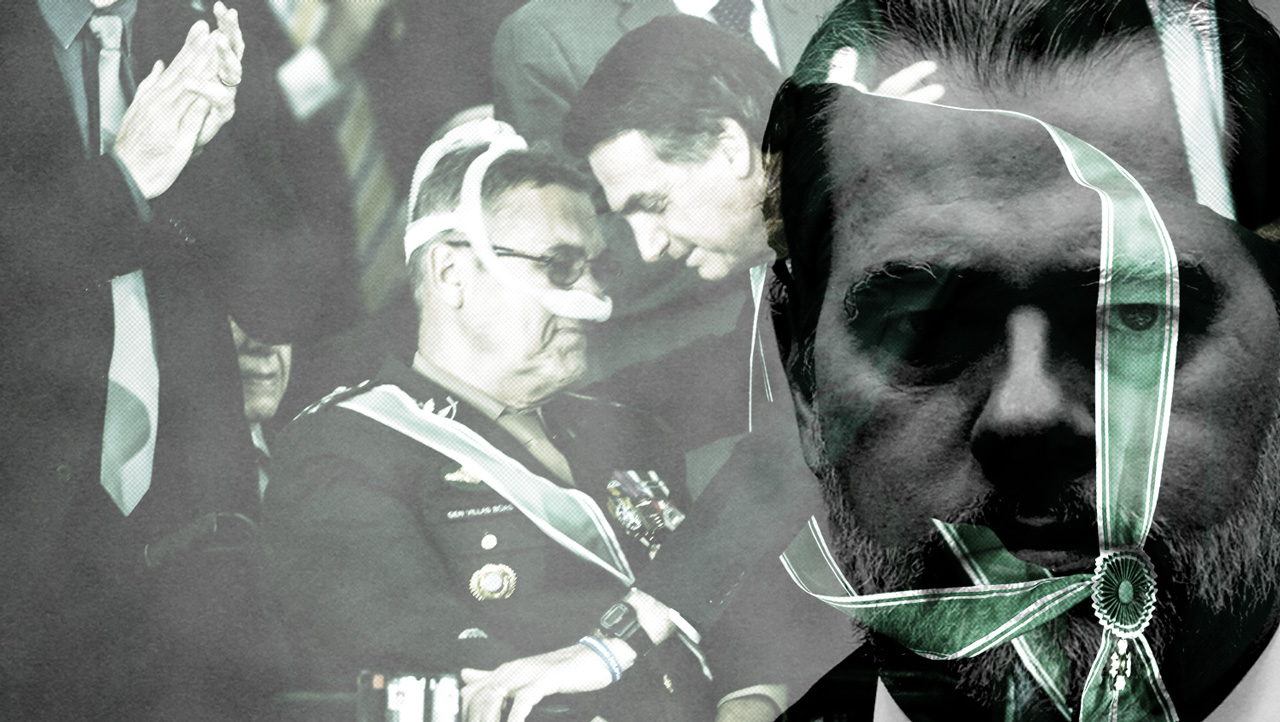 The Supreme Court’s annulment of former president Lula’s convictions, which kept him out of the 2018 election, is forcing re-examination of events that year. Having removed the Workers Party from power in 2016, phase two of the plot was to prevent their return at the ballot box. A meeting between the head of the Armed Forces and incoming president of the Supreme Court two months before the election sheds crucial light on how this was institutionally enforced from the shadows.

Revista Piaui has revealed another excerpt from the memoir of former head of Brazil’s Armed Forces, General Eduardo Villas Boas. The latest tract specifically details his relationship with the Supreme Court’s Dias Toffoli.

In the new book, Villas Boas candidly reveals the origins of a long term plot to remove the Workers Party from power, in particular through the Armed Forces influence on the decision to deny former president Lula habeas corpus in April 2018, as reported in Brasil Wire. Villas Boas made a statement on social media, read out on Globo’s nightly news bulleting Jornal Nacional, on the eve of the Supreme Court judgement, an act which is considered to have altered the vote’s outcome which came in 6-5 after Minister Rosa Weber announced she was voting against her own opinion, seen as the influence of the Armed Forces.

This prevented Lula from running in the election five months later. The always dubious charges from the US-backed Lava Jato anti-corruption operation are now proven to been a politically motivated witch hunt to prevent Lula’s anticipated return to the presidency, for which he led all polls comfortably. The barring of Lula’s candidacy went against a UN Human Rights committee order, and by defying it Brazil broke with the UN’s Second Optional Protocol to the International Covenant on Civil and Political Rights.

The judge who handed down the verdict was rewarded with the Justice Ministry in the resulting military dominated Bolsonaro government. Previously we reported on another book, called ‘The Eleven’, which details what was happening behind the scenes before the election and how Bolsonaro was elected “by force” by the Armed Forces. The book describes how Dias Toffoli warned his colleagues of a “dark scenario” – an actual Military intervention – if Lula was allowed to run, or even potentially if his last minute substitute Fernando Haddad went on to win the October 2018 runoff vote.

Sérgio Moro was awarded the highest military honours available during the Lava Jato operation, at key stages of the coup. The first, the Peacemaker Medal, for “services to the Army” during the impeachment of Dilma Rousseff, which the Lava Jato had operation had aided with illegal leaks of wiretapped conversations between the president and her predecessor, and the other, the Order of Military Merit – the Armed Forces’ highest award, of which only 100 have ever been issued – just as Lula da Silva’s politically motivated prosecution neared its conclusion.

In Piaui’s new report by Monica Gugliano and Tânia Monteiro, “the general, the tweet, and the promise” focus on a meeting between General Villas Boas and incoming Supreme Court President Dias Toffoli which is key in explaining how phase two of the coup was institutionally enforced.

Villas Boas built his personal influence over the Supreme Court Ministers over the years, but had been suspicious of Dias Toffoli, considered his legal resume to be weak, and saw him as allied with the Workers Party. The General proposed that Dias Toffoli take a special military advisor he trusted, General Fernando Azevedo, who is now Bolsonaro’s defence minister.

At the meeting, two months before the 2018 election, and with Villas Boas already confined to a wheelchair suffering from degenerative illness, Toffoli reassured him that the Supreme Court would allow nothing to upset the Military, such as changes to the amnesty law protecting those guilty of abuses during the 1964-85 dictatorship.

In particular Toffoli insisted that Lula, by this point already jailed in Curitiba, the headquarters of the Lava Jato operation, would not be released before the coming election.

This enabled the Military’s chosen candidate, former army captain Jair Bolsonaro, to run and win against a relatively unknown candidate who had only weeks to campaign. Bolsonaro was the democratic packaging for the Military’s coup.

After his election, Villas Bôas and Bolsonaro praised each other publicly. When he left his position as head of Armed Forces to serve as special adviser to the Presidency, Villas Bôas, now already sick and confined to a wheelchair, publicly told the President: “You bring the necessary renewal and release of the ideological bonds that hijacked free thinking”.

Bolsonaro responded: “Thank you, Commander Villas Bôas. What we have talked about will die between us. You are responsible for me being here.”