A Brazilian Senate inquiry has just been filed, demanding clarification from Foreign Relations Minister Ernesto Araujo on what role, if any, the federal government played in Eduardo Bolsonaro’s participation in a January 5th meeting in Washington DC. The meeting, which is being referred to in the US media as a “war council”, was allegedly held to plan the January 6th invasion of the US Capitol, and was attended by Donald Trump’s sons, Rudolph Giuliani, Mike Lindell, Sidney Powell and other key players in/allies of the Trump administration.

US journalist Seth Abramson’s February allegations, published in a series of articles on Substack, that Eduardo Bolsonaro attended the meeting during a surprise visit to the United States in which he also met with Ivanka Trump and Bolsonaro family guru/astrologer Olavo de Carvalho, had major repurcussions in the Brazilian media. After all, if the allegations are correct, a federal congressman, who is also son of the sitting President, participated in a planning meeting that was held to try to overthrow a foreign government.

As a result of the growing scandal, this week Senator Jacques Wagner (PT/Bahia) submitted an inquiry on the floor of the Senate demanding answers to 8 questions from Foreign Relations Minister Ernesto Araujo:.

1) What type of support did the Brazilian Embassy in Washington give to Congressman Bolsonaro’s trip?

2) Did the Embassy help organize Bolsonaro’s schedule during the visit?

3) What was on the official schedule?

4) Did the Brazilian diplomatic mission help organize the January 4 meeting between Congressman Eduardo Bolsonaro and his family with the daughter of Ex-President Donald Trump, Ivanka, in the White House?

5) Was the invitation for the above meeting communicated to the Embassy? Did it go through official channels? When was this invitation made?

6) Did the Embassy know that Congressman Eduardo Bolsonaro participated, on January 5th, in a meeting with the sons of Donald Trump with Michael Flynn, ex-National Security Adviser to former President Trump, and several other members of the Republican Party, during which a strategy of resistance to the inauguration of President Joe Biden was discussed, which culminated in an attack on the Capitol? Was this meeting party of the official trip schedule?

7) Did the Embassy negotiate for the possible participation of Congressman Eduardo Bolsonaro in this meeting?

8) Was a report on Congressman Bolsonaro’s trip to the United States prepared? If so, please send it to us. 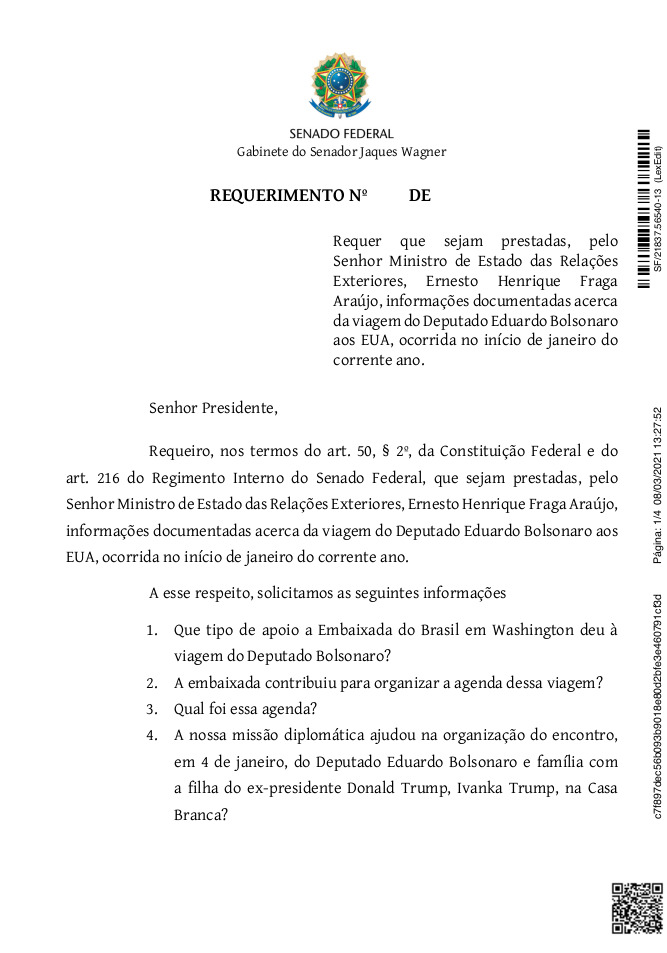 Brazilian Foreign Affairs Minister Ernesto Araujo is legally required to respond to the inquiry according to Brazilian law. When he does, Brasil Wire will report on his response.