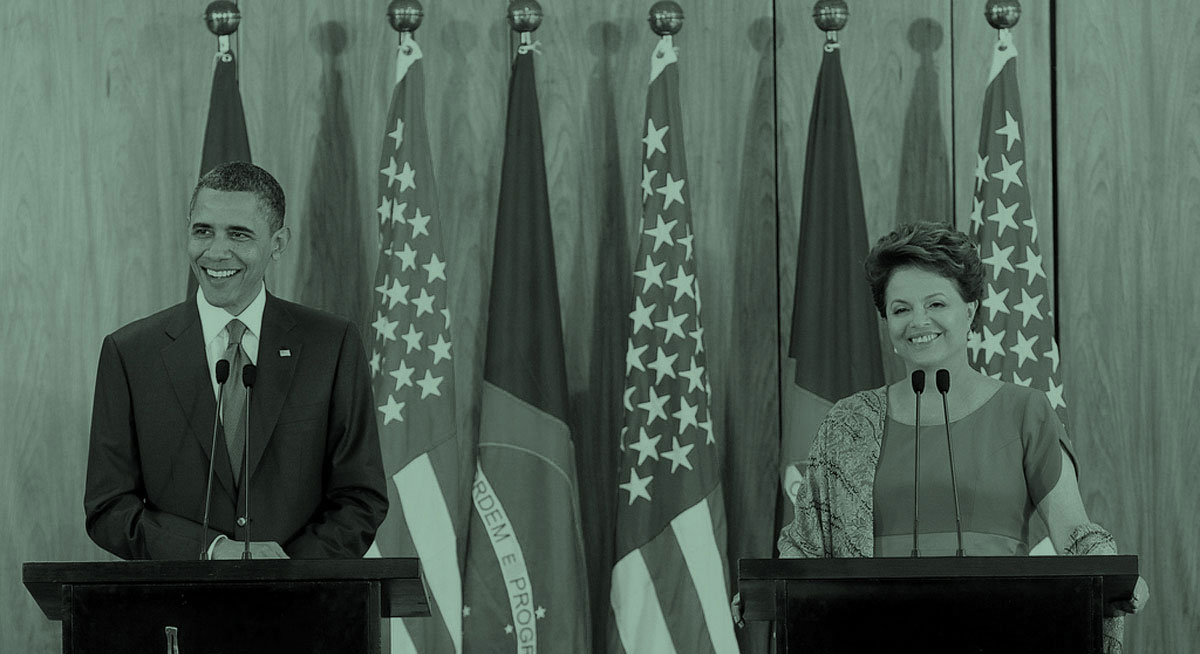 What could the United States do to regain the trust of Brasil?

During the approach to Brazilian President Dilma Rousseff’s re-scheduled visit to the United States there has been much talk about what Brasil can do to improve relations between two of the Western Hemisphere’s largest countries. The majority of reporting focuses on Brazilian failures but most of the problem lies in Washington.

Decades of weak engagement by the United States combined with a willful blindness towards why the Brazilian government is suspicious of the their northern neighbour’s intentions in the region have left relations near stagnant.

As Brasil Wire discussed in Chasing the Dragon the United States has too often confused its own interests with those of Brasil. Brasil is a friend to the United States, but Brazilian leaders, especially those on the left, have had little interest in engaging with Washington as anything but equals. The Brazilian leadership did not pursue closer relations with China, and to a much more limited extent Russia out of an ideological position, but a cold pragmatism that would make Henry Kissinger proud.

As the world celebrates the United States Supreme Court decision legalising same-sex marriage, it ought to be noted that Rousseff’s similar result in 2013 was practically ignored by foreign media, running as it did against a new trend of hostility towards her government. “Weaponisation” of human rights, in particular LGBT rights, as advocated by United States Ambassador to the United Nations Samantha Power, grants the United States even greater ability to define the narrative on Brasil’s relationships with BRICS partners Russia and China, and with non-aligned states such as Iran and Venezuela, while brushing their own horrific violations such as torture and human experimentation at Camp X Ray in Guantanamo Bay, Cuba, or the dystopia and racial prejudice of its prison-industrial complex, under the carpet.

This was also the case with the Lula administration’s maneuvering with Iran. Initially Brasil saw another market available for its agriculture and industrial products and a chance for Brasil’s oil interest to operate in the region – since 2006 Brazilian exports to Iran have surged nearly doubling to US$2.3bn as of 2011. The Itamaraty Palace (Ministry of External Relations) also saw this as a chance to push forward with its long term goal of a permanent seat on the UN security council. The negotiations failed but there was strong support among both the international community and experts that Brasil was right to attempt, Julia Sweig, of the Council on Foreign Relations, told the New York Times that Brazil “was exercising its own version of what America often did.” But soon after, despite it being clear that Iran would be be a useful tool in its long term strategy Brasil dropped Iran like a hot stone. Then new President Dilma Rousseff saw a perfect opportunity to exit and to present a more “moral” foreign policy declaring Iran’s stoning of prisoners “medieval behavior” and cutting ties.

Since the 2010 deal attempt Brasil was called naive and trying to punch above its weight, but the reality is that comments like this simply show the author either doesn’t understand Brasil or is wilfully blind to its interests. Others like Latin American expert Matias Spektor offered a balanced opinion, as in his May 2010 Op Ed at the Council on Foreign Relations saying “As is normally the case with rising powers, Brasil is now redefining its own national interests in ever-expanding terms.“

In the past the Brazilian economy was so deeply coupled to the United States that the expression was coined “when the US catches catches a cold, Brazil catches pneumonia”. In the Lula years Brasil made hay during the commodity boom, paying off international debts and pursuing a South-South foreign policy to increase and diversify trade away from dependence on the United States to an increasingly plural world. Too often this is portrayed as some kind of ideological choice by Brasil akin to the relationship between Venezuela and Cuba but the truth is Brasil has been accused of behaving no better than the United States and China in term of having “flexible” attitude to local laws and environmental standards. The reality of Brasil’s foreign relations both under Lula and to a lesser extent Rousseff are about creating opportunities to further Brazilian interests. Brasil has refrained from either overt support or criticism of Latin American countries and often abstained in United Nations votes. As we will discuss, it is frankly galling to read commentators from the United States criticising Brasil for simply following a foreign policy that sees its own interest as paramount when the United States has frequently acted in exactly the same manner but with far more brutal results.

A major reason why the Brazilian government views the United States with suspicion is the perceived hypocrisy in Brasília of Washington’s foreign policy. This is without even getting deeply into the United States’ extremely controversial history of both direct and indirect interference in Latin America from pre-Cold War to the present day. The United States all too often confuses its own interests with those of other countries. During the Cold War this resulted in one of the United States’ most myopic and counter productive foreign policy periods when – opposed to what it was doing in Europe – the United States aided and abetted some of the worst and most brutal dictators since the fascist regimes of 1930s Europe defeated only years earlier. The United States could have chosen to manage the spread of communism the way it had in Europe, financing development, strengthening institutions and building functioning liberal democracies with room for both conservative and progressive voices – even those as the fringes. Instead the United States bet the farm on brutal dictators like Pinochet, Batista, Stroessner and Brasil’s own Médici.

Alarmingly, active United States support and collusion in Brasil’s 1964 coup, including the dispatch of a naval task-force to support it, is frequently omitted in discussion of historic relations between Brasil and the United States. That period is at the root of an understandable mistrust of Brasil’s northern cousin, and can not be minimised.

Cold War 1.0 may have ended yet the hypocrisy remains, with the case in point being the United States’ selective indignation of Venezuela versus Colombia.

There are obviously problems in Venezuela and the PSUV’s (United Socialist Party of Venezuela) management of the Dutch Disease that frequently plagues oil rich countries and dealing with the bitter class war that the country has descended into have been less than optimal. This has resulted in sanctions based on human rights abuses that Venezuela stands accused of, which are contested, and the United States bizarre listing of Venezuela as a national security risk.

It is hard to fathom the logic of this move, towards replicating the 60 year failed policy against Cuba, just as the Obama administration began to roll back a half century of failure. However, the United States government, many in the media and think tanks seem to have a blind spot that Venezuela’s neighbour Colombia has a human rights record that far outstrips anything that may be occurring across the border in Venezuela, which has been going on for decades, under governments bankrolled by the United States. Indeed it beggars belief that someone like ex George W Bush advisor José Cárdenas can write regarding Venezuela “The fact is that the United States has every right to deny privileges for those who perpetrate violence against fellow citizens” with a straight face considering that the United States has backed far worse human rights abuses for decades in Cárdenas’ ancestral home across the border in Colombia.

Then we come to Brasil’s resources. In this article we explored what revelations from Edward Snowden and Wikileaks taught us about the United States unhealthy interest in Brasil’s Oil & Gas, and willingness to assist United States producers politically in breaking the Petrobras monopoly on Pre-Sal exploitation. Clearly this issue is not going away, and a dose of honesty from the United States would be well received by Brazilians.

However, the NSA’s surveillance of Brasil and Brazilian insitutions did not end with Petrobras, President Rousseff, or the Ministry of Mines & Energy. Imprisoned hacker Jeremy Hammond alleged that the FBI had instructed him through an intermediary to target the emails and databases of the Brazilian Military Police’s internal affairs department. In any honest discussion of relationship between the two countries we must ask why this took place, what the motivations were, and have genuine guarantees that such potential destabilising activity has ceased.

Interference in domestic politics, through both the State Department and private NGO’s, with funders such as the Koch Brothers who are linked to rightwing Brazilian political movements as well as a foreign media that pushes a business agenda favourable to United States interests, has been subtle but rife in Brasil in recent times, as it is across the region. If the United States genuinely seeks a partnership as equals with Brasil, this violation of sovereignty simply must end.

There must also be an end to rumoured covert operations within the country, in particular within the Amazon region and its frontier with Colombia, in which the U.S. has 7 Military bases. Brasil’s Intelligence Agency, ABIN, is said to consider the United States as the principal threat to the country and in 2014, military exercises were held to simulate an invasion of the Amazon from the north by a ‘much larger army’. Brasil is often accused of paranoia regarding the Amazon region, but fear of the state’s integrity has has been a part of Brasil government policy framework since the country was first colonised. It is important to understand that Brasil is and will continue to be hypersensitive to any perceived threat to its sovereignty over the Amazon basin and just because you are paranoid doesn’t mean they aren’t out to get you, as a proposal to privatise the Amazon by British Environment Minister then Foreign Secretary David Miliband illustrates.

For any genuine rapprochement to occur, honest recognition and respect from the United States towards the sovereignty of Brasil & its neighbours must be established and demonstrated, firstly by jettisoning default opposition to consolidation of the MERCOSUL project, and acknowledging that the BRICs economic and politic rise – which will overtake G7 in share of the world economy within a decade – is here to stay. Only then could a partnership of equals, in a multi-polar world, develop. There are bright spots, a recent article by AS/COA Vice President Eric Farnsworth, “America Must Take Brazil Seriously” was a welcome addition to the debate from an important United States policy think-tank. Farnsworth was unusually frank about United States failure, arguing rightly, that Washington needs to look realistically at Brasil’s aspirations.

When Barack Obama came to power 6 years ago, then Secretary of State, and probable next United States President Hilary Clinton promised a “Reset” in relations with Russia which ended in Cold War 2.0. Let’s hope this United States/Brasil “Reset” delivers more desirable results.

What the United States government should consider if it really wants a strong, friendly and mutually beneficial relationship with its southern neighbour, Brasil: