On August 18, Vice Brasil journalist and occasional Brasil Wire contributor Marie Declerq, broke the news that the Instituto Mises Brasil think tank, which receives funding from US libertarians, has published articles by Christopher Cantwell, the American Nazi who helped organize the Charlottesville Virginia protests. Cantwell made the news recently when he was filmed in a Vice documentary threatening to kill Jews and blacks, and later appeared in a YouTube video sobbing in fear of being arrested.

News that Mises Institute, founded in 2007 and part of the Libertarian Atlas Network, has published material by Augusto Pinochet fanboy Cantwell shouldn’t actually be that surprising. In 1927, Mises himself argued that Fascism had saved European Civilisation, and “The merit that Fascism has thereby won for itself will live on eternally in history”. Meanwhile, Atlas, which has been built over decades to distort Latin American politics, is funded by the Koch Brothers (a family with their own distinguished Nazi history).

Following Charlottesville, Cantwell sparked outrage among South Americans by appearing in his own T-Shirt design depicting the murder of leftists in helicopter “death flights” – a common practice in Chile, Argentina and elsewhere during Operation Condor in the 1970s – a US supported cross-border campaign which assassinated thousands of labor union members, opposition activists and intellectuals. 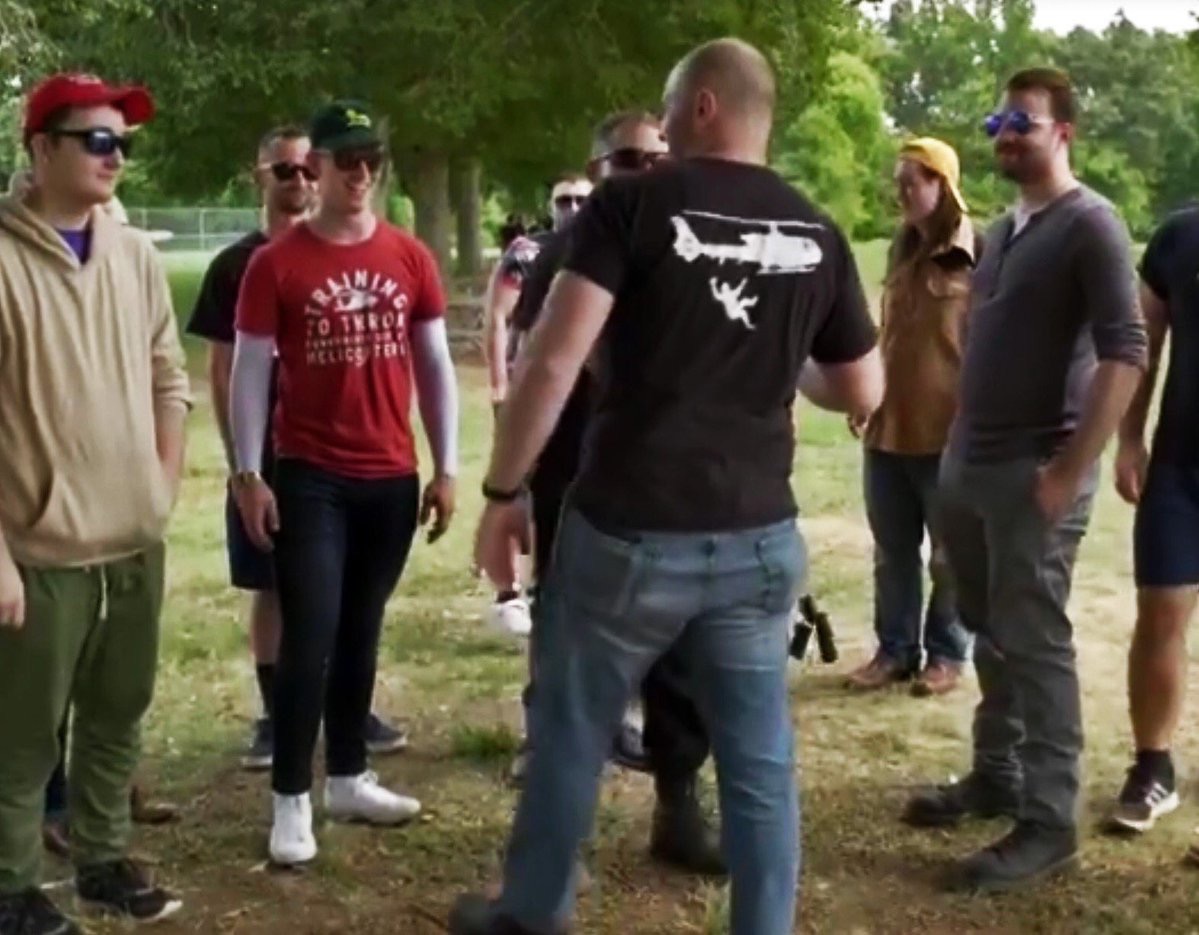 Cantwell appeared in Vice Documentary on Charlottesville wearing his “Death Flight” Shirt, his colleague wears another adorned with slogan “Training to throw Communists out of Helicopters”.

Although this is a macabre extreme, the interchange of ideas and individuals on the conservative spectrum, between self-defined libertarian groups and the overt Far-Right, is relatively common. Politically, it follows that Libertarians idolise Augusto Pinochet.  After the 1973 US- sponsored economic sabotage and coup in Chile put neofascist dictator Pinochet in power, he was visited by libertarian heroes Milton Friedman and Fredrich Hayek. In a Chilean newspaper interview at the time, Hayek expressed an opinion which still seems to be held by many neoliberals and libertarians to this day – that  freedom for corporations in developing nations is more important than freedom for individuals – when he said, “Personally I prefer a liberal dictator to democratic government lacking liberalism”.

Neoliberal/corporate think tank Council of the Americas tried to broker a deal with the CIA to prevent socialist Salvador Allende from being democratically elected in Chile in 1970. Today known as AS/COA, it’s Vice President, former Reuters Brasil bureau chief Brian Winter, has called Pinochet a “Revolutionary“. 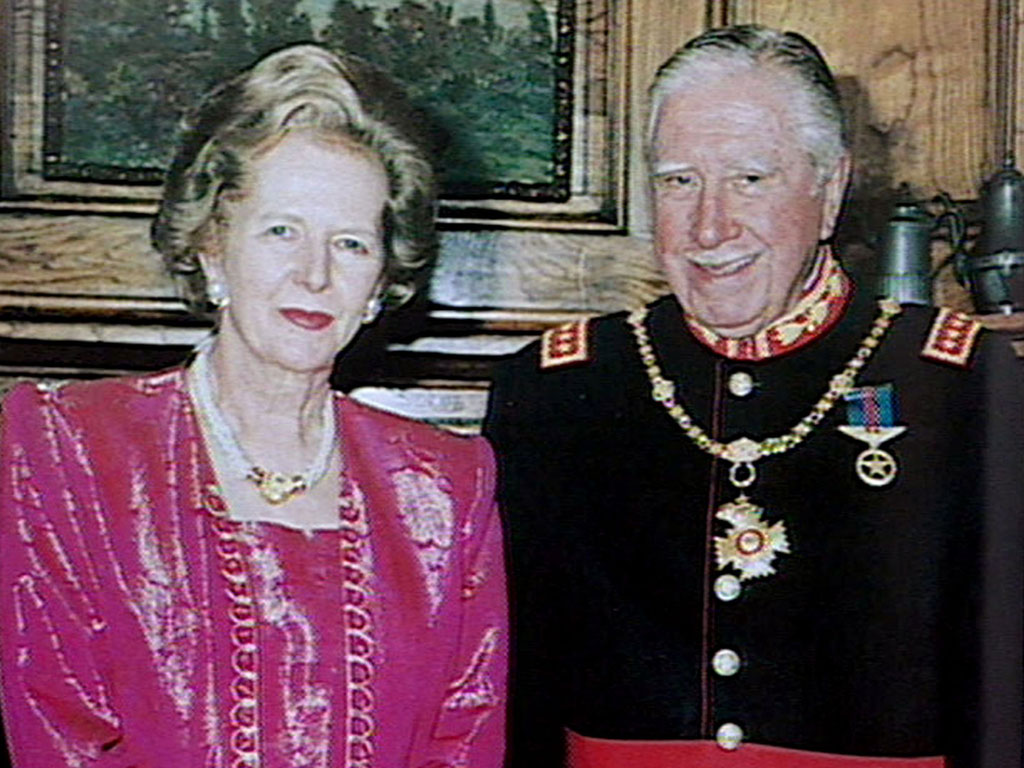 US Neo-Nazi obsession with confederate statues finds its parallel in Brazil with Pro-Gun Ownership, Anti-Womens, Racial & Worker’s Rights campaign group Movimento Brasil Livre, which is associated with Mises Institute and Koch’s Students for Liberty. Citing Margaret Thatcher as inspiration, MBL have also openly declared their reverence for the Bandeirantes – the colonial militia who went out to secure the vast interior of the country, committing genocide against indigenous populations, and are celebrated with an enormous monument in São Paulo’s Ibirapuera.

Most recently MBL and its Conservative allies (They self-identify as “Liberals”) have been accused of the “Nazi-style” censorship of a Queer Art exhibition in Porto Alegre. The exhibition was funded by multinational bank, Santander, which was then accused by rabid right-wing activists of being “Communist”.

MBL is notable that it is fronted not by its original founders, but by ethnically mixed, telegenic young men, some of whom were reportedly media/leadership-trained in the United States. It is accused of doing this to avoid the perception of being a white elite organisation in a country with majority black population. Their opposition to racial quotas and black consciousness day are usually voiced by these frontmen, and their rhetoric has even included a bizarre comparison between Hitler and the historic leader of Afro-Brazilian Quilombos, Zumbi dos Palmares. Some its members also mimic an Anti-Refugee/Muslim xenophobia, which is imported wholesale, without context, from the Far-Right in Europe and the US.

One of the groups most visible leaders, Arthur Moledo do Val, known for his video blogs in which he visits left wing protests and lectures people about free market economic dogma, was recently photographed by Antifa trying to disrupt a labor union protest with two neo-nazi skinhead bodyguards.

MBL, which was/is also funded by Atlas Network, plus the main parties which make up Temer’s Post-Coup Government, operates as an infantile sub-Breitbart fake news site, with a loyal audience who act as an online and offline far-right hate-mob. These predominantly white young men, radicalised by sites such as MBL and similar, gained notoriety by harassing left-wing politicians at their homes, before going on to physically threaten recent high-school occupations for better quality public education – with some supporters even promoting the rape of female protesters on social media. Meanwhile MBL was promoting a McCarthyite campaign against “Communist Indoctrination” by teachers. Elsewhere they talked chillingly of a “Ukrainian” scenario awaiting Brasil should Dilma Rousseff not fall peacefully.

Another campaign spread the outright lie that Hitler was a leftist, and Brasil is still gripped by an idiotic debate over this fallacy – not helped by a recent BBC Brasil article which concluded that the Nazis were neither right nor left, because they were “totalitarian”. 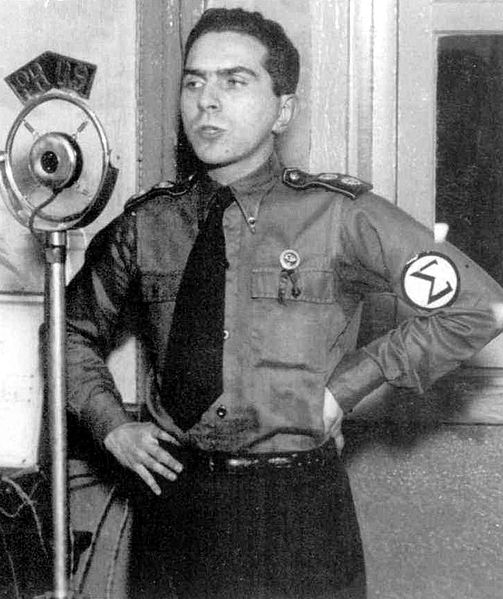 Miguel Reale, Integralist (Fascist) and author of Institutional Act 5 (AI-5) which cemented Military Rule in 1968. His son Miguel Reale Jr co-authored the petition for Rousseff’s illegitimate impeachment – delivered to Brasilia by MBL and other conservatives.

It was a curious feature of the period leading up to Dilma Rousseff’s impeachment that MBL received more coverage abroad during its campaign than any Brazilian political party or social movement. It was given free-reign in advertorials published by a range of magazines and newspapers such as the Economist, Time and the Guardian, in which they declared that Brazil needed to “get over” the 64-85 Neofascist Dictatorship. One of the group’s front men is now a city councillor in São Paulo for the ‘Democratas’ party (Formerly Liberal Front), which is the principal descendent of ARENA – the Dictatorship-era’s Government.

Far-Right elements at São Paulo’s Anti-Dilma protests of 2015 & 2016, organised in part by these “grassroots” free-market organisations, were distinct and visible, with their flags and banners, calling for Military Intervention, adorning a fleet of 20 sound trucks alongside those of MBL and parallel corporate-funded Pro-Impeachment group VemPraRua. 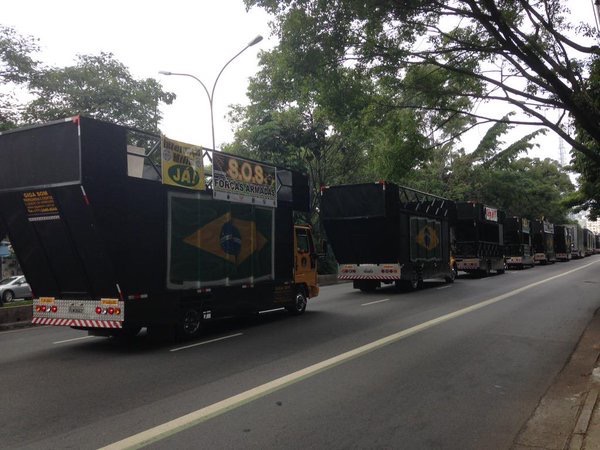 São Paulo, April 2015: A  convoy of 20 sound trucks, bearing banners of Libertarian and Far-Right pro-military factions side by side, heads to the protest calling for Dilma Rousseff’s overthrow.

For the most part, the demonstrations evident proto-fascist tendencies – which went against the narrative of a youthful, grassroots organisation demanding economic liberalism and an end to corruption – were overlooked. Media at that time also failed the basic test of scrutinising the money behind MBL’s campaign, with the Guardian allowing them to state unopposed that they were funded by the sales of “t-shirts and stickers” despite the money trail to Pro-Impeachment groups from US Libertarian Think-Tanks being already well documented in 2015.

As the connections between the US “Alt-right”, corporate-funded think tanks and fascism in Brasil become clearer, the anglo media & business groups who blindly supported its rise will have some important questions to answer.