On the night of May 23, I joined a group of activists from the Central de Movimentos Populares (CMP) social movement for the 16 hour bus ride from São Paulo to Brasilia. The trip was coordinated as a bus caravan and as we stopped for dinner along the way it became apparent that this was going to be much larger than the solidarity act for Lula in Curitiba that took place two weeks ago. Buses, mainly funded by the union federations, were coming in from all across Brazil, from as far away as Rondonia and Manaus. To give an idea of the number of people coming in, the CUT union federation brought 40 buses from the city of Uberaba, Minas Gerais (pop. 350,000) alone. We stopped for breakfast in Cristalina, Goias, the next morning at a truck stop that had around 60 buses in its parking lot and the line for food was huge. It must have been the busiest morning that place had ever seen.

We arrived in Mané Garrincha stadium parking lot, packed with buses, at 11 AM and the leader of our group, Gegê, announced that there would be an assembly in which we would vote on the plan of action, but the proposal was to hold a protest in front of the Ministry of the Cities at 2, and general protest march to the Congress and Senate buildings at 5. “We have to watch the Força Sindical”, he said, “we know they supported the coup last year, but their base members put so much pressure on the leadership that they’ve come out in force today and they may go off on their own”.

The Força Sindical, with around 5 million members, is the second largest union federation in Brazil and the fact that they have now come on board in the anti-austerity protests shows how much the Brazilian working class is rising up against the scandal-ridden Temer government, which had a 4% approval rating before last weeks testimony from a JBS Corporation executive revealed millions of dollars in bribe money paid to the ruling PMDB and PSDB parties came to light, causing the arrest of Economist and AS/COA‘s supported 2014 presidential candidate Aecio Neves’ sister and chief strategist.

Sure enough, before the assembly could be held the Força Sindical took to the streets and some of the other union federations followed suit. By 12:30 PM, the entire 6 lane wide road between Mané Garrincha stadium and the Congress was full of people, before the CUT and the social movements even started. To give an idea of the scale of the protest, the distance between these two buildings is 4.1 km. This is four times larger than the 8 lane-wide section of Avenida Paulista that stationary pro-impeachment protesters filled up in 2016, in a protest that was widely exaggerated in the Brazilian and foreign media as having 1 million people in it. As crowd estimates grew from 150,000 to over 200,000 this was already the largest street protest that has ever taken place in the city of Brasilia.

To make it perfectly clear, this was not an “anti-corruption” protest, as has been misrepresented in the few Anglophone media outlets that covered the events. The two broad based social union and labor federation coalitions that spent months organizing it made their three demands perfectly clear to anyone in the media who took the time to read their press releases or speak with them: no austerity cuts, out with president Temer and direct elections now.

I was hired by the Brazilian blog Nocaute to film the events of the day, and positioned myself under a tree on the huge quad in front of the Congress building. As the sound truck with 8 union and social movement leaders on it arrived at the side of the Congress building and the quad began to fill up with people, the police opened fire with tear gas grenades. Some people panicked and began to run back. “Don’t panic. This is a peaceful protest and we have legal authorization to be here”, said a woman from CUT on top of the sound car. As the gas increased, she said, “OK, we’ve made our point. This protest has been a success. If you want to leave now, go ahead. We are going to turn our sound truck around and leave now.”

Inside, Rodrigo Maia, President of Congress and next in line for the presidency should Michel Temer fall, panicked. This son of former Rio de Janeiro Mayor César Maia, representing the former official Military Dictatorship Party DEM (formerly PFL/ARENA) who only got 3% of the vote in the last Rio de Janeiro mayoral election, issued an order for Martial Law authorizing the Military to take over national security. This act cased pandemonium inside the House, and the session had to be shut down. 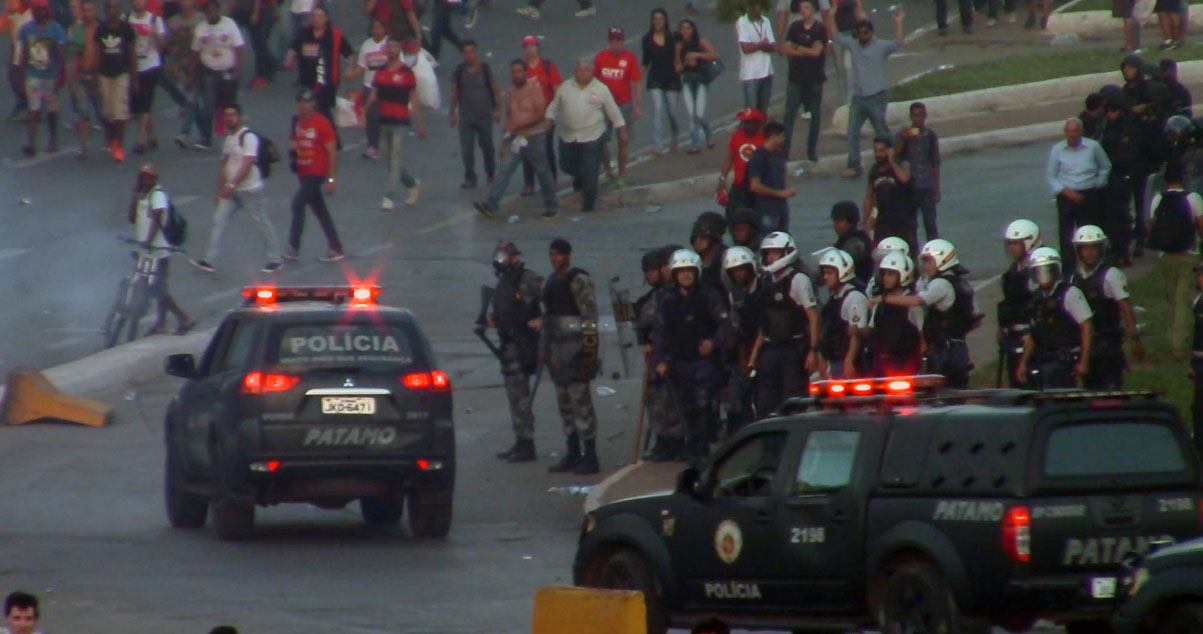 At this point, CUT was still arriving in the area and as some people fled, tens of thousand of people arrived on the scene. As has happened time and time again since 2013, a group of self-proclaimed “black bloc” anarchists and youth, numbering 2-300 at most, began throwing rocks at the police and smashing windows. As usual, they had refused to participate in the protest planning process or any of the democratic assemblies that had been held to discuss tactics, and piggy-backed on 3 months of planning and mobilization by the organized Brazilian left. As usual, they were followed by a nearly as large group of photographers and video cameramen who knew that violence porn sells, that the for-profit media would certainly only highlight this spontaneous element of the protest, which had nothing to do with the objectives of the 200,000 peaceful protesters.

This was the only part of the protest that was covered in the media. TV Globo refused to show any footage of the march itself. It claimed that there were only around 5000 people there and only showed footage of chaos after the official protest had already ended. At this point, the foreign journalist community, which had completely ignored the protest all day, started tweeting about vandals damaging property in Brasilia. Some of them ignorantly/unethically declared that they were “anti-corruption protests”, and this misinformation was reflected in the Anglophone media coverage of the event, giving the casual news consumer the impression that Brazilians who ousted a corrupt leader last year were taking to the streets against in an unplanned, spontaneous expression of outrage against yet another corrupt leader. None of them took the time to speak to anyone from the unions or social movements who had successfully organized the event. As I made my way back to Mané Garrincha stadium, away from the slowly advancing front lines of rock throwers and military police, I heard random bursts of gunfire. I assumed at the time that it was rubber bullets but it turned out that some police were using live ammunition. There were military police helicopters flying low overhead and I was hit with a cloud of tear gas and temporarily blinded. As I was cutting through the bus station a group of jack-booted riot control police appeared out of nowhere, body slamming a teenage anarchist girl to the ground. I turned a corner and found myself face to face with a tonfa stick wheeling policeman. I raised my hands in the air and he quickly decided not to use it on me, but nearby one of his coworkers was pepper spraying a middle aged woman in business attire in the face. I cut back through the bus station and walked into a cloud of vomit gas. After dry heaving for about a minute, I made my way up a hill, set my camera up and filmed police officers firing tear gas grenades directly at union members who were trying to peacefully walk back to their buses. I arrived back at the bus, coughing up tear gas, to hear Gegê say that the protest was a success and the next step will be a two day, national strike, which will paralyze the country’s economic activity and certainly not be given the coverage it deserves in the capitalist media.