TV Folha’s video which was pulled from air.

I am in São Paulo’s booming Pinheiros district, watching police cars circle around Fernão Dias Paes school. A group of nervous looking teenagers sit in front of the entrance gate.

“They are watching us”, says Alexander, a high school student camped out in one of São Paulo’s 200 occupied state schools in a massive and growing protest against closures, “they mark us and when we leave the grounds they drive up and beat us up. It’s already happened to me once.”

Later, while drinking a cup of coffee around the corner at the back of the school, two cops stand around with their hands on their holsters. Three laughing teenagers run by and one of the officers pulls out his gun, glares, then returns it to his holster.

There is an old saying that you can divide the economy of Latin America into four equal parts: São Paulo state, the rest of Brazil, Mexico and the rest of Latin America. Although this may be an exaggeration these days, São Paulo continues to serve as Brazil’s economic engine. Home to roughly 20% of the Brazilian population, it’s 2015 state government budget of R$204 Billion is larger than the federal government budgets of most countries in Latin America and last years’ state GDP of $806 Billion was larger than Turkey’s.  All of this money, however, hasn’t enabled the PSDB party to provide the basic infrastructure necessary for the São Paulo to function.  Over the past two decades successive PSDB governments squandered $ 3.6 billion in failed attempts to clean Tiete river – so clogged with sewage that first time visitors often complain of nausea.  A series of corruption scandals involving the state government and multinationals like Siemens have crippled the metro and train system, with investigations into the matter put on the back burner by a partisan state judiciary.  In a city that has steadily grown in population for the past 20 years, governor Geraldo Alckmin rerouted water company profits to private investors instead of expanding infrastructure, then lied about the impending water crisis during last years election season. This resulted in the current situation where residents of a city surrounded by rainforest on three sides are forced to ration water, while food and beverage giants like Coca Cola, JBS and AMBEV continue to receive it normally. Although some northern media tried to blame the crisis on drought, the UN firmly places the blame on governmental mismanagement.

In Brazil, public education is the responsibility of both city and state governments. While São Paulo’s city government schools are among the best in the nation, State schools have been deliberately left to crumble. Last year, 6 months after governor Alckmin announced construction of 49 new prisons, the government announced it didn’t have enough money to pay for toilet paper in its public schools, despite being able to lavish hundreds of millions of dollars on a  illegally contracted white-elephant monorail system which currently only has two stations.

On October 9, Governor Alckmin announced the closing of 93 public schools in the greater São Paulo area in the name of “fiscal responsibility”. Thousands of students like 9 year-old Jennifer Lima from the Jardim Fontalis neighborhood on the city’s periphery who currently walk to school every morning will now have to take crowded city buses for up to an hour each way to get to their newly assigned, overcrowded schools.

Alckmin’s announcement led to a student uprising that continues to grow. Groups of kids are occupying schools. Starting with a dozen the first week, there are now over 200 state schools paralyzed by students camped out in their yards and creating their own autonomous classes in the school buildings. This Monday, the government announced it was going to send in the military police to clear them out. 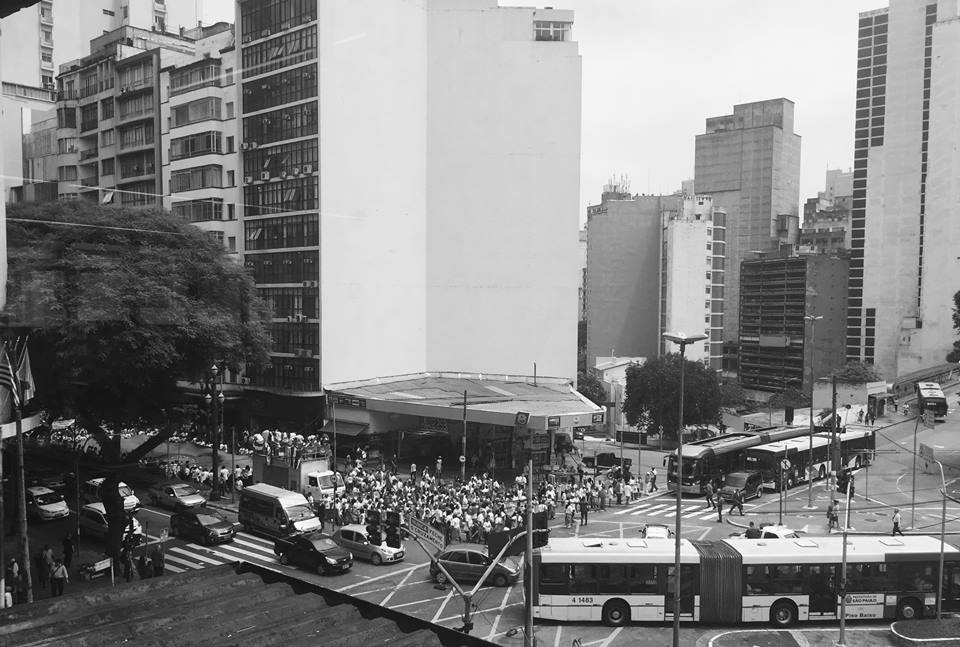 Small groups of protesters are shutting down rush hour traffic on key avenues holding up placards protesting the state government and a series of larger street protests is starting up. Last night, military police illegally opened fire with tear gas grenades on a group of  thousands of teenagers on Nove de Julho avenue. 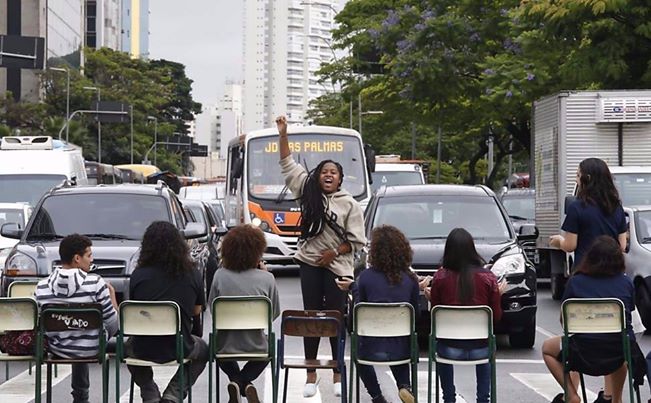 Tonight, students will join together again on Avenida Paulista. Brasil Wire will continue to cover this issue with daily blog entries as events develop. 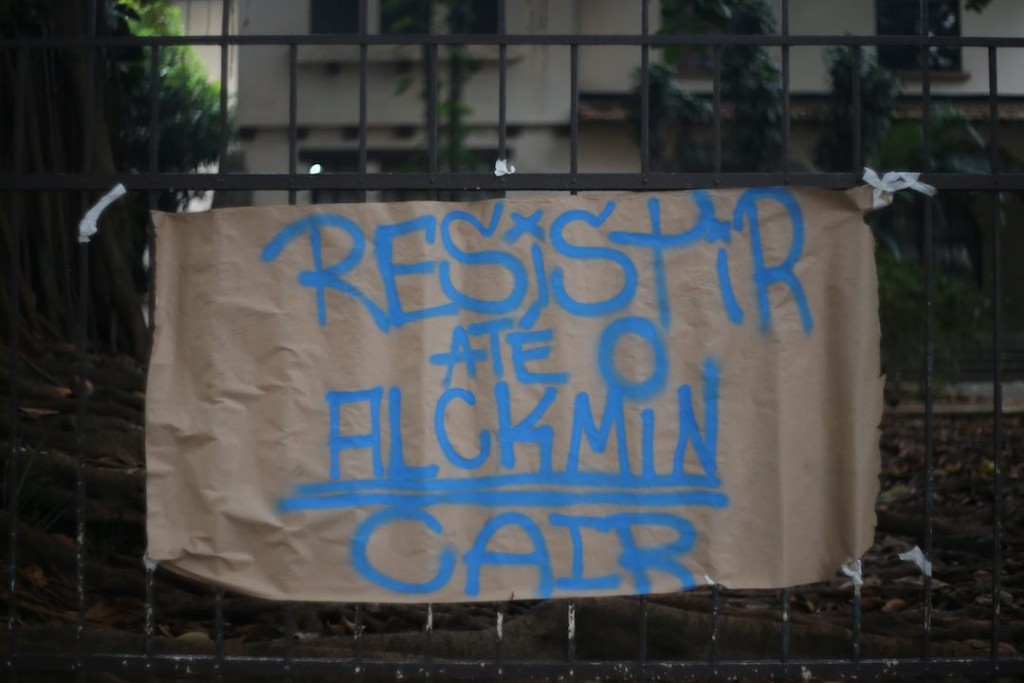 Rapper Criolo has declared his full support for the students and will take part in a special ‘Virada’ on 6 & 7 of december, where artists have volunteered to perform at occupied schools across the city.

Censorship: Revista Forum reports that at the request of Governor Alckmin, Newspaper Folha de São Paulo removed the mini-documentary video at the head of this piece from the air. It remains accessible here & elsewhere.

The Public Ministry has launched an action to prevent the State of São Paulo’s programme of school closures (reorganisation).

Daily early morning & evening protests by the students blocking major roads through the city have been met by instances of Military Police brutality. Excellent sources of Photo, Video documentation and other material can be found here & here. 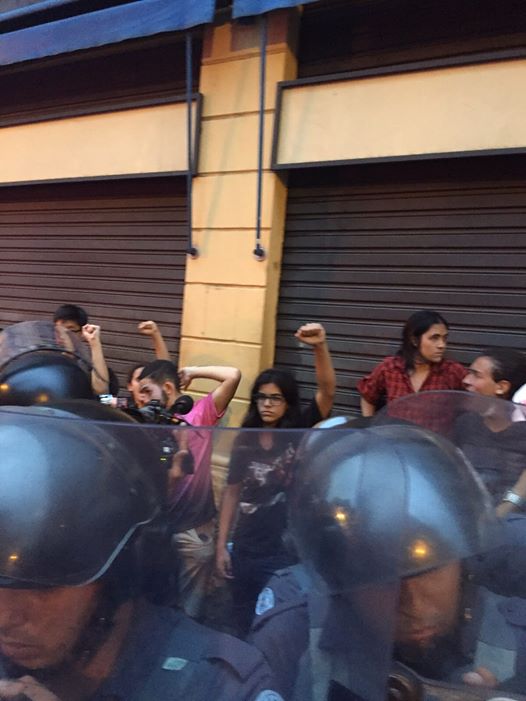 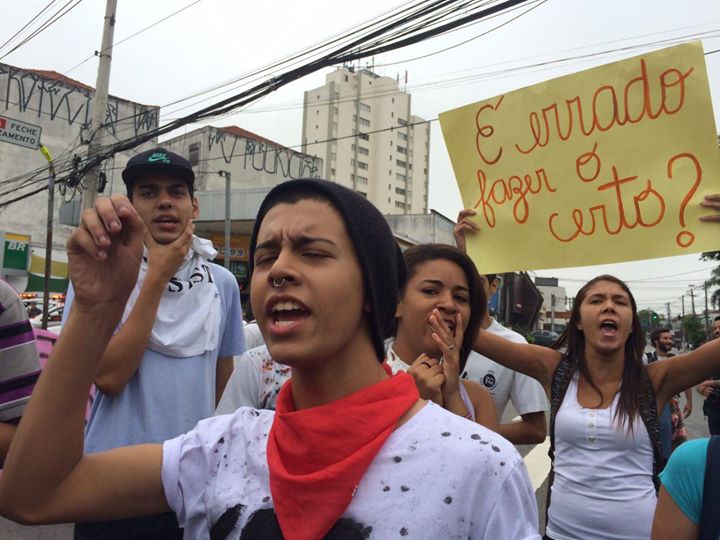 Governor Alckmin has announced a suspension of school closures “until 2016” leaving protesters skeptical. However, Herman Voorwald, his Secretary of Education since 2011 has left his position.

Despite this news, organisers are insisting the occupations, and tomorrows protest on Avenida Paulista will continue. Daniela Scromov, the prosecutor who started legal proceedings against the closures (“reorganisation”) has advised the students to remain at the schools. She is reviewing Alckmin’s proposal for authenticity, if it does not satisfy that she will continue with her legal action against the State Government. 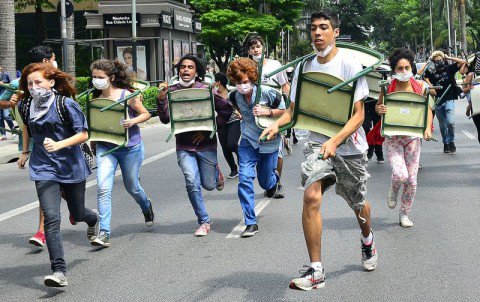 Despite Governor Alckmin’s pledge yesterday, organisers of occupations have said that they will continue until the following conditions are met by State Government:

In this radio feature on THIS IS HELL, Brian Mier talks about the School Protests.

Last night, on December 9th, a group of 15,000 high school students marched through the streets for three hours, from the MASP modern art museum on Paulista Avenue to the State Government’s education ministry.  Stopping along the way for communication of demands and plenary voting on protest route choices, the students made it clear that they are not going to stop protesting until PSDB governor Geraldo Alckmin puts his promise to cancel the planned closing of 94 public schools in writing. Alckmin, who recently polled at historic lows in popularity, has lost the trust of the majority of the São Paulo public, especially after spending last year’s election season promising that there was no water crisis and that there would be no water rationing in 2015, despite warnings to the contrary from experts and international agencies such as the United Nations.  During the protest the students also demanded that all police who have committed acts of aggression against students peacefully exercising their democratic right to public education be punished. In events remnant of 2013, much smaller groups of activists appear to be starting to take a free ride on the student protests. The tiny group of 4 or 5 so-called “black block” anarchists that we witnessed during Saturday’s protest appears to have doubled with local TV networks disproportionately focusing coverage on them, immediately followed by footage of police opening fire with tear gas grenades on student protestors as they approached the state ministry of education. After the tear gas cleared and most students went back to their occupied schools to regroup for the next protest, a small crowd remained. How many of them were protesting students is not known. Local news sources which greatly downplayed the size of the protest highlight that several garbage cans were lit on fire a few people were arrested at this point, with Globo claiming 9 and independent media source Rede Brasil Atual reporting 3, including two high school students.

As the protests continue to increase in size rumours of 2013-style infiltration by agent provocateurs circulate. As one social movement activist told me last night, “Alckmin sends people into the occupied schools to break things, then the media shows up and uses this to criminalize the students.”