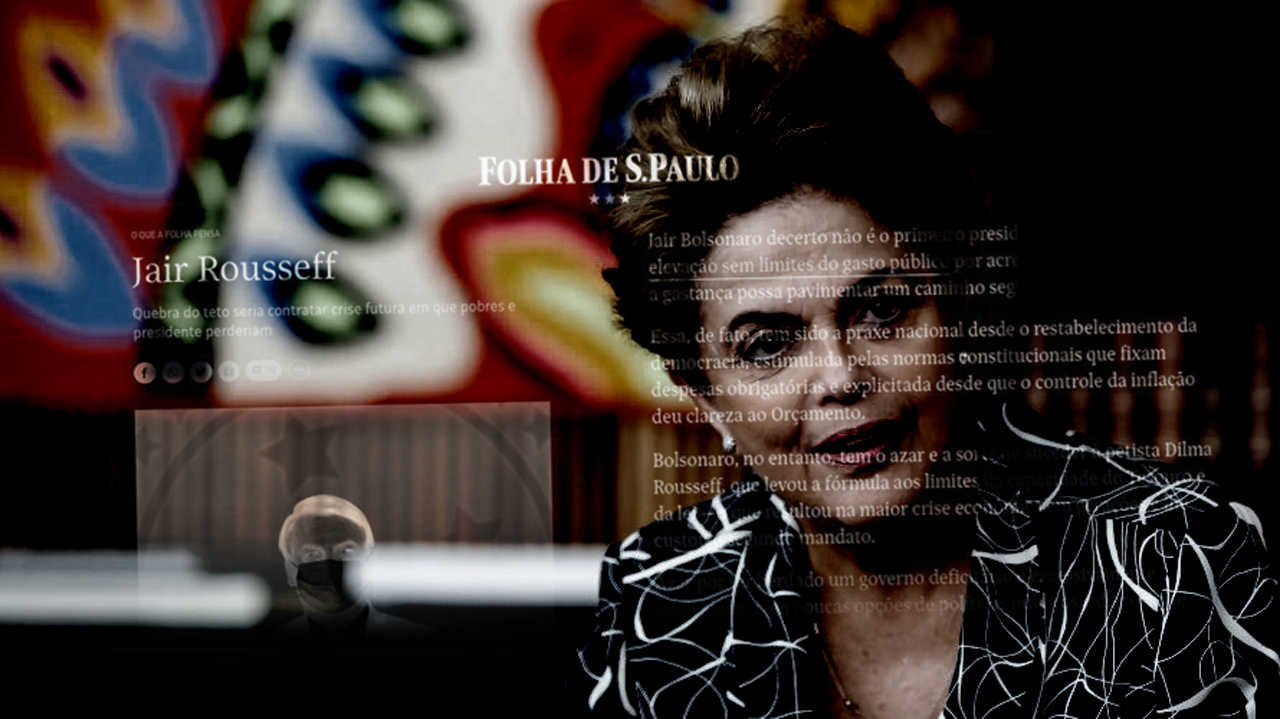 “Jair Rousseff”: Tone-deaf Folha and the pernicious myth of a broke Brazil

On Friday 21 August, Folha de S.Paulo, one of Brazil’s biggest and most influential newspapers, ran an editorial entitled “Jair Rousseff”. It provoked an immediate backlash with any commentators since stating that they were abandoning Folha altogether.

In the editorial, Folha equated the public spending record of Dilma Rousseff with that of Jair Bolsonaro.

It was at Rousseff’s impeachment vote in congress in 2016 that Jair Bolsonaro, flanked by son Eduardo, dedicated his vote to Colonel Brilhante Ustra, the man responsible for her rape and torture during the military dictatorship, and Bolsonaro’s speech was effectively the launchpad for his neofascist presidential bid two years later.

While most were first incensed by the gross insensitivity of the headline, the editorial also demonstrated the continuity in economic policy between the post-coup Temer administration and that of Bolsonaro/Guedes. It also re-emphasised Brazilian elites’ favour for such ultraliberal economic policy, even if enforced by a far-right militarised government which idolises the 1965-85 dictatorship.

Prior to the 2018 election, an editorial in Folha’s main competitor, the more overtly conservative Estadão, called the second round presidential runoff between Bolsonaro and the centre-left Fernando Haddad “A very difficult choice” in the heading of its pre-vote editorial. Many put Folha’s latest in the same category. Other media groups such as Globo, which explicitly supported the coup of 2016, are now accused trying to keep the economic programme of Guedes and merely jettison the unseemly Bolsonaro.

Most of all, the editorial exposed the pernicious myth of a “Broke Brazil” which underpinned the 2016 coup, Temer’s austerity programme, and Bolsonaro’s rise to power.

The Temer government’s first move was to implement the “Bridge to the future” neoliberal programme, and he openly admitted that Rousseff had been removed for refusing to adopt it. With bridge to the future came PEC55/137, the so called “end of the world amendment”, a constitutionally enforced freeze on public investment in health and education which no government could touch for 20 years.

All of this was justified in the public sphere by the dominant myth that Brazil was “broke”, when it had effectively built up R$1 trillion reais in liquidity over the previous decade, intended to insulate the country against future economic shocks.

Barely anyone knew these foreign reserves existed and since Bolsonaro and Guedes took office, billions of dollars have been sacrificed to sustain the Real on currency markets.

Economist Renata Lins remarked: “The worst thing about this political horror perpetrated by Folha de S.Paulo against Dilma, associating her name with that of a confessed fan of her torturer, is that it is in the name of defending economic horror: maintaining the spending cap which kills and excludes the most disadvantaged, in the midst of a crisis, in the middle of a pandemic.”

Dilma Rousseff issued a robust statement in response to Folha’s editorial, and requested right of reply from the newspaper:

“Folha has enormous difficulty in evaluating the past and, thus, it frequently makes mistakes when analyzing the present.

It was because of a poor assessment of the past that the company has so far failed to explain why it allowed some of its newspaper distribution vehicles to support repressive forces during the military dictatorship, as stated by the National Truth Commission report.

It was because it did not know how to judge the past that it committed the cowardly act of calling a regime that annulled, censored, closed Congress, suspended elections, expelled hundreds of Brazilians from the country, illegally arrested, tortured and killed opponents, a “ditabranda” (soft dictatorship).

Folha’s most serious mistakes, like these, are not in good faith. They are deliberate and ethically indefensible. I want to make it clear that I speak, above all, of the economic group Folha, and not of journalists.

I also want to remind of the publication, on the first page, of a counterfeit DOPS (Dictatorship-era Secret Police) record, which was identified by the newspaper as if it were mine, that an independent investigation showed was crudely montaged to support a false accusation by a fascist website.

Even unmasked by the proof that it was a fraud, Folha, maliciously, after admitting that it was wrong to attribute to DOPS a file obtained on the internet, acknowledged that all examination indicated that the file was a montage, but insisted: “its authenticity could not be ruled out. ”

Anyone who believes that social networks invented fake news is unaware of what was done by the mainstream press in Brazil – including Folha. It is not without reason that on social networks Folha earned the nickname “Falha (failure) de São Paulo”.

Today’s Folha editorial – under the title “Jair Rousseff” – is one of these deliberate acts of bad faith. It is worse than a mistake. It is, once again, a wicked distortion that confirms the newspaper’s factionalism. This crude and falsified conjunction is made to force a symmetry that does not exist and, therefore, nobody has the right to make, between a democratic and developmentalist president and an authoritarian, neofascist ruler, supported by the neoliberals – in this case, Folha.

All editorial claims about my government are fake news. Folha falsifies the country’s recent history, in a gesture of contempt for the memory of its own readers.

Repeat the false accusation that my government promoted excessive spending, an allegation manipulated only to support the media and political narrative that led to the 2016 coup. It deliberately forgets that the political crisis caused by the “the worse it gets, the better” coup players had great influence, either on the economic situation, or on the fiscal situation.

Folha, at that time, even asked for my resignation, in a front page editorial, even before the impeachment trial. It deliberately created an environment of political insecurity, paralyzing investment decisions, and deepening political conflict. Strangely enough, Folha never asked for the impeachment of the coup d’état Michel Temer, despite the evidence presented against him. Nor did it ask for Bolsonaro’s impeachment, even though he has already been caught in numerous acts of affront to the Constitution, and the newspaper itself holds him responsible for the seriousness of the pandemic.

Folha remains selective in its mistakes: It always fails against democracy, and now pretends to support it with the bizarre campaign slogan: “dress in yellow”.

A country that, in 2014, registered an unemployment rate of only 4.8%, practically full employment, with international shielding secured by a record US$380 billion in reserves, was not broke, as the opposition still claims.

In fact, the dismissal of the president required the endorsement of the mainstream media to ensure the spread of this fake news. My mandate had not even begun and impeachment was already the leading story in the media, with the sabotage of congress by Eduardo Cunha.

The data shows that the “fiscal irresponsibility” attributed to me is a malicious lie, it was a false argument to support the ongoing coup.

As soon as they took power illegally, the coup plotters took advantage of their majority in Congress, the support of the media, and the market, to approve a constitutional amendment for the public spending cap (the so called “End of the world amendment”), one of the biggest attacks ever committed against the Brazilian people and democracy in our history because, for 20 years, it removed the people from the budget and public spending decision-making process.

This created a “straitjacket” for the economy, barring investment in infrastructure and social spending, and “constitutionalizing” austericide. The spending cap blocks Brazil, prevents the country from emerging from the crisis generated by the neoliberal perversion which took power with the 2016 coup and the arrest of former President Lula. And with the pandemic, any way out, with the growth of jobs, income and development, will become even more impractical.

If Folha’s intention is to protect and pressure Bolsonaro to deliver neoliberal devastation, it should at least have the dignity of not falsifying recent history. Learn to evaluate the past and admit your deliberate mistakes, if you want to have some authority to analyze a dark present whose construction you directly participated in.

On Obama, Lula and Tammany Hall

Brazilian elections – A day of shame for the far right

US Election: What’s at stake for Brazil