It is not just the Brazilian President and his followers’ flat-earthism that prevents Brazil overcoming the pandemic and the crisis it has generated. Sociopathic neoliberalism and its prioritisation of economic dogma over public safety, threatens everybody.

The social isolation guidelines established by science and by the World Health Organization in the fight against Covid-19 work.

Without a vaccine, they are the only things that do.

All of the countries that have adopted them, even if done in a late or disorganized manner, have managed to reduce the new number of cases and deaths after a few weeks.

Spain, which reached a point of around 10,000 new cases per day in April, now has around 600. Italy, which delayed in starting horizontal isolation, reached the point of 6000 daily cases but after weeks of its late starting lockdown, it is now averaging less than 600/day. New York City, caught in the middle of Trump’s  flat earther sanitarianism  and the lack of a public health system, reached a level of 8000 new cases of Covid-19 per day and became the World capital of the pandemic. Today, the number of new daily cases is at around 1000 and falling.

China, where everything started, reduced the number of new community transmitted cases to 0 in a little over 2 months. The socialist countries are teaching lessons on competence to most capitalist countries when it comes to Covid-19. In addition to China, Viet Nam and Cuba are serving as examples to the world. Viet Nam, a country with nearly 100 million inhabitants that shares a 1400 km border with China, has only one case per 15,000 residents and one death per 300,000. Cuba, a small and poor island which is submitted to economic embargoes, has one death per 143,000 inhabitants.

But in the USA, the wealthiest capitalist country, there is now one death per 3720 inhabitants. Wealthy Switzerland, the land of financial liberalism, has one death for every 5316 inhabitants. Other wealthy countries in Europe have similar numbers.

It looks like Covid-19, contrary to what our folkloric foreign affairs minister says, is not a “communovirus” but a “capitavirus” because it spreads much faster in the atmosphere of social inequality and neglect typical of capitalism.

In all cases, both in socialist and capitalist countries, social isolation is the best way of containing the advance of the pandemic, preventing the collapse of health systems, saving lives and reducing economic damage. A quick glance at WHO data proves this.

There are, however, people who disagree. Scientific geniuses like Trump and Bolsonaro, who have graduated from the Facebook medical institute, with doctorates in fake news from the University of WhatsApp, prefer to treat it as the spreading of a little flu in a shower of hydrochloroquine.

Afterall, according to their humanist perspective it doesn’t matter if hundreds of thousands or millions of people die, as long as the economy functions without mishaps or excessive spending. The best thing to do is let “natural selection” run its course until herd immunity is achieved. The richest and the strongest will survive.

Fortunately, a good part of the Brazilian state governors continue to follow the recommendations of actual scientists. Supported by Congress, by the Supreme Court and by the opposition parties, they have managed to prevent the worst from happening.

In fact, although the absolute data are very frightening, and rightly so, the data on the percentage growth of new cases of COVID per epidemiological week seem to finally begin to point to a possible reduction in the average percentage growth in the country.

The first cases were recorded in the 10th epidemiological week.  During the first two weeks on the following chart, epidemiological weeks 11 and 12, there is an exponential growth. Between the third week and the seventh week, however, there is a sustained reduction in the growth percentage in relation to the previous week, which decreases from 176% to 39%. However, there is a rebound in the eighteenth week, when the percentages rise again. 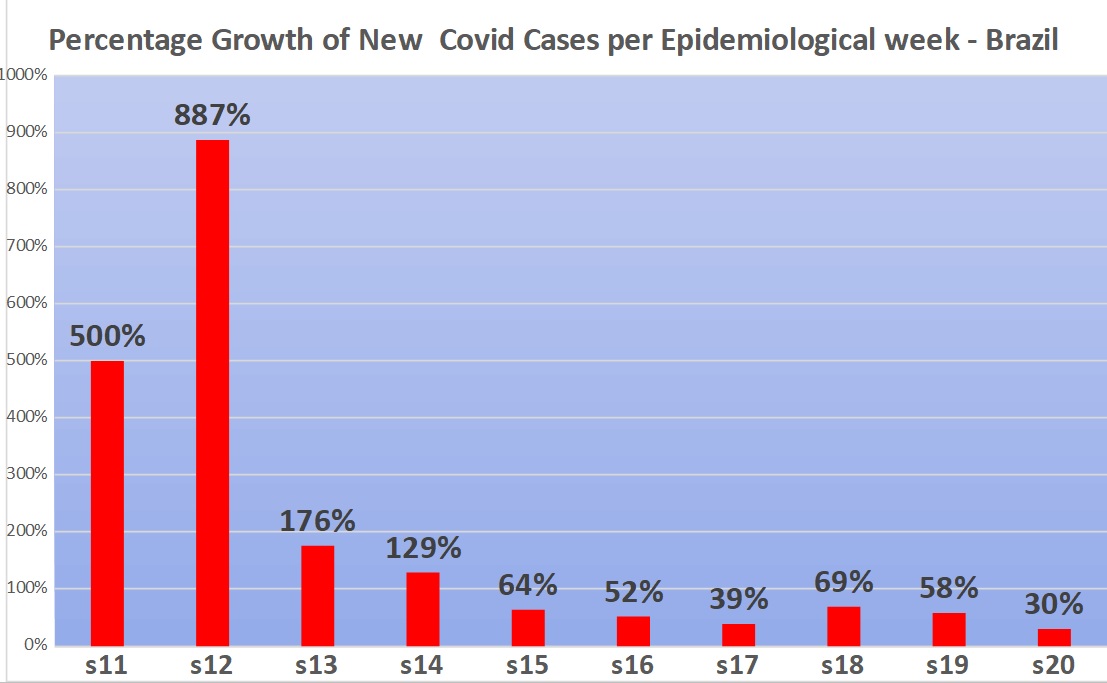 During the 20th week, growth fell to 30% (77,000 cases compared to 59,380 the previous week) the lowest yet. If this last downward trend in the growth percentage over the last two weeks is confirmed, it is possible to imagine that there will be a stabilization of growth afterwards, followed by a reduction in the number of weekly cases.

In addition, it should be taken into account that the rate of contagion has been reduced from about 3 to around 1.4 during the last period. If it falls below 1, the epidemic will fade.

This shows that, although Brazil’s social isolation is only partial, the measures taken by the governors are working, even if they are far from ideal. If it were not for them, we would be much worse off.

Çetting the epidemic take its “natural course” until 70% of the population is contaminated (140 million people), thus achieving herd immunity as Bolsonaro and his team of flat earthers seem to want,  would cause the deaths of around 500,000 people in a few months. So far, we have had 16,000, which is bad enough.

Nevertheless, it is too early to define a trend. We are still in a gray zone of uncertainty during which the process can either gradually subside or quickly worsen.

The next few weeks, during which respiratory diseases will peak in Brazil, will be decisive. If social isolation and other measures are not only maintained, but strengthened, Brazil may overcome the pandemic without further increases to the unnecessary and excessive loss of life. So far, in percentage terms, we are in a better situation than several countries,  although things have been deteriorating. 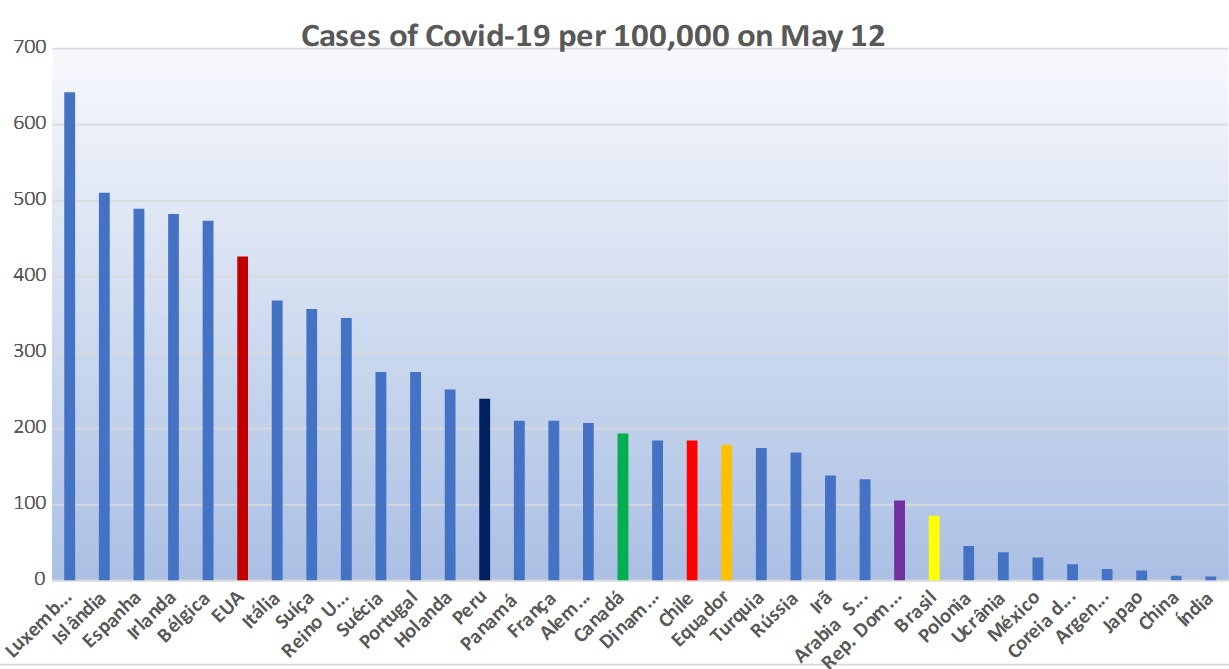 However, Bolsonaro, who is about to nominate a political doormat for Health Minister, could end all hope. Any lightening of the isolation measures will surely cause a great catastrophe – not only for Brazil but for the entire region, which already sees our country as a sick and threatening giant.

In realistic terms, extensive isolation measures will have to be maintained at least until the end of Brazil’s winter this September, until the trend in the epidemiological picture becomes clearer.

Bolsonaro is undoubtedly a major obstacle to Brazil’s ability to overcome the epidemic. But it is not just Bolsonaro’s and his followers’ sanitarianist flat-earthism that is an obstacle to overcoming the epidemic and the crisis it has generated.

There is another. More elusive, but more decisive obstacle: the anachronistic economic ultra-orthodoxy of Finance Minister Paulo Guedes.

A country like Brazil, that is extremely unequal and with a large number of people who are precariously and informally employed, needs much more robust economic measures to maintain horizontal isolation as long and as necessary. The little that Brazil has done so far to support the vulnerable, mainly because of pressure from the opposition, has consistently been  met with resistance from Guedes, who is more concerned with containing deficits than with containing death.

Bolsonaro knows this and makes hypocritical and opportunistic speeches defending workers  employment and income to pressure against horizontal isolation. In his speeches he pits fear of unemployment, misery and hunger to fear of death. The way he phrases it, the people have to choose between dying from disease or starvation.

Many people correctly speak of Bolsonaro’s clear sociopathy. But few realize that the greatest and most damaging sociopathy lies in orthodox austerity policies which inevitably cause a brutal increase in inequality, unemployment, extreme poverty, precarious work, hunger, abandonment and insufficiency in public services, including health.

Before the pandemic even began these policies had already led to 12 million unemployed.

These policies are putting Brazil back onto the UN World Hunger Map. These policies have already pushed 28 million Brazilians into precarious, informal work environments. The labor law reforms have enabled Brazilians to work without basic rights. The retirement reforms have ended millions of Brazilians’ right to retire with dignity. The constitutional amendment freezing health and education spending has gutted public services, including health.

Without the elimination of these sociopathic policies and this anachronistic mentality, Brazil will not only fail to fight and contain the epidemic, but will be unable to overcome the economic crisis that it has exacerbated but that was underway long beforehand.

Marcelo Zero is a sociologist, international relations specialist and technical adviser to the PT Senatorial leadership.