A coalition of 6 urban social movements demands the resignation of Paulo Guedes who was recently exposed in the Pandora Papers as profiting personally from his policy of devaluing the Brazilian Real.

On Monday, October 4, I arrived at the Belém metro stop in São Paulo and met members of one of hundreds of community based, working class housing movements associated with the National Peoples Housing Union (UNMP) – Brazil’s second largest social movement after the MST.

I had been invited to a protest in Brasília that was coordinated offline by 6 of Brazil’s largest urban social movements, and buses were pulling up to take us on the 18 hour drive to the nation’s capital. It was going to be a bate volta, meaning we would drive all night, spend the day protesting and return back that evening – a  grueling 36 hours of bus travel during a 48 hour period.

The buses were hired for by one of São Paulo’s labor unions. The unions took a big financial hit after the 2017 butchering of federal labor laws transformed the nation into a right-to-work country but are still able to show some level of solidarity with the social movements. Everyone was required to show proof of vaccination to get on the bus and food, water and N-95 masks were provided to all.

I looked around on the bus and was pleasantly surprised to see a lot of young people. Most members of the urban social movements have traditionally been poor, middle-aged, single moms, but I saw young working class LGBTQ+ couples and scattered people in their 20s,  showing that the political formation work the movements  with youth that the movements refocused on after the coup is finally coming to fruition.

After a long afternoon and night of barreling though endless fields of cattle raised almost entirely for the export market, we arrived at the Oscar Niemeyer-designed National Cathedral on Brasilia’s esplanade. 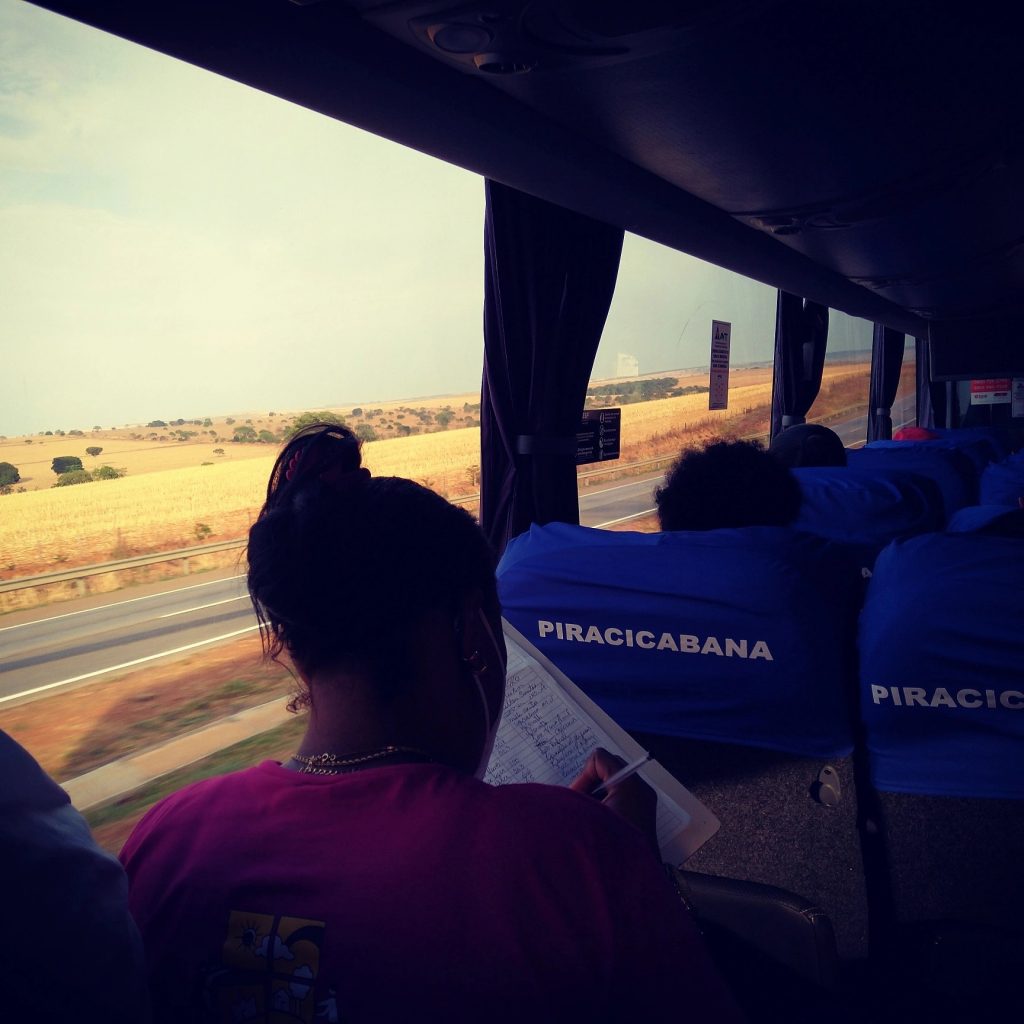 Neimeyer was a great architect but he didn’t seem to care much about shade. The sun was blazing and as I stepped out onto the burning hot, treeless sidewalk in front of the National Cathedral. I saw  groups of activists huddled under tiny patches of shade behind the modernist statues of the 7 Evangelists. 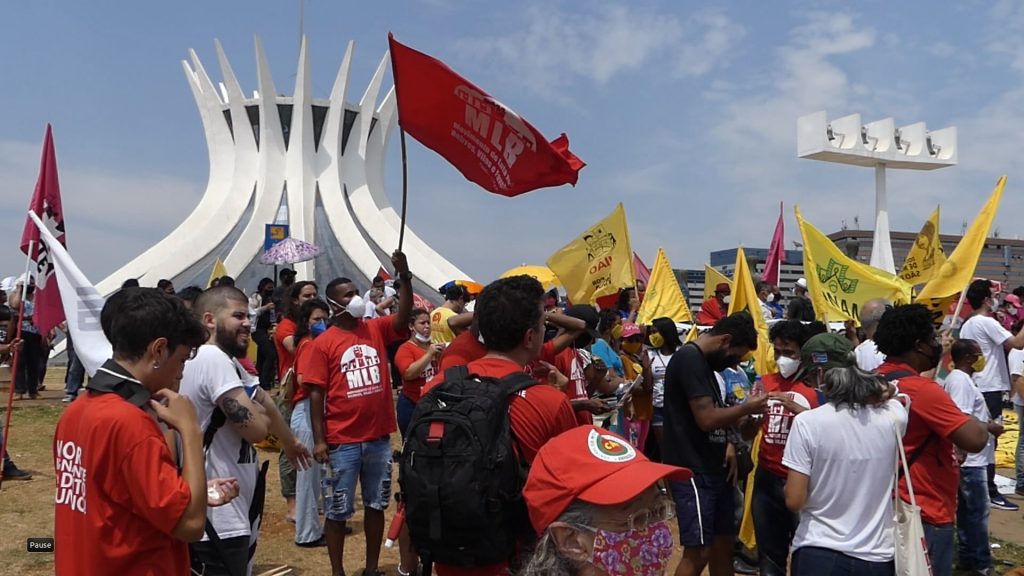 Beautiful architecture, Oscar, but where are the trees?

There were two newer, working class social movements present but most were older movements which rose out of the successful fight to create a amendment 182 to the 1988 Constitution. That amendment, ratified through delivery of a physical petition with over 1 million signatures on it,   guarantees the right to squat in empty tax-scoflaw properties and requires local governments to convert them to ownership-based low income housing.

As is frequently the case when the housing movements meet in Brasília, the São Paulo-based MTST led by 2018 Presidential candidate Guilherme Boulos did not participate. During the PT presidencies, the MTST refused to participate in the Federal Ministry of the Cities assembly system, which turned  power over urban policy to a system of 5000 voluntary delegates from the unions and social movements.  A long standing gripe against the MTST often heard behind the scenes from leaders of the other urban social movements is that its supporters criticized them as being sellouts for participating in the PT government’s national public housing program,  but it had no ideological problem competing with them in public bids for federal funding provided by these programs.

As the movement members gathered in front of a sound truck, drinking water and coffee and eating fruit, I bumped into Evaniza Rodrigues from the UNMP and asked her what the strategy for the day was. 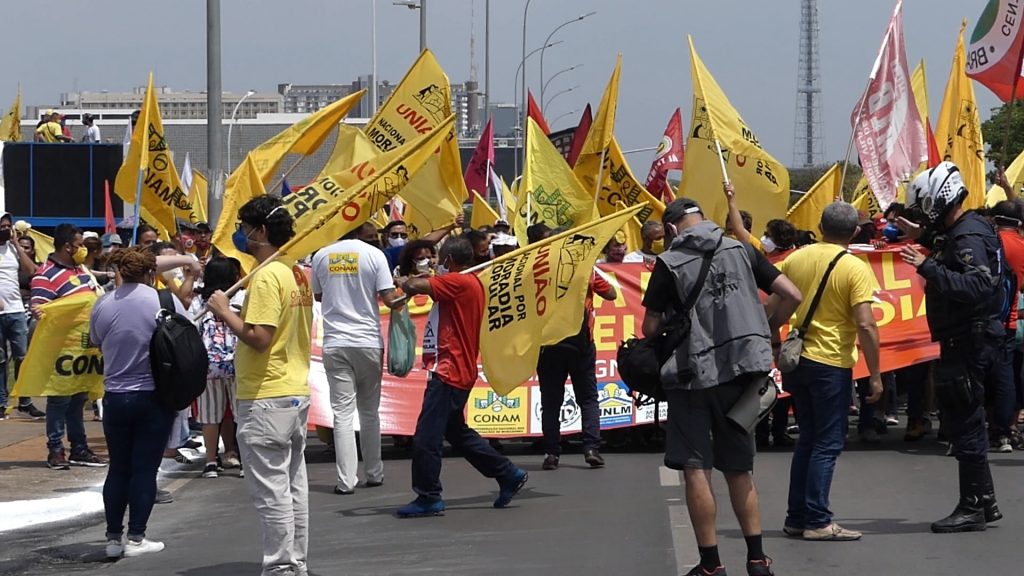 “First, we are going to March on the Ministry of Regional Development, which has cut social housing funding by 95% since the coup,” she said. “We already know they are going to receive a delegation of ours. And we know they are going to apologize and tell us it’s all Finance Minister Paulo Guedes fault and they can’t do anything for us. So, we are going to have a small ceremony remembering the 600,000 dead from Covid 19 and then we are going to march to the Finance Ministry and demand an audience – which we are pretty sure isn’t going to happen. Then we’ll have lunch and march over to the Caixa Economico (Public Mortgage Bank), where the union has set a stage up for us and we are going to protests against Guedes’ privatization plans. Then, at the end of the day, we are sending a delegation to Congress to register an official request for a law establishing guidelines for non-profit, self managed autonomous, ownership based social housing construction. Our hope is that our request, which was designed by the 6 social movements collectively, will be submitted as is as a bill by one of our allies in Congress. We are pretty sure it won’t pass, but the strategy is to get people debating the concept of self-managed social housing construction on the floor of Congress – to insert this issue, which has disappeared since the 2016 coup, back in the debate. We hope that this debate will also push them  to finish all the social housing construction projects underway that have been stalled since Michel Temer took office. There are thousands of poor families in limbo still waiting for their housing because of this.”

Minutes later the march began as the Military Police shut down two lanes of the Esplanade, meeting a formal request that was filed with the mayor’s office 2 weeks before the protest. From his position on top of the sound truck, Christiano Shumaker, a long haired Gaucho from the Movimento Nacional de Luta Pela Moradia (MNLM), spoke of the hypocrisy of a finance minister who deliberately profited from his own devaluation of Brazilian currency by depositing millions of dollars in secret offshore accounts in the Virgin Islands, while millions of Brazilians can no longer afford cooking gas.

As the sound car arrived in front of the Ministry of Regional Development, a group of activists charged to the front door, blocked it off and yelled, “Out with Bolsonaro, food on the plate”. As the rest of the crowd moved towards the door, a representative of the Ministry came out and agreed to allow a delegation to come in and talk. In a situation that reminded me of a story on the importance of pragmatism in  Saul Alinsky’s Rules for Radicals everyone already knew this was going to happen. 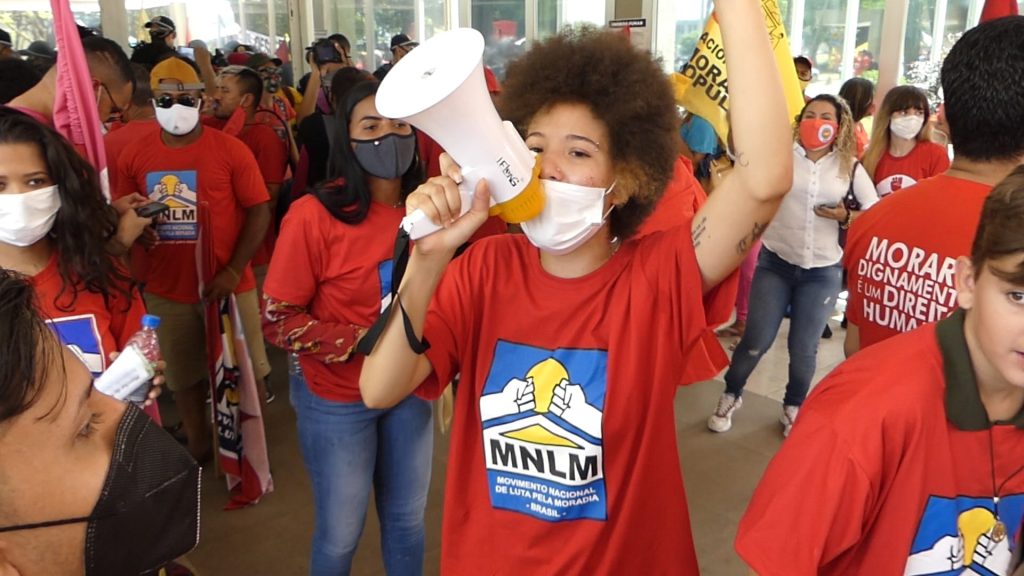 Activists at the door of the Ministry of Regional Development

From there we marched across a burning hot field of yellow grass to the Finance Ministry where the reception was a lot cooler. 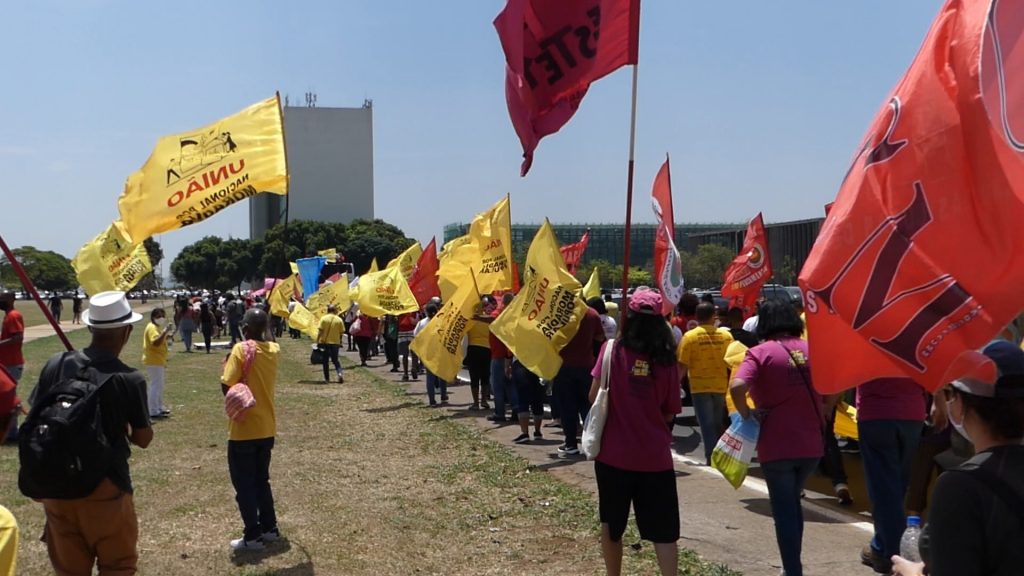 The advance group charged the front door but was blocked from entering by a group of military police. As the sound car rode up blaring its message of Guedes hiding R$51 million in a Virgin Islands tax haven while millions of people are going hungry, we looked up and saw group of his staff through a fourth floor window in the Ministry Building. One of them stuck his arm out of the window and gave us the finger – a sign that, at the very least, we were bothering him to the point that he lost control of his behavioral filters. For the next two hours, a crowd of 1500 sat down in and around the Ministry’s two front doors, forcing employees to use the service entrance as the sound truck blared protest songs and accusations of criminal behaviour by Paulo Guedes and Jair Bolsonaro. 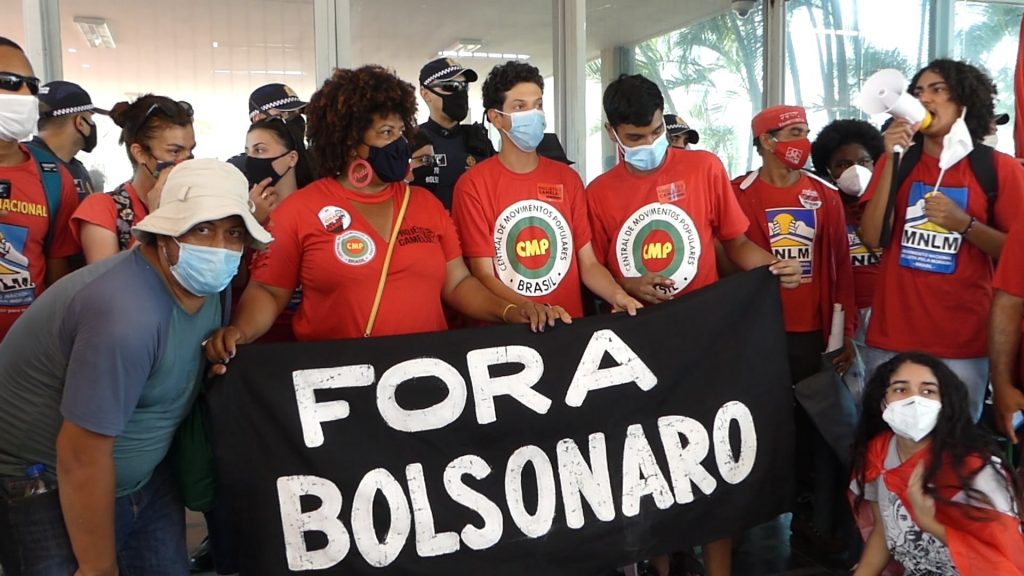 Blocking the door to the Finance Ministry

I decided to get a head start and make my move to the Caixa Econômica bank headquarters, knowing I could edit video in their lobby on my notebook computer. On the way, I had a few thoughts about big street protests which the CUT union federation has been saying for years that, due to the ease with which they can be manipulated, are useless in creating social change unless the are combined with other tactics.

Since the social media-orchestrated mega-protests associated with the Arab Spring began over a decade ago, it seems like there has been an overemphasis placed on protest size. Even though Brazil’s largest anti-Military dictatorship protest ever was called the March of 100,000, some people in the bourgeois left now refer to protests that “only” have 100,000 in them as failures. 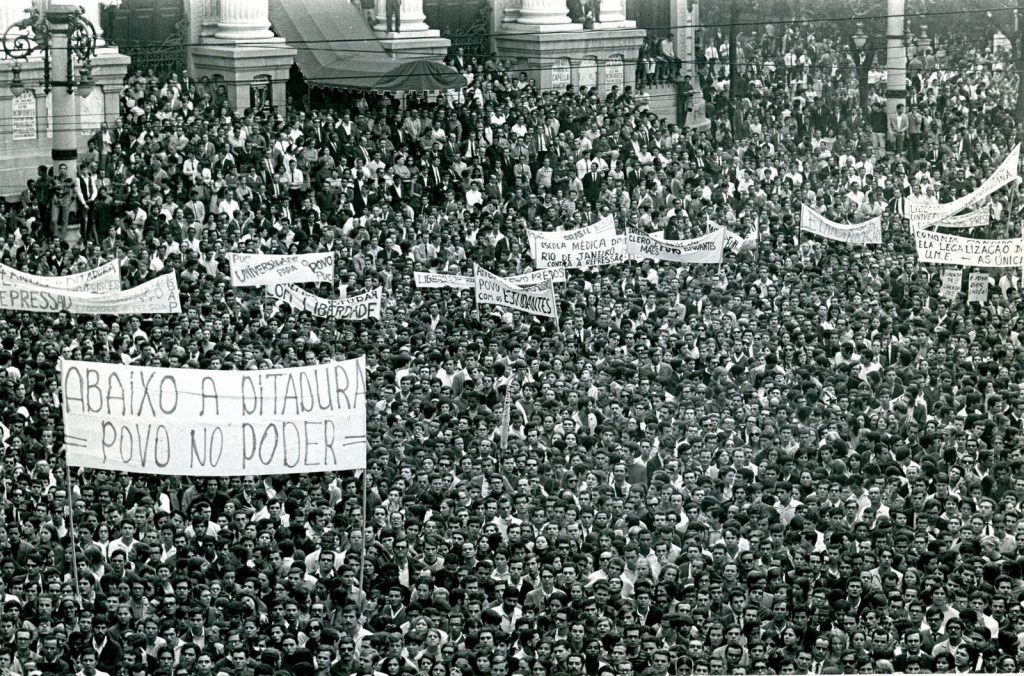 Smaller protests that are organized with clear objectives can be just as, or more effective as the huge ones – especially if they are not coordinated over right wing social media platforms like Facebook, that give political enemies and mainstream media outlets all the information they need in advance to discharactarize, water down or hijack them.

In 2018, the Ele Não (Not Him) protests against Bolsonaro had huge coverage in the international media with celebrities like Madonna joining in. I was there and left that day feeling euphoric, but the end result was that women’s support for Bolsonaro increased because Steve Bannon, Carlos Bolsonaro and the Koch-Brothers supported PR actors from the Free Brazil Movement had advance notice to come up with a successful counter strategy – bombarding Christians on WhatsApp with photos of topless women kissing from unrelated slut walk and FEMEN protests and telling them that was happening right then and there in Ele Não.

Likewise I noticed a carnaval like atmosphere during my coverage of the right wing pro-Bolsonaro protest in Brasilia on September 7. Entire families dressed in green and yellow ate ice cream together, cheered military jets as they flew overhead and prayed for Jesus to do bad things to former President Lula as if they were at a big, fascist state fair.  With the bourgeois media that once supported him now turned against him, Bolsonaro’s disapproval rating grew by 8% in the week after these protests. 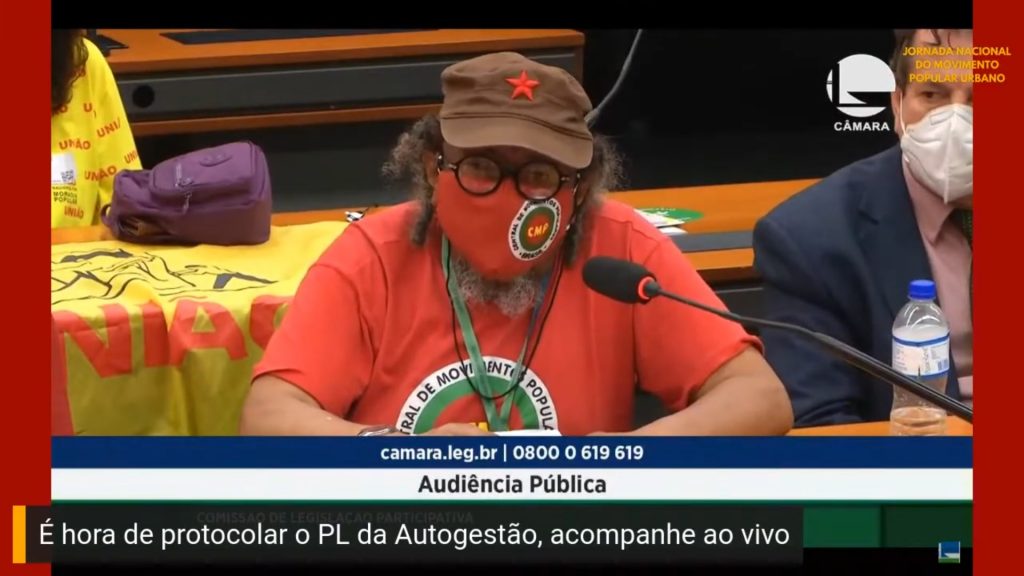 Gegê, former anti-dictatorship freedom fighter and national leader of the CMP, speaks on the need for self-managed, autonomous social housing construction in Congress on October 5, 2021

Our day in Brasília came to a close with a televised, 2 hour session of Congress debating a new bill that would regulate and fund self-managed public housing construction, complete with speeches by social movement representatives, sympathetic university professors and members of Congress. The goal of the movements to reinsert the housing issue into the public debate succeeded, and it looks like their suggested text will be introduced as is and make it to the floor for a vote. There, even though it may not fully succeed it will probably force the government to restore some of  its social housing budget.

In conclusion, Tuesday’s urban social movement protest in Brasilia may have had a more timid set of goals than the national, “Out with Bolsonaro” protests but for now it looks like it has more of a chance of reaching them.

Note: One day after this article was first published on October 7, 2021,  Brazilian Congress passed Law 14.216/21, banning all evictions, including in squats, until December 31, 2021 – another bill that was first introduced by the urban social movement coalition as part of its Zero Evictions Campaign.