Amid rumours that governor is lying about death count, Mayor Bruno Covas’ state of emergency seems too timid to prevent a catastrophe

On Tuesday, March 17, with 240 confirmed cases and 4 deaths officially registered in the city, São Paulo mayor Bruno Covas declared a state of emergency. He banned public concerts and gave public schools, malls and most stores until the end of the week to close. He lifted the city’s license plate based rotation system that limits the amount of drivers on the road during rush hour so that “everyone” would be able to choose the safer option of individual transportation to limit disease transmission. The massive public transportation system, with it’s 8 million daily passengers, would continue to run as normal for the rest of the week under the condition that buses are fully cleaned after each round trip journey. No contingency plan was announced for the city’s estimated 7000 homeless people who are over the age of 60 or have compromised immune systems. No plan was announced on whether school children will be able to continue receiving meals while schools are closed. No plan was announced on how small business owners and employees laid off due to the lockdown will be able to continue to pay their bills.

As suburbs in the 3 million strong ABC region began shutting down their bus systems and taking more intensive measures to limit transmission of the virus, São Paulo commuters flooded the social media with photos of overcrowded buses and trains. Candra Nogueira, a single mom who spends 4 hours a day commuting to and from her job as a clerk in a pharmacy, posted a photo of an overcrowded bus with no ventilation taken during her morning commute, “For the rich neighborhoods to lock down, the periphery has to work twice as hard. Quarantine is a class privilege that, evidently, does not apply to the workers, ” she wrote. 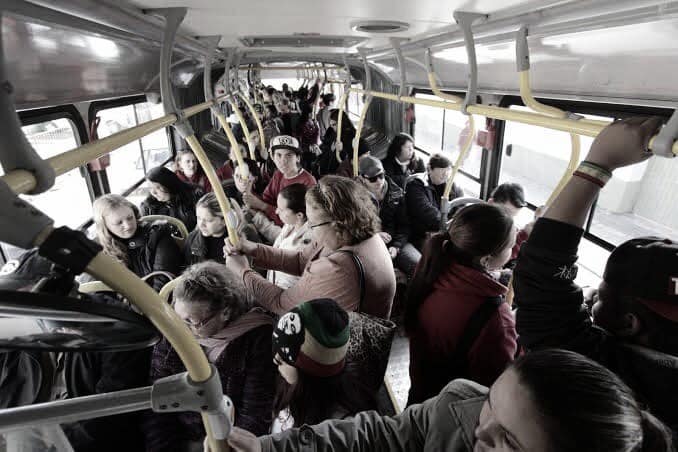 On Wednesday I went to a pulmonologist to find out if my recent recovery from bronchitis puts me at any special risk for coronavirus, since I am still having coughing fits. While waiting in the reception area I overheard the secretary talking on the phone about how the city’s ICU units are overflowing with coronavirus patients but the governor is ordering them not to release this information to the public. “9 patients died last night in one ICU ward alone,” she says.

The doctor called me in, ran a few tests and told me I was recovering fine, despite the cough. “Nevertheless,” he said, “I am going to ask you to self-isolate for 14 days. Not so much for health reasons, but because if you have a coughing fit in public you could be attacked by an angry mob.” At first I thought he was joking and I posted something about it on my Facebook page. Within minutes, three different friends told me they have seen people physically attacked in public in São Paulo for coughing during the past few days.

The next day I broke self-isolation to go to the local pharmacy. The streets in my neighborhood were as busy as ever – the local supermarket was packed. As I entered the pharmacy, carefully trying to keep the 1 meter distance from others, a man complained about not being able to find hand sanitizer anywhere.

“We have no idea when the next batch will arrive,” the pharmacist said.

“Why don’t you wash your hands instead?” I asked.

“I work outside all day,” he said, nervously, “I am an Uber driver. Washing hands is not an option. Some people can’t afford to stay inside all day.”

A friend, who is a nurse, shared an audio message from her hospital worker WhatsApp group . It was from a man proclaiming to be a hospital manager who said that Albert Einstein hospital, considered one of the best in Latin America, has run out of space to treat coronavirus patients. supposedly, a group of private hospital directors has made a deal with conservative governor João Doria to withhold information from the media to minimize panic, but they are threatening to go public if a lockdown isn’t implemented by March 23. The next day, Doria announced closure of all shopping malls and a slowdown of the train system.

Despite crippling budget cuts that began after the 2016 coup, Brasil still has one of the best public health systems in the developing world. The last time the nation was gripped with a global pandemic, AIDS, it implemented an internationally lauded prevention and treatment program that was significantly more effective in reducing transmission that of many european countries and the United States. Although the Bolsonaro administration is trying to gut the program for ideological reasons, Brazil still provides all HIV patients with free anti-retroviral medication, just as it provides free medication for a large number of other life-threatening illnesses. With its long experience fighting regional tropical disease pandemics such as yellow fever, malaria and chagas disease, and it’s comparitively high number of ICU units per person, you would think the country would be poised to set up an effective plan to contain the spread of the virus and treat the most serious cases of the illness.

Unfortunately, the rule of law broke down after the 2016 coup and we are now governed by a President who, as late as March 10, was still publicly proclaiming coronavirus to be a “media fantasy” that posed no risk to the people. The vacuum caused by federal government inaction has been filled by state and city governments with variations in approach and quality.

São Paulo has the world’s largest Italian population outside of Italy and, unlike cities like New York or Chicago, most of the population originated from the North. Before international flights were canceled today, there was a constant stream of people flying back and forth between São Paulo and Milan for business and family visits. In recent years it has also developed one of the largest Chinese communities in the Western Hemisphere. Entire sectors of the local economy have been taken over by Chinese business and organized crime groups in recent years.

If you add the federal government’s inaction to the timid, slow response at the state and municipal level and the constant flux of travel to and from world’s two largest transmission vectors, it looks like a perfect storm for coronavirus is brewing in São Paulo.