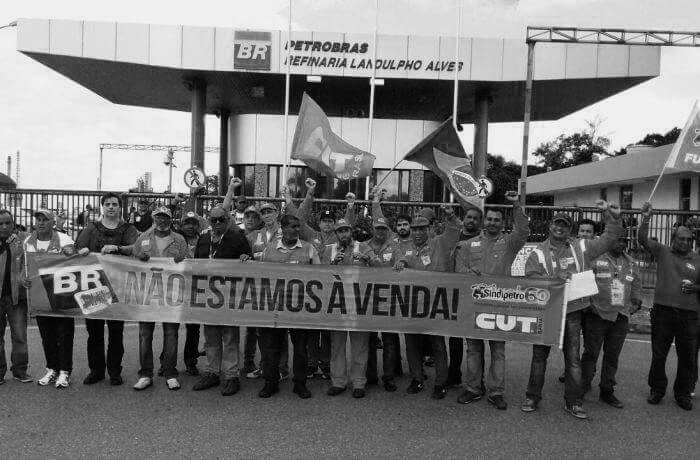 The warm up for the petroleum workers’ strike, scheduled to start on Wednesday, May 30th, is now underway with paralyzations, demonstrations and protests across the entire Petrobras system.

The strike will start this Wednesday, May 30th, and will last for 72 hours.

The General Coordinator of the Federação Ùnica dos Petroleiros (Petroleum Workers United Federation/FUP), José Maria Rangel, explains that the movement should have the total support of society because one of the main demands is for the reduction of gas, diesel and cooking gas prices.

“The government reduced operations in Brazilian refineries and this caused Brazil to start importing fuel derivatives. This, in turn, linked the prices here to fluctuations in the international barrel price for petroleum,” he said. “Brazil has a petroleum extraction, refinery and distribution system. It is absolutely unnecessary to increase petroleum derivative imports, as the Petrobras president Pedro Parente did when he implemented the new pricing policy in July 2017, which increased imports by nearly 25%.”

Rangel says that it is the Brazilian people who end up footing the bill when they buy cooking gas, gasoline and all the products that depend on transport or that are produced through use of petroleum derivatives.

“The current Petrobras administration, led by an ex-Minister of Fernando Henrique Cardoso’s who was nominated by illegitimate coup president Michel Temer (MDB-São Paulo), has destroyed the company,” he said.

The strike, which was authorized by a vast majority of the workers nationwide, is also against attempts to privatize the company. In April Parente announced the sale of refineries in Paraná, Pernambuco, Rio Grande do Sul as well as pipelines and Transpetro terminals, transport and fuel logistics subsidiaries.

“We want the price policy to scrutinized, that all privatizations are immediately suspended and that Pedro Parente resign from the Petrobras presidency,” said Rangel.

Rangel points out that 60% of the population is against the sale of this, the largest Brazilian state company. “The phase in which everyone was saying that Petrobras was corrupt and had no capacity to implement big projects is over. The population knows that this strike is fair because it is for reducing prices, against privatization and for the generation of jobs in Brazil and not in other countries, like China, which is what has been happening.”

The workers at Replan, in Paulina, and Recap, in Mauá, members the São Paulo state Sindepro Unificado union, crossed their arms today (May 28th), in solidarity with the truckers movement and against the daily fuel price adjustments imposed by Petrobras president Pedro Parente.

The paralyzation began at the beginning of the morning shift change. The night shift workers are remaining in the plant for the duration of the protest, which should last 8 hours. The union also expects the administrative sector to participate in the work stoppage. The nationwide strike will begin on Wednesday.

This article was originally published by the Central Única dos Trabalhadores (Unified Workers Central/CUT) and can be seen in its original Portuguese here.