This article was originally published in Portuguese on the blog of veteran Brazilian journalist Mauro Santayana 01.31.2015. Brasil Wire have chosen to translate and republish the article to add some factual and historical context to the current debate regarding the Brazilian economy in 2015. All views expressed are those of Mauro Santayana

For several months, and especially during the election, the internet was rife with messages using the generic title “O Fim do Brasil” (The End of Brazil), making the preposterous claim that the nation will break, that unemployment will increase and the country will return – from a macroeconomic point of view, to 1994 etc. – It is an irrational, superficial, uneducated and inaccurate narrative. In terms of economic analysis, more than the ongoing anti-national campaign & rumor-mongering, what matters are the numbers and facts. 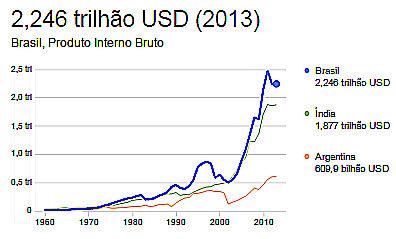 According to World Bank data, Brazil’s GDP rose from US$504 billion in 2002 to US$2.2 trillion in 2013. Brazilian gross domestic product grew, in dollars, more than 400% over ten years, a performance surpassed by very few nations in the world. To get an idea, Mexico, which is often celebrated as a darling of the emerging economies, did not even double its GDP over the same period from US$741 billion in 2002 to US$1.2 trillion in 2013; the United States grew around 80%, from just over US$10 trillion to nearly US$18 trillion.

In nominal terms, sales in supermarkets grew by almost 9% last year, according to Abras, an industry association, and retail, grew 4.7%. Business is doing ok? Online sales – people increasingly prefer to research what to purchase and receive the goods without leaving home – grew 22% last year, to nearly US$18 billion, or more than R$50 billion and the country entered the list of the world’s ten largest markets for internet sales.

According to the Debt Profile of Brazilian Families disclosed by the National Confederation of Trade in Goods, Services and Tourism (CNC), the year 2014 closed with a reduction in the percentage of indebted households from 62.5% to 61.9%, while the percentage of households with overdue debts or accounts fell from 21.2% in 2013 to 19.4% in 2014 (the lowest level since 2010). The proportion of families unable to pay arrears also decreased from 6.9% to 6.3%.

Brasil is a country which increased the size of its economy by 400%, cut its debt by half, is no longer a lender from the International Monetary Fund, is the fourth largest single creditor outside of the United States, which doubled and tripled car production in 11 years, which reduced unemployment to less than 6% and, according to foreign consultants, increased its number of millionaires from 130,000 in 2007 to 230,000 last year, mainly in the new agricultural frontiers of the North and Centre-West – yet which crazy people are saying will “break” in 2015.

And if this excess of numbers is monotonous, just observe the movement in the food courts of shopping malls, bars, movie theaters, gas stations, restaurants and supermarkets; or the beaches, from north to south, crowded holidays. Is this the portrait of a country that will break in the coming months?

But if nothing is done to demystify the anti-Brazilian campaign that is under way, we could watch the “end of Brazil” as we know it. The decline in shares of Petrobras and companies like Vale, due to low oil and commodity prices, as well as the large companies connected, directly and indirectly to the gas and oil sector, due to corruption investigations could further decrease the value of national strategic enterprises, leading not to the collapse of these companies but to takeover by large foreign investors – including some that are state controlled – which have long since hoped to increase the presence in the country and the area of ​​influence of our big companies, extending to South America and Latin America.

In another era Brasil could reinforce its presence in key sectors of the economy, such as energy and mining, and buy, cheaply with treasury money, Petrobras shares, Vale and so on. Thus, in addition to making such large acquisitions – Petrobras shares are already rising  – the Brazilian government could also contribute to the recovery of the stock exchange. This alternative however, can not even be mooted while the government is pressured, practically cornered, by market fundamentalist forces that could take advantage of Petrobras problems in a fierce campaign against everything that is state or nationally owned.

With this Brasil runs the risk of unrestrained entry of large foreign groups via the stock market through the purchase of shares in Brazilian companies, with voting rights, and the eventual break-up or absorption of large national companies by the foreign competitors with the larger goal of denationalization of the economy, after the criminal delivery of strategic sectors to foreign groups – some of the capital state owned or blatantly financed by their respective countries (as was the case in Spain) in the 1990s.

Projects involving billions of dollars that maintain business for hundreds of companies and employ thousands of Brazilians are already being handed to foreign interests, whose large companies are neither free of corruption, as can be seen in the Metro train scandal in São Paulo.

To avoid this it is necessary that Brazilian society, through the main interested sectors – business associations, small businesses, trade unions, technicians and scientists who are playing major strategic roles on projects that could fall into foreign hands, to organize and position themselves. Large and small investors need to be encouraged to invest in the stock market before only foreigners do. The fight against corruption – with the punishment of those responsible – must be understood as a means to save our large companies, not to paralyze them, as they are strategic tools for national development, and increased foreign ownership is looming.

It is necessary that the population – and especially entrepreneurs and workers – realize that the more you talk about how bad the country is becoming, the more chance there is that this anti-national and hypocritical discourse contaminates the economic environment, hurting business and threatening jobs, including those who are against the current government.

It is legitimate for those who are dissatisfied to fight against the coalition in government, but not to the ultimate detriment of Brasil, and the future of Brazilians.