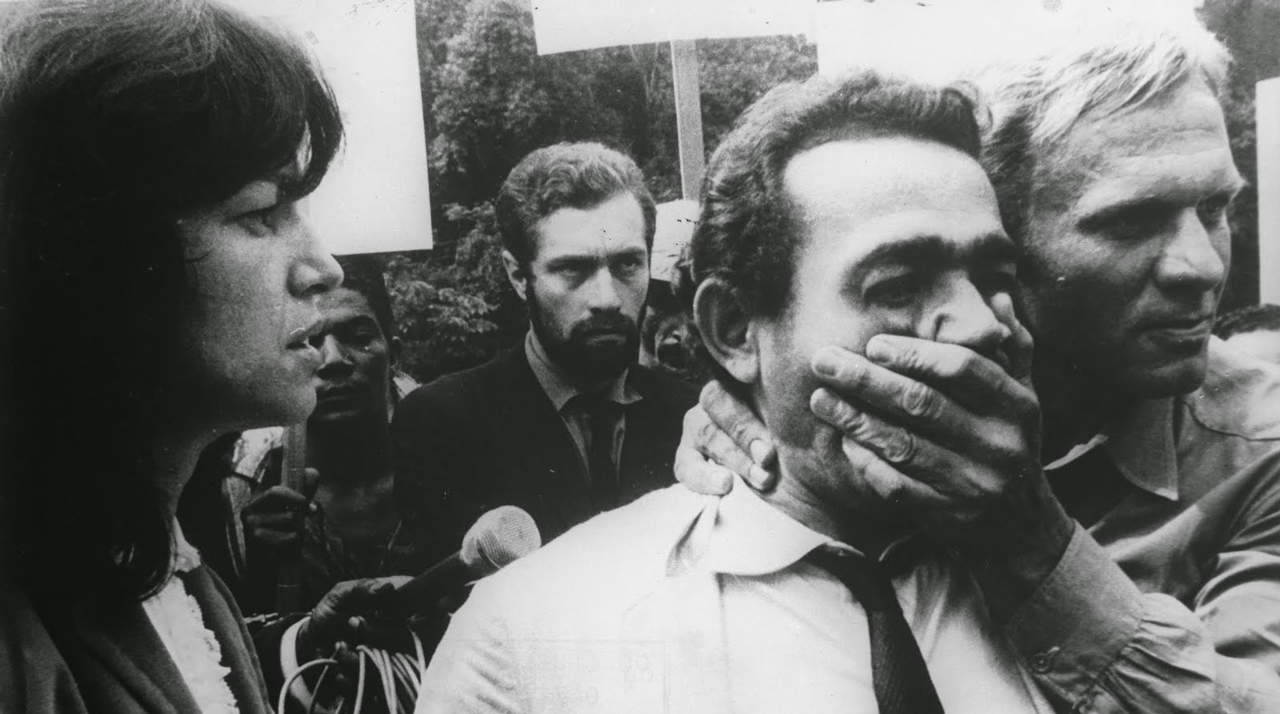 Neoliberalism at Gunpoint: Finance Minister invokes AI-5 in Washington, prepares for backlash on the streets

As Brazil’s President Jair Bolsonaro launches his new brazenly Neofascist party ‘Alliance for Brazil’, inspired by ARENA (Alliance for National Renewal) of the Dictatorship era, his ministers and foreign supporters are normalising a return to the repression of the 1960s and 1970s to protect their economic interests.

Paulo Guedes, Bolsonaro’s Chicago Schooled Finance Minister, says he has no qualms about a dictatorship style crackdown on political and press freedoms to protect his reforms.

The threat of AI-5, or Institutional Act 5, the “coup within the coup” of 1968 which ushered in the worst atrocities of the Dicatorship era, has been in the news since Jair Bolsonaro’s son Eduardo raised it on the floor of Congress and in an interview, in response to Right-Wing fears that Brazil would have its own Chilean style anti-Neoliberal mass protest movement.

Historian Fernando Horta described AI-5 as having been designed to “attack the future”.

Following Eduardo Bolsonaro’s remarks, Bolsonaro’s head of institutional security, and disgraced former commander of Brazil’s UN mission in Haiti, General Augusto Heleno, remarked that exactly how a modern “AI-5” could be implemented would need to be studied.

“Don’t be afraid if someone orders AI-5” Guedes told assembled journalists and business leaders at a press conference in Washington D.C. on Monday 25 November 2019. The event featured ten executives each from the United States and Brazil, and US Secretary of Commerce, Wilbur Ross.

Guedes also criticised the recently released former President Lula, who he accused of stoking such protests with his calls to defeat fascism and restore democracy in Brazil.

“Calling the people to the street is irresponsible.” Guedes insisted,  “I think it’s insane.”

Guedes was asked by one of the journalists whether this apparent slowdown in reform was not a fear of former President Lula, who has been fiercely critical of the Bolsonaro government’s economic agenda.

Guedes reassurred his audience in Washington D.C. that Bolsonaro was not afraid of Lula.

Meanwhile the Far-Right President is pressing for impunity for police and military – effectively license to kill – ahead of such demonstrations reaching the largest Country and Economy in Latin America. Bolsonaro has admitted that new Guarantee of Law and Order proposals are a measure to suppress such protests. He is banking on fear of repression seen elsewhere and in Brazil’s own history will keep the streets empty.

Journalist Gabriel Deslandes remarked: “Paulo Guedes is right to raise the hypothesis of a new AI-5: it is only in a context of pure repression that an armed robbery against the Brazilian people, such as is proposed in Administrative Reform PEC, can be carried out. A typically Pinochetist proposal, aimed at untying resources from constitutional funds that pay unemployment insurance and wage allowance, and cut up to 25% of the salary of civil servants of all levels. Paulo Guedes’s plan is to pickpocket Brazilian workers and to leave the country permanent hostage to fiscal terrorism. Ultimately, he’s right: to politically sustain an “economic AI-5″ like this, could only be done with a real new AI-5, with bullets, beatings, and bombs, Chile-style – a country he loves so much.”

Meanwhile, historian Jones Manuel lamented media reaction to Guedes invocation of AI-5: “I confirmed what I suspected. Jovem Pan, and other media outlets, are normalizing and defending Paulo Guedes’ liberal-fascism and his defense of AI-5. Do you want to know how a reactionary dictatorship is created? Look around. Everything is happening here and now!”

A range of measures, dubbed the “Digital AI-5” are already in progress. PL2418/2019 which legalises the monitoring of instant messaging applications, PL1595/2019 which establishes Anti-Terrorist forces, PL443/2019 which defines public demonstrations and occupations as acts of terrorism, PL2289/2019 requires users of social networks to hand over their social security number, ending anonymity online, and DL10.046/2019 which will allow the crossing of databases containing personal, biometric and genetic information.

Bolsonaro’s increasingly authoritarian regime came to power through disputed means, with the support of the military, connivance of Judiciary and involvement of the United States Government Department of Justice.

Americas Quarterly is the in-house magazine of Council of the Americas (AS/COA), the de-facto corporate arm of US power in Latin America, which was formed in the early 1960s specifically to counter the spread of left-wing governance in the region. It had a direct role in fomenting Brazil’s 1964 and Chile’s 1973 Coups, and has normalised or supported every US-backed regime change effort in the hemisphere since.

AQ, which has breathlessly championed Guedes in the past, are also concerned that the wave of protests across the continent might slow his ultra-liberal reforms which have been of enormous benefit to COA’s corporate members such as Cargill, Chevron and Boeing. Guedes even proposes a merger of Banco do Brasil with COA elite member Bank of America.

As security forces and fascist paramilitaries massacre civilians in Bolivia, AS/COA and its personnel have doubled down on support for the coup government and denial that a coup has occurred. Its editor in chief Brian Winter took to social media to criticise Lula following his remarks on confronting Bolsonaro and the extreme-right, and how Venezuela had, unlike Bolivia, managed to resist US Government intervention.

Winter is skeptical that the wave of protests in Latin America will reach Brazil. Wishful thinking perhaps. It is the last thing he or his employers would want, as the status quo in Brazil serves them perfectly. Previously AS/COA and Americas Quarterly had championed discredited anti-corruption operation Lava Jato and its fallen hero Sergio Moro, now Bolsonaro’s Justice Minister. Moro was the Inquisitor-Judge behind Lula’s 580 day jailing, intended to prevent his Presidential Candidacy in an election he was on course to win. Lava Jato was also central to the campaign to impeach Dilma Rousseff, and used strategically to that end, as revealed by leaked conversations published by the Intercept.

Two separate U.S. congressional inquiries into the U.S. Department of Justice’s role in Lava Jato and Lula’s prosecution are pending.

Despite human rights and environmental concerns, Jair Bolsonaro’s Far-Right Administration has the open support of the United States and United Kingdom Governments.

Following Guedes comments, the Brazilian Real fell to a new record low against the US Dollar.