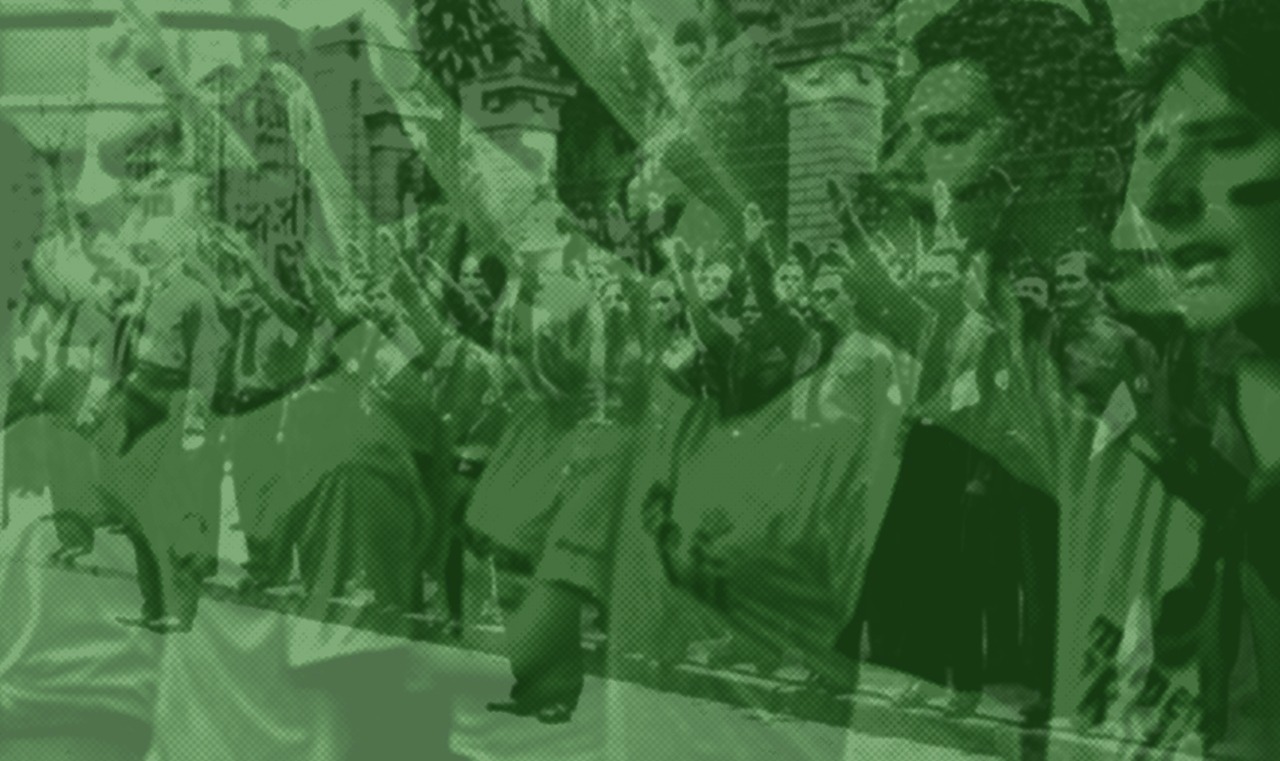 Brasil’s fascist “green hens” are back

During the 1930s, Brazilian fascists, called the “Green Hens” by their opponents, beat up communists and  praised God, family and liberal economic policies. In this article Wilson Luiz Müller says they’re back.

This is not a “Back to the Future” style science fiction story. If a Brazilian was frozen during the 1930s and woke up in 2019 he would be shocked. Immediately recognizing the prevailing fascist ideals and practices, he would certainly say something like, “I would have bet my life that the green hens would never have become a political force representative of society. Who would have predicted that they would end up running the nation! Can you send me back to the past? It was much better exchanging harmless punches with the green hens.”

Intercept Brasil journalist João Filho writes that Jair Bolsonaro’s new political party, Aliança pelo Brasil (Alliance for Brazil) is Brazil’s first neo-fascist political party. He says the party’s founding manifesto is an assortment of fascist buzzwords. “There is nothing there that resembles a national project, that preaches conciliation, that presents proposals for the economy and social development. […] The words ‘God’, ‘homeland’ and ‘family’ are prominently featured in the party’s presentation to the public. It seems like no coincidence that these words formed the slogan of the Integralists. […] Inspired by Italian fascism, Integralists were an ultra-reactionary movement created in Brazil eight decades ago advance fascist ideas. The Ação Integralista Brasileira (Brazilian Integralist Action) and its sympathisers played a key role in the 1964 military coup and currently support the Bolsonaro government. ”

The symbol of Integralism (featured on the armbands worn by its uniformed supporters) was the Greek letter Sigma (∑). Given its inspiration from the remote past and ideals of preserving tradition, one can imagine Bolsonaro’s party adopting a symbol based on Sigma, with a small adjustment. They could turn the symbol clockwise, staying faithful to its grotesque aesthetics while enabling it to form an “M” for militia. The legs of the M could curve inwards into a map of Brazil like two vampire teeth. It would be the final expression of the Integralist vision – imposed by force – of a walking and venomous swastika, adapted to a tropics that is victimized by lies and infamy. The symbol would also serve to depict Integralist collusion – the collusion of the green neo-hens with the economic and political elite and its servant plutocracy that feeds off the State as the country goes down the toilet. This symbol would fit like a glove on a party for which the concepts of fatherland, god, and family are offered like bottles of snake oil that promise to cure all evil while poisoning their naive patients.

Although Sigma is the most appropriate symbol for the party, during its launch it featured another image: the stylized symbol of a horseshoe studded with cartridges and machine gun bullets. This also comes in handy because it accurately represents the goals and worldview of the new party. During the neo-fascist inauguration party the crowd rhymed “we need signatures”, referring to a requirement for party registration, with, “we want to kill leftists.”

As it turns out, the green neo-hens are no longer interested in trading punches with communists. Now they prefer a faster and more definitive solution. The new neo-fascist party’s ballot number says it all: 38. We are lucky that the MDB party already uses 15. Otherwise it would be AR 15 to represent the most popular non-Russian assault rifle. The main goal of this new coalition is to fight against the terrible communists. It’s a difficult task. After all, where can you find communists these days?

Integralists were known as green shirts for the uniforms they wore at public demonstrations, but their opponents called them “green hens”. They favored economic liberalism over anarchism and communism. There were many street fights during the 1930s in which the green hens clashed with the anarchists and communists. During the 1930s, the number of Brazilian integralists/fascists was estimated at between 600,000 and one million.

The largest Integralist demonstration ever took place in conservative Curitiba, home of the Lava Jato investigation, in 1937

On Sunday, November 17, thousands of Morominions and Bolsominions took to the streets to show their non-conformity with democracy. In some places they marched to the sound of hymns praising the dictatorship and saluted the Havan department store Statue of Liberty, while shouting insults against the Supreme Court and its justices.

“Men in green will rise if needed,” the leader of one of these protests shouted, in a very peculiar Portuguese, as he asked the crowd to visualize the idea that they were stomping on the head of Supreme Court Justice Gilmar Mendes. Mendes is the chosen Christ of the hour – a symbol of all that is negative in a minimally civilized bourgeois democracy. According the medieval vision of the green hens, Gilmar Mendes is the symbol of that damn Supreme Court which just repealed the Lava Jato investigation’s 2016 exception to the Brazilian Constitution. The court’s ruling had a side effect (look at that!) of releasing Lula and other people who were imprisoned without honoring the constitutional right to appeal in freedom. There was no evidence that all the troops who marched around the Havan statue of liberty were able to synchronize the idea in their heads with the movement of their hooves – oops, feet – due to their lack of rhythm, but the thought of crushing Gilmar’s skull visibly caused them to stamp harder on the pavement.

All of this may have sounded irrelevant if it were not for the fact that we are living in a time, as journalist Louis Nassif says, when ignorance has been elevated to the condition of virtue. In the article “Bolsonaro is the revenge of the common man,” Nassif says that “Bolsonaro was the ultimate expression of this state of mind, not for intrinsic qualities of Statesman, but for representing pure barbarism. […] Bolsonaro is the embodiment of the stupidity of the common man. Bolsonaro’s direct identification with stupid people from all walks of life produces unprecedented phenomena of solidarity. When their lack of qualifications is highlighted, the average Bolsonaro supporter feels personally offended. When an ignorant Bolsonarist is disqualified by an expert, all ignorant supporters feel afflicted, the ignorant businessman, the ignorant taxi driver, the ignorant small town member of the middle class. Ignorance generates the most universal inferiority complex that exists because it attracts all kinds of people regardless of social class.”

There are those who will say that these pathetic acts do not deserve to be taken seriously. Really? The fact that these grotesque people were not taken seriously has ended up causing a lot of problems for serious and sensible people. And as a reward for their lack of shame in exposing themselves as the synthesis of all that is most grotesque in human nature, these people have gained control over the Republic. The marchers in that protest will surely become the militants of the new neofascist party that is being organized by the Bolsonaro clan. Once they have the machinery of the Republic at their disposal, they will no longer seem pathetic. With power in their hands, the pathetic and grotesque are not funny at all.

The most optimistic will say that Bolsonaro is isolated without the necessary support from other parties. Does he need this to achieve his purposes? He is likely to reform his cabinet – defending some of the notorious ministers who haven’t been able to do anything decent – during negotiations with his former party, the PSL. He will choose new ministers of equal caliber but it will be a year or so before the slavish corporate media begins to make occasional criticism. As long as Paulo Guedes’ economic agenda – in the interests of big financial capital – continues to be implemented, nothing indicates that Bolsonaro and his gang, now 100% in tune with the dictatorial purpose, will have any problems moving towards regime closure and destruction of Brazilian democracy.

Celso Rocha de Barros writes, in Folha de São Paulo, that, “creating the Alliance for Brazil is another step in the plan to destroy democratic institutions […] As in the case of several other Bolsonaro measures it is either a scam or an unprecedented level of stupidity – and I don’t think Bolsonaro is dumb. The Alliance for Brasil makes no sense as a democratic governing party, but as a coup move it is so typical that it is boring. Eduardo Bolsonaro will run the machine for his father. The son of a powerful dictator becomes a cliché. Eduardo makes no secret of his sympathy for the authoritarianism of Viktor Orban’s Hungarian government and is the Brazilian representative of the charlatan bum Steve Bannon. ”

The fact is, however, that the dictator’s son will not represent  the charlatan Steve Bannon – he’ll pledge allegiance to  Queiroz’ organized crime militia.

Do not expect the institutions to ban people from doing pathetic things. Protests like the ones we’ve seen so far, whether by the green hens or not, exist under every regime in the world. That is not what brings us to the door of fascism. The risk comes precisely from institutions of the democratic rule of law losing their ability to enforce the Federal Constitution. When the institutions allow their principal agents, by sympathizing with the green hen agenda, to no longer do their jobs enforcing the law but to act according to their political-ideological beliefs, the State itself opens the door to fascism. Fascism walks in, settles down and merges with the very structure of the State. By combining acts and omissions, state agents enable and stimulate the advance of the green hens agenda within the institutions, demoralizing them. This generates a poor awareness level of democratic dysfunction and advances an ideology that leads to the death of democracy.

When they praised the dictatorship and the killing of political opponents, we said they were controversial.

When they wrote that it is impossible to do what is needed for Brazil in a democracy, we said they had bad grammar and could not express themselves properly.

When they drew out their world view, we said their aesthetics were grotesque and ours were more elegant and universal.

Since we still don’t understand, they are making signs studded with images of bullet shells clearly announcing what they want to do. We respond by calling the images tacky.

When the time comes that we need to use the right words to define the facts, we may no longer be allowed to.

When are we going to start using the right words?

When are we going to start calling fascists fascists? When will we start complaining that they want to install a fascist dictatorship in our country?

This article originally ran in GGN, was translated by Brian Mier, and can be seen in its original portuguese here.