On May 15, a coalition of left political parties, unions and civil society organizations finalized impeachment request 31 against Brazilian President Jair Bolsonaro. In this interview PT Congressman Enio Verri explains why this process is different, what its chances are, and why it is so important to remove Bolsonaro from power immediately.

Congressman Enio Verri began his political career in Paraná in the 1980s as an activist in liberation theology ecclesiastical base organizations like the Workers Pastoral. He affiliated with the Partido dos Trabalhadores (Workers Party/PT) in 1985. Today, like many elected officials in PT party he is also a university professor, holding a Phd in Latin American Regional Integration from the Universidade de São Paulo (USP). On Friday, May 15th, together with representatives of two other political parties and over 200 civil society and labor organizations, he filed an impeachment request in Brazilian Congress against right wing extremist President Jair Bolsonaro . As Bolsonaro’s popularity continues to fall, however, Congresional President Rodrigo Maia (DEM) is currently refusing to act on multiple impeachment requests. On the evening of May 15th, I caught up with Congressman Verri to ask why this impeachment request is different from the others and how he thinks it could be successful.

Why does PT support the impeachment of Jair Bolsonaro?

This is a moment to prioritize fighting the pandemic. This pandemic has created 3 crisis, which are the public health crisis, the social protection crisis and the economic crisis. And Brazil has a 4th crisis, unlike the rest of the world, which is its political crisis. We have a President of the Republic who promotes denial – he denies history and science. He doesn’t recognize recommendations from the World Health Organization, he is against social isolation and his practices have increased Brazil’s mortality and extreme poverty levels. Since he has become President of the Republic he has neglected the responsibilities of his role as someone who was elected to serve the public. Thefeore, out of our concern in fighting the pandemic we came to the conclusion that he does not have the minimum capacity needed to govern this country during normal times, much less so during a time of crises like these ones. This is why we submitted an impeachment request to Congress today. 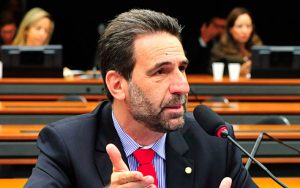 When the US Democratic Party initiated impeachment proceedings against Donald Trump, a lot of people complained that Vice President Mike Pence would be even worse. In that same sense, what good would it do to remove Bolsonaro from power to put an army general back in the presidency? Why not fight to cancel the illegitimate 2018 presidential elections and hold new elections instead, because of the electoral fraud?

There has been no court ruling yet that establishes that the 2018 elections were fraudulent, although the Workers Party has filed charges. There are cases pending but they are all bogged down in the Supreme Court right now. Due to this, when we were making our decision on whether we should file an impeachment request during the meeting of the our executive directorate in Brasilia today, we decided on two paths. The other political parties have only submitted impeachment requests and the result of this process would be that that you mentioned – they remove an army captain, and the Vice President, who is an army general, moves into his place. We filed our request together with 3 left wing political parties and over 200 peoples organizations including neighborhood associations, churches and labor unions. Second, as members of Congress we are pushing for Constitutional Amendment 37, which is a proposal made by Congressman Paulo Texeira from São Paulo (PT) and Congressman Henrique Fontana from Rio Grande do Sul (PT). It stipulates that, in the case of an impeachment, new elections have to be held. Our rallying cry is “impeachment and new elections”. Because, otherwise, as you said in your question, we will remove Bolsonaro, a captain, and a general will take over. If that happens there will be no concrete results in terms of the conception of the State and social change – nothing will happen.

Congressional President Rodrigo Maia is already sitting on 30 impeachment requests against Bolsonaro. Why is Congress acting so cautiously in terms of starting an impeachment hearing?

Congress is a reflection of social pressure. The impeachment of ex-President Collor [Fernando Collor de Mello 1990-1992], during the 1990s and the coup against ex-President Dilma Rousseff [2016] where only enacted when the popularity of the respective presidents had dropped to 10%. Today Bolsonaro has an approval rate of between 27%-30%. He still has a strong social base. This is why the Congressional President has looked things over and doesn’t think he has enough support to push through an impeachment. It is important to emphasize that this week, President Bolsonaro invited the so- called “Centrão” [a group of powerful center-right and right wing political parties including PMDB and DEM] into his congressional coalition. This will increase the size of his political base. If we didn’t have the 2/3 votes needed to guarantee the impeachment of the President before, now with this deal between the Centrão and Bolsonaro which is made through the President’s guarantee of cabinet positions and strategic governmental roles, the number of Members of Congress who would be willing to vote for impeachment has shrunk significantly. Due to this, our strategy to push through this impeachment procedure is to work with political parties, neighborhood and professional organizations, churches and labor unions, to mobilize the people so that the social support for Bolsonaro continues to drop. We believe that if Bolsonaro’s approval rating drops from 30% to 20%, Congress will be more willing to vote in favor of Bolsonaro’s impeachment.

Many people are saying that, since the illegal impeachment of Dilma Rousseff in 2016 and the political imprisonment of Luis Inácio Lula da Silva in 2018, the Rule of Law has disintegrated in Brazil. Do you think there is any chance that this impeachment will really work? If so, what would it’s implications be for the 2022 elections?

We are supporting this impeachment request because we understand that in this huge crisis that the world is experiencing – which is even worse in Brazil – we urgently need a President of the Republic who will assume his responsibility to prioritize the lives of the Brazilian people. We are absolutely convinced that Bolsonaro does not have the ability to do this. Whether it will be Vice President Mourão or whether new elections are held – this isn’t our biggest concern at the moment. Our biggest priority is for Bolsonaro to be forced out because if this doesn’t happen the number of people who die could reach the millions. Refering to your question about the Rule of Law, the Workers Party was built to defend the Constitution. We played a gigantic role in the drafting of the 1988 Constitution and to this day we understand that it is a very progressive document. There is no doubt that the coup against Dilma Rouseff was a key moment of the beginning of a process of deconstitutionalizing Brazil. This process deepened during the Temer government and during the Bolsonaro government. There were a very large number of constitutional amendments approved that reduced the role of our Constitution, removed its role guaranteeing social inclusion, the universalization of rights and the construction of citizenship. Today it’s weight in terms of building citizenship is very light – it was demolished. However, we still have to remove this President. We understand that with a new election we can return and strengthen what is left of the Constitution or who knows – as this is also a dream of the Workers Party – build a new Constitution that is centered on the interests of the Brazilian people as was the Constitution of 1988.