Everyone who cared about Democracy who was paying attention to what was happening in Brazil knew, from day one, that Lula’s arrest was a sham result of a biased political witch hunt led by right wing extremists in order to remove him from the presidential race. The Intercept revelations now prove, unequivocally, that they were right.

August 20 marks the 500th day of political imprisonment for leftist former Brazilian President Luiz Inácio Lula da Silva. For 500 days, he’s been held in solitary confinement in violation of the Mandela Rules, in the federal police headquarters in Curitiba, for a crime that neither the prosecutors nor disgraced former judge Sergio Moro could even clearly define: undetermined acts of corruption. For 500 days, a permanent group of hundreds of union and Movimento de Trabalhadores Sem Terra (Landless Rural Workers Movement/MST) activists, which rotate members on a regular basis, has been camped out in front of the Curitiba federal police headquarters yelling “good morning, good evening” and “good night” and sing songs to Lula. From his windowless cell, he can hear them.

Thrown in jail as part of a joint US Department of Justice/SEC/Curitiba Public Prosecutors Office investigation based on one coerced plea bargain testimony made by a known liar who changed his story three time in exchange for a 90% sentence reduction and partial retention of millions of dollars in illicit assets, no material evidence was ever shown implicating Lula in any crime. The Intercept has now revealed leaked social media conversations that show massive illegal collusion between then-judge Moro (who received a cabinet position in the right wing extremist Bolsonaro administration for removing Lula from last year’s elections), the Lava Jato prosecutors and at least two members of the Supreme Court. These leaks prove, without a shadow of a doubt that Lula is a political prisoner and was arrested specifically to prevent him from winning the 2018 Presidential elections, opening up the door for Jair Bolsonaro, who was polling at less than half the popularity of Lula even after he had been in jail illegally barred from contact with the press for 3 months.

On the day Lula was ordered to turn himself in, tens of thousands of supporters surrounded the ABC Metallurgical Workers Union headquarters begging him not to do it. I was there and filmed it, to have some proof against the foreign correspondents in case they tried to downplay or ignore it. Shortly before he turned himself in, Lula, gave a speech to the tearful crowd saying, “there is no point in trying to end my ideas, they are already lingering in the air and you can’t arrest them. There is no point in trying to stop me from dreaming, because once I cease dreaming I’ll keep dreaming through your minds and your dreams. There is no point in them thinking that this will cease when I have a heart attack. That’s nonsense, because my heart shall beat through your hearts, and they are millions of hearts. They can kill one, two or 100 flowers, but they will never prevent the coming of the spring.”

Immediately after Lula’s arrest, the AFL-CIO, representing 12.7 million US and Canadian union workers, delivered a letter to the Brazilian embassy in Washington demanding Lula’s release, saying, “Lula’s persecution, conviction and detention are more than a violation of his human rights. They are a bald political maneuver to prevent him from running for president in the October 2018 election. He has long led all polls taken on the upcoming election and we cannot allow him to be barred and Brazil to suffer another denial of democracy. Given his innocence and the lack of any evidence, Lula turned himself in to the authorities in Curitiba. In Brazil and around the world union, human rights and democracy activists are mobilizing support for Lula and democracy in Brazil.”

Led by by Rep. Mark Pocan (D-Wis.), 29 US lawmakers, including Sen. Bernie Sanders (I-Vt.)—delivered a similar letter to the Brazilian embassy saying that Lula “was imprisoned following a highly questionable and politicized judicial process in which his rights were apparently violated,” and that there is “reason to believe that the main objective for his jailing is to prevent him from running in upcoming elections.”

Renowned intellectuals around the world, like Noam Chomsky and Angela Davis, declared Lula a political prisoner, something that Brasil Wire also declared immediately after his arrest. 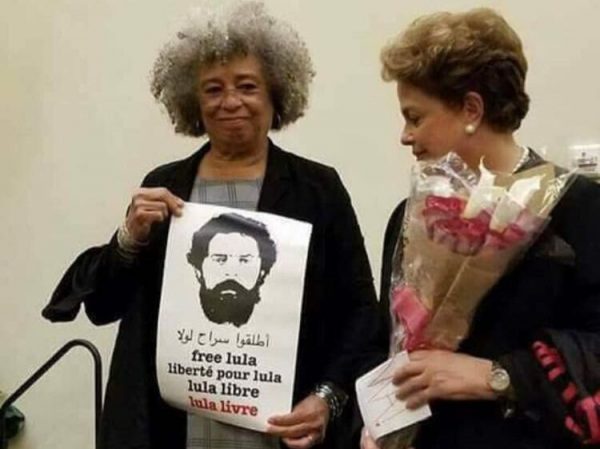 Angela Davis knows a political prisoner when she sees one

In short, everyone who cared about Democracy who was paying attention to what was happening in Brazil knew, from day one, that Lula’s arrest was a sham result of a biased political witch hunt led by right wing extremists in order to remove him from the presidential race. The Intercept revelations now prove, unequivocally, that they were right.

The most prominent voices in the mainstream press, however, did everything to normalize Lula’s arrest by glossing over important details, such as the fact that the judge in charge of admitting or rejecting evidence in the investigation was allowed to rule on his own case, in a legal loophole which dates back to the inquisition. They also ignored the fact that the trial took place with no jury and the US DOJ was a partner in the investigation. The Guardian lied about the crime Lula was convicted of, saying his conviction was part of an R$88 million graft scheme, to deliberately make it seem more serious. In the New Yorker, former Bloomberg journalist Alex Cuadros, who for some bizarre reason is still perceived as a progressive in some US circles, called Lula’s arrest, “the most important criminal conviction in Brazil’s history”. Citing no source, he gave the misinformation that, after Lula’s arrest while he was still leading in the polls with more support than all other candidates combined, “95% of Brazilians support Operation Car Wash”. Despite the fact that no crime had been clearly defined in Lula’s conviction, and no material evidence presented, Cuadros said, in a patronizing manner, that “Lula lived up to an old Brazilian saying, “rouba mas faz”—“he steals, but he gets things done.”

To anyone paying attention, these journalists and media groups were acting as stenographers for regime change. They were buttering up their readers for the return of fascism and the pillaging of Brazil’s natural resources in direct benefit of their corporate advertisers. But this is all water under the bridge now, because the Intercept revelations prove, without a doubt, how wrong they were. The only thing left for them now is damage control.

But what is happening with Lula’s case right now? Is there any sign he will be released?

Early Sunday morning, a new chapter in the #VazaJato scandal made the political persecution to which former President Luiz Inácio Lula da Silva is victim of more clear than ever. Conversations between prosecutors revealed by the Folha de São Paulo newspaper in partnership with the Intercept Brasil show that the Lava Jato task-force broke the law to access data protected by the Brazilian Internal Revenue Service without authorization. The illegal act was practiced repeatedly, including against former President Lula in the case of the Atibaia country home. The man who illegally provided the information to the prosecuting team was promoted by Sérgio Moro after Jair Bolsonaro assumed the presidency and is now serving as the director of the Conselho de Controle de Atividades Financeira (COAF/ the Federal Government Financial Activities Control Board), which is responsible for investigating corruption committed by government officials – the same agency that has buried the money laundering investigation into Jair Bolsonaro’s son Flavio and Rio de Janeiro’s Escritorio do Crime militia.

This Sunday, Lula’s defense team issued a statement reaffirming that the former President is “victim of a conspiracy by public officials who worked to convict him even though he had not committed any crime – with the goal of removing him from public life and damaging his honor and reputation.” The defense lawyers Cristiano and Valeska Zanin explain that the messages revealed on this Sunday are directly related to two “clearly corrupted” trials – the cases of the triplex apartment and the Atibaia vacation home – “in which unfair convictions against Lula were made, one of them used to deprive him of his freedom through an premature administration of his sentence.”

Due to the succession of facts that have been revealed about the criminal behavior of former Judge Sérgio Moro and the public prosecutors, the Workers Party (PT), which is still the largest political party in Brazil’s Congress, recently announced plans, together with the other left of center parties, to create a Parliamentary Investigation Commission (CPI) to investigate the criminal organization created within the context of the Lava Jato investigation. According to the PT Congressional Bloc leader Paulo Pimenta, the investigation task-force transformed into a “criminal organization which hijacked an investigation to persecute adversaries, protect friends and personally enrich members of the task force.”

The Brazilian Federal Supreme Court, some of who’s ministers have been compromised by the leaked Telegram messages, is scheduled to rule on Lula’s appeal but has continually delayed it. It is hard to say how long Lula will remain in jail, therefore, and his situation is further exacerbated by the fact that 35% of the population, mainly the majority white upper middle and middle classes, blinded by class hatred and years of media character assassination against the PT party, don’t seem to care if Lula is innocent our not or if his prosecutors acted corruptly to throw him in jail. This problem is exacerbated by the fact that the rule of law has disintegrated so much in Brazil since the  2016 coup that even if the Supreme Court overthrows the charges against him, one wonders if the military will allow his release. Meanwhile, day in, day out, in the morning, afternoon and night, people continue to travel from all over Brazil and the world, just to yell, “Good morning, President Lula!” And from his cell in solitary confinement, he can hear them.